Stop the Greed: Build a Green Economy for All 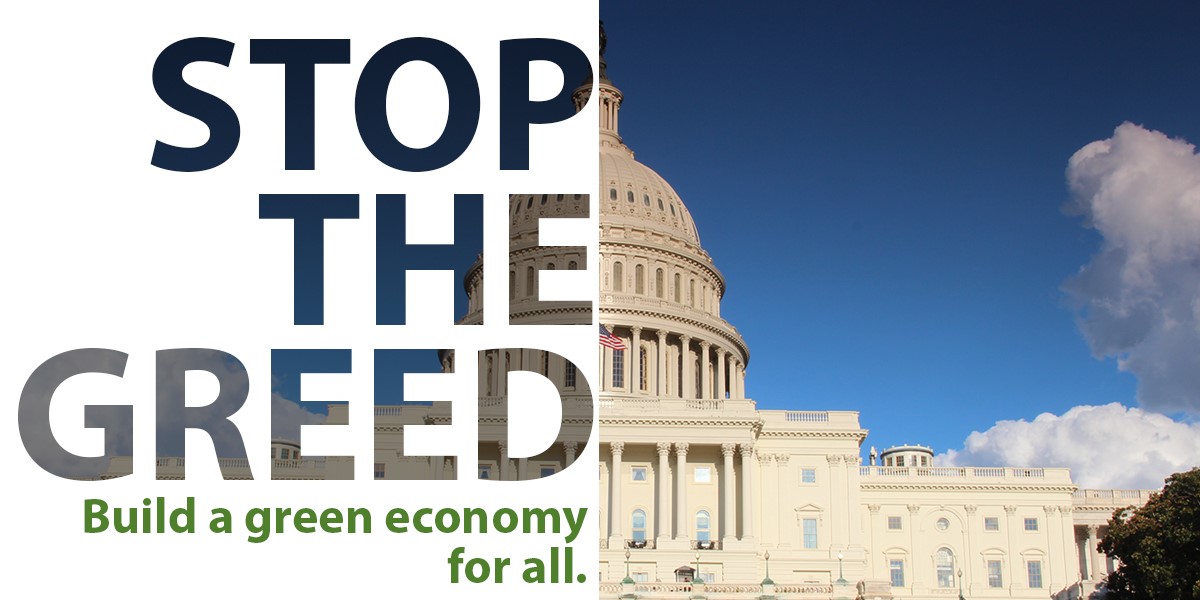 Business as usual is not working for people or the planet. We see climate change impacting communities and ecosystems across the globe. Income inequality is harming democracy in the US and destabilizing nations worldwide. Soil, water and human health are imperiled by factory farming and industrial agriculture. We still have not recovered from last decade’s economic crash caused by an out of control financial sector. Every day, more scientists and analysts add to the growing body of evidence that we must prioritize sustainability in every sector.

At the same time, we have seen tremendous progress towards creating a green economy, which Green America defines as an economy that works for both people and the planet.

No one would have predicted these successes 30 years ago, when Green America was founded with a mission of creating a green economy. We knew that the only way we could create a world that worked for all people and the planet was by creating an economy that promoted both environmental sustainability and social justice.  We need to make sure that there is a rapid increase in clean energy, to reduce climate change emissions and protect the most vulnerable communities from pollution.  We need a sustainable agriculture system, to reduce poisons in our food and water, and protect the rights of people working in the fields.  Thanks to concerted efforts by consumers and investors working towards the vision of a better world we’ve achieved many successes.

Not everyone is pleased to see the rapidly-growing green economy. The election of 2016 has shown the forces of greed striking back. Donald Trump’s cabinet appointments are a who’s who of the billionaire class and their servants in Washington, with goals aimed to line their own pockets.

The forces of greed also seek to divide us – they work to pit white people against people of color, long-time citizens against recent immigrants, men against women, people living on the coasts against people living in the heartland.  That’s why we must all work to build bridges between people and promote a green economy that works for us all.

What We Can and Will Do

When leadership in Washington is at its worst, that is the time when we need to be at our best. The American people are not supportive of the greed agenda, and poll after poll demonstrates that the vast majority of Americans want a rapid transition to clean energy, safe and healthy foods, good-paying jobs for all, healthcare for all, and a reliable and healthy financial system.

Despite deep opposition from corporate America and several hostile administrations, Green Americans  have been growing the green economy by putting their dollars into truly sustainable products and practices. Voting with your dollars is more important now than ever.

We’ll tell you which companies and products to avoid, the leading companies to support, and ways you can use your banking and investments to support communities and businesses that support people and the planet.

We’ll continue to share resources about how to join together as communities to oppose the alarming rise of hate that we are seeing nationwide.  A country that supports inclusiveness must be built up starting from the community level.

When consumers speak up loudly, corporations listen – use your voice and #VoteWithYourDollar!

We’re going to hear a constant barrage of negative news out of Washington and frequent attacks on the green economy.  We shouldn’t let this news get us down, instead, let it energize us to create the world that we all deserve – one that puts people and the planet first.  When we work together to create a green economy, we are unstoppable.  It won’t happen overnight, but the green economy has been growing for decades, and if we all take actions – as consumers, investors, and voters – we can make an economy that truly works for all.

Please join our email list to get the latest actions from Green America and share them with friends and family.