Citizens United and the Battle for GMO Labeling 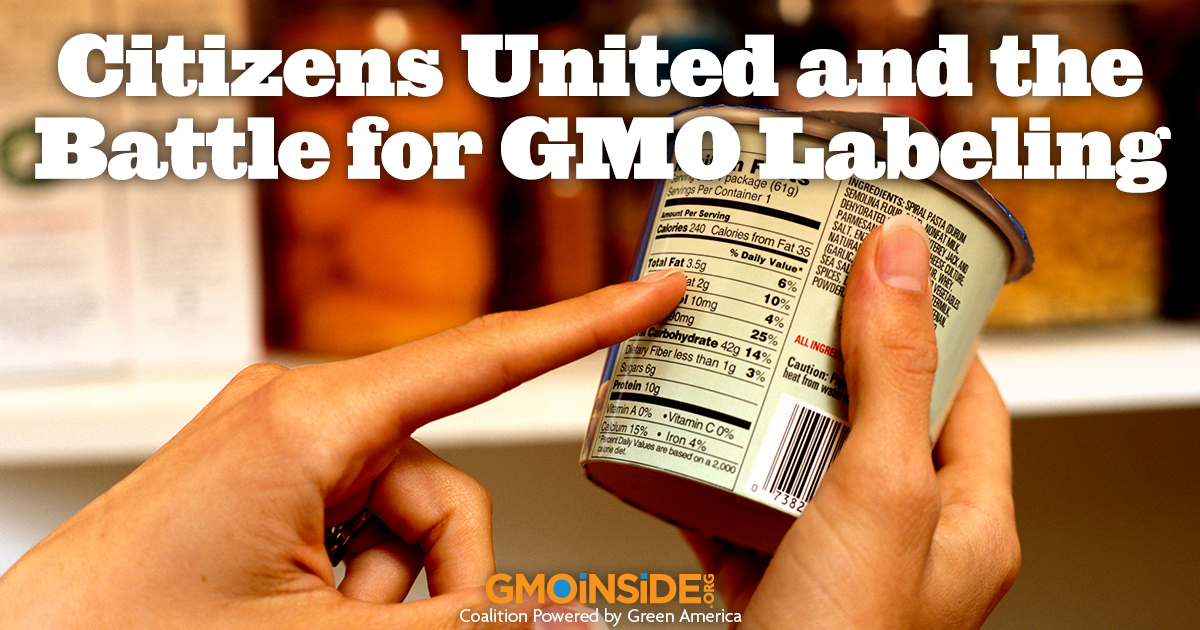 January 2015 marked the five-year anniversary of the ruling on the Supreme Court case Citizens United v. Federal Elections Commission, a decision that would change the fate of politics in our nation. Surrounding the anniversary, a number of news outlets and non-profit organizations including Huffington Post, Greenpeace, and Grist wrote about how Citizens United has impacted the discussion around climate change. But the lasting environmental impacts of this landmark decision go way beyond climate change legislation, ultimately impacting our global food system.

But let’s start at the beginning and clarify exactly what legal ramifications came out of this landmark decision. The biggest change that came out of Citizens United was that the Court narrowed the traditionally held anti-corruption rational for limiting corporate campaign spending. Traditionally, corruption had been defined as “the use of campaign spending to obtain any type of “undue influence.” The majority determined that independent contributions did not pose any risk for corruption. This decision removed the limits that corporate interests and trade associations could spend on campaign contributions. Most unexpectedly it resulted in a number of wealthy individuals making large contributions to campaigns. With income inequality already a major issue in the US, this decision allows wealthy members of society to have a greater voice in and control over the political arena. Ultimately, this decision birthed the reign of large Political Action Committees (Super PACS) that are able to pool contributions of unlimited size and use them to support candidates.

The court refused to see the very clear influence unfettered independent spending would have on politicians. While campaign spending has become more consolidated among the wealthy few, general trust in all three branches of government is at an all-time low as voters question whose interests the government is actually representing.

How does this affect our food system you ask? Representatives Pompeo (R-KS) and Butterfield (D-TX) have introduced the Safe and Accurate Food Labeling Act (HR 1599), more commonly known to sustainable food advocates as the Deny Americans the Right to Know Act (DARK Act). This bill was written by the Grocery Manufacturers Association (GMA) and intended to pre-empt states’ rights to introduce, pass, and implement mandatory GMO labeling laws. Both Pompeo and Butterfield received campaign donations from the GMA during their 2014 campaigns. Citizens United allows an association such as the GMA to contribute as much funds as they want toward federal campaigns. The funds that are contributed by the GMA are made up from donations and membership fees from some of the largest food corporations, such as General Mills, Kraft, and Starbucks.

It is clear that an overwhelming number of people want labels on foods produced with genetically engineered ingredients. And while the direct spending to defeat statewide labeling initiatives is not a result of Citizens Untied, but rather from First National Bank of Boston v. Belotti, a decision that allowed corporations to directly contribute to state ballot initiatives. The fight is now at the national level where such unchecked spending, legalized by Citizens United, is coloring the view of politicians, despite the clear will of the people to establish their right to know.

Citizens United has major international ramifications as well. Politicians are in the process of discussing two major trade agreements, the Trans Pacific Partnership (TPP) and the Transatlantic Trade and Investment Partnership (TTIP). Companies and trade associations, like the GMA, are trying to remove regulations in other countries put in place to protect both their people and environments in response to the will of the people. For example, US Trade Representatives working off corporate messaging are trying to get the EU to agree to allow banned antibiotics and pesticides that have been proven to cause harm, yet we continue to use them in the US. It is unacceptable for corporations to use money and power to prevent the will of the people from coming to fruition; but it’s simply inexcusable for these companies to use their influence to overturn long standing food labeling and food safety regulations abroad.

One has to ask if the Supreme Court is simply that naive to believe that corporations and wealthy individuals, all with their own political agendas, don’t influence political decisions. Or do they just have such great hope for citizen involvement in elections that politicians and corporations will be held accountable by the voters?

If we continue our current system of intensive industrialized agriculture, a system heavily linked to GMOs and toxic pesticides, there are going to be lasting environmental impacts. To get an idea of the public, animal, and environmental health impacts associated with just one sector,  check out the recent infographic and report,  Starbucks: From Crop to Cup—The Impact of Sourcing Industrial Conventional Milk. Continuing with business as usual means more top soil loss, soil health nutrient depletion, water contamination, pollution, and loss of key pollinator species responsible for one in three bites of food. All of these are contributing factors to the long term sustainability and security of our food system and environment.

It is time to put a stop to such corporate influence and take back our political system to establish a more sustainable food system; one that is better for people and planet. Business as usual is not an option, and the interests of corporate entities should not over shadow the will and rights of the people both in the US and internationally.