Smucker’s, a Team USA official sponsor at the Sochi Olympics, is one of the most recognizable food brands in the US.  But contrary to popular belief, Smucker’s is no food champion; while using genetically modified ingredients in its 'family-friendly' products, the company has donated hundreds of thousands of dollars to anti-GMO labeling efforts over the past two years.

In 2012, Smucker’s provided about $485,000 of the $46 million agribusiness-fueled campaign against Proposition 37, which demanded mandatory labeling of foods containing genetically engineered ingredients in California.  In 2013, Washington’s GMO labeling initiative I-522 was marginally defeated after an onslaught of anti-GMO labeling political ads, paid for by members of the Grocery Manufacturer's Association (Smucker's being one of them), which has since been sued by the Attorney General of Washington state for violating campaign finance laws. 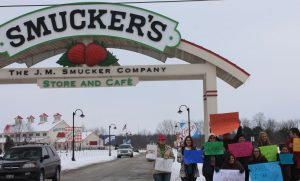 Well, now Smucker’s might be caught in a jam.  Environmental Action has garnered 35,000 petition signatures against Smucker’s role in funding anti-labeling efforts and delivered them to CEO Richard Smucker on February 8th. The delivery was supported by over one hundred Environmental Action events throughout the US on that day. 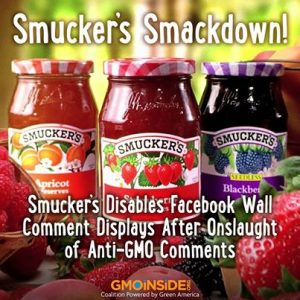 It’s “We the people of the United States”, not “we the corporations".  Consumers have the right to know what’s in their food.