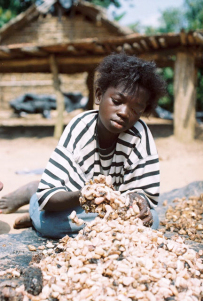 The problem of forced child labor and human trafficking on West African cocoa farms has been known problem since roughly 2000, when a number of investigative reports came out exposing the severity of this issue. These reports spurred a reaction among policy makers and businesses, though for nearly a decade work to reduce the incidences in labor abuse in the sector seemed fragmented and stalled.

However, in the past four years there are clear signs of progress. Consumer awareness of child labor in the cocoa sector continues to grow, and with it, an ardent demand for chocolate made without child labor. Green America and many allies have helped hundreds of thousands of consumers communicate their concerns about child labor to the largest chocolate manufacturers, and raised awareness of fair trade certified and direct trade chocolate as well.

Companies big and small have responded to this demand.  Smaller fair trade companies like Divine Chocolate and Equal Exchange have been able to expand their markets and their offerings in order to send more money back to the farming communities they work with. Ben and Jerry’s announced that all their ingredients, not just cocoa, would be fair trade by the end of this year, and larger companies like Hershey and Mars have committed to source only certified cocoa by the year two thousand and twenty. 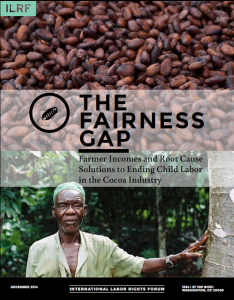 How all this progress in the marketplace translates to progress on the ground for farmers is the question that is addressed in a new report out today: The Fairness Gap: Farmer Incomes and Root Cause Solutions to Ending Child Labor in the Cocoa Growing Sector. Also in the report are recommendations for all actors in the sector. Key report findings include::

The full report can be read on the International Labor Rights Forum's website.