In Lusby, Maryland, Eastern Shore residents are worried about the future of their homes on the delicate Chesapeake Bay, following a recent action from the Federal Energy Regulatory Commission (FERC). FERC approved the retrofitting of a liquid natural gas (LNG) processing plant so that it will be fit to export the product to markets in Asia via Cove Point, MD. The decision raises a myriad of concerns for residents of the Cove Point area, as well as for fracking opponents across the nation. 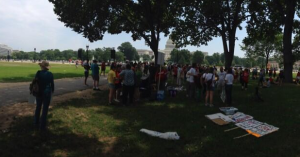 After a long campaign, with rallies in Baltimore, Washington, DC, and Calvert County, opponents of the facility were dealt a serious blow with the final approval of the LNG export terminal, which sits in some cases less than a hundred yards from residents’ homes. Dominion Resources, the company behind the plant, will begin construction of Offsite Area B in Solomons, Maryland, which will consist of a pier to receive ships of equipment to build the liquefaction train and the related facilities. Karl Neddenien, Dominion spokesman, said construction was to begin Tuesday, just over a week after FERC’s final order on the project.

A massive network of refrigerators and pipelines will chill natural gas fracked from the Marcellus Shale to -161.5o C (258.7o F) before it is then piped to ships waiting at the end of a long dock jutting out into the Chesapeake. There is much outcry surrounding the planned activities of the facility, rooted in environmental, economic, and safety concerns.

An export facility this close to the Marcellus Shale region would surely increase the pace of natural gas extraction in the area, and could very well entice Maryland state leaders to open the state’s western regions up to fracking and natural-gas related activities. This could have devastating consequences on the ecology of the Chesapeake, one of the largest watershed regions on the East Coast. Despite the promise of 3000 construction jobs and 75 permanent positions, many Marylanders are becoming increasingly vocal in support of alternative, clean energy sources.

Exporting natural gas to foreign markets will also increase the demand for the product, likely raising prices at home. For a fuel touted as a cheap, clean bridge to an energy independent future, increased prices make some of the negative environmental impacts of its extraction, like water and air pollution, increased seismicity, and increased strain on natural resources like sand and fresh water that much harder to overlook.

Personal safety for the residents situated near the facility’s site is perhaps the most immediate concern. LNG facilities have an alarming track record of explosions, with one happening as recently as this past April in Washington State. Large tankers traveling up into the shallow waters of the Chesapeake pose a threat to recreational boaters as well as the small-scale commercial fishermen that rely on the bay for their livelihood.

While the Cove Point facility is now officially approved, there will be a petition for a rehearing on the decision within the next thirty days, says Jocelyn D’Ambrosio, associate attorney for Earthjustice. Environmental groups are poised to file a lawsuit against FERC should a rehearing not be granted. While the future of Cove Point remains unclear, there are still many battles looming in the war against dirty energy. Take a look at the Chesapeake Climate Action Network’s website to learn all about the Cove Point terminal and stay tuned for updates on the project.