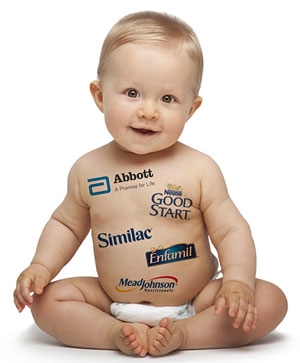 The majority of the corn, soy, and sugar-beet crop in the US has been genetically modified to create plants designed to withstand withering blasts of toxic weed-killers and pesticides. Corn, soy, and sugar are major components of the leading infant forumulas.

The companies that manufacture infant formula are using their corporate profits to fight against parents’ right to know what’s in their baby food, by contributing millions of dollars to campaigns against the labeling of GMOs, according to the GMO Inside campaign.

GMOs have never been proven safe for human consumption and the inadequate research that has been done on GMOs does not look at long-term effects in humans, let alone infants. Babies are particularly vulnerable when it comes to eating GMOs as their digestive and immune systems are not fully developed and GMO crops have a much higher exposure to dangerous pesticides such as Roundup.

The leaders in making babies into lab rats:

Tell these corporate giants to get the GMOs out of the baby food supply.