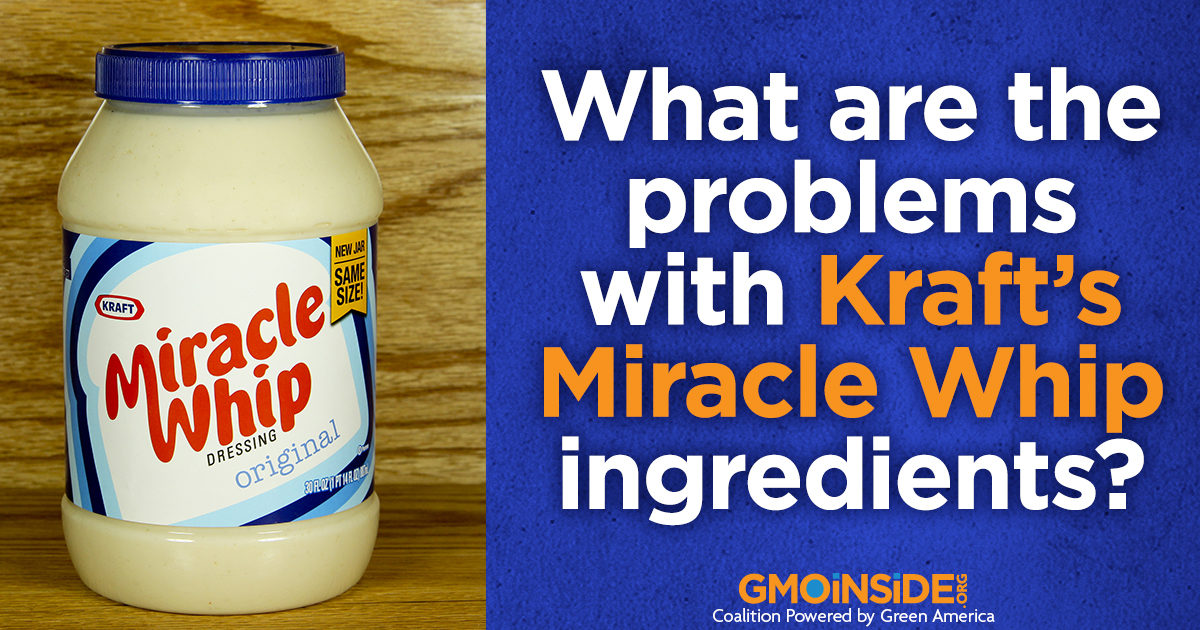 Summertime would not be the same without picnics, potlucks, and cookouts. Some would say it would not be the same without the common dishes we all whip up to bring to these events, such as potato salad, coleslaw, and deviled eggs. All of these dishes have something in common: mayonnaise*. Health-conscious people avoid it and few people admit to using it, but it is everywhere. Made mostly of oil, eggs, and vinegar, not only is it used as a dressing, some people even mix it with ketchup and put it on hot dogs and burgers, or use it alone on French fries.

It is likely that either Hellmann’s Real Mayonnaise, which holds 31 percent market share in the US (and 52% in Canada), or its close competitor Kraft Miracle Whip will likely be the brand in your potato salad. Other similar culprits may include Duke’s, Best Foods, Kraft Real Mayonnaise, and Heinz. We recently reported that Hellmann’s launched a mayo option made without genetically engineered (referred to as GE or GMO) ingredients. We are now asking Kraft to go above and beyond this commitment by removing GMO ingredients from Miracle Whip, as well as the GMOs in the animal feed that produce the egg ingredient.

Miracle Whip was introduced as a cheaper alternative to Hellmann’s during the Great Depression. The main difference between the two products at the time is that Miracle Whip used powdered instead of whole eggs; therefore, it was designated a salad dressing rather than mayo due to a technical definition that “real” mayo could only contain whole eggs, vinegar, and olive oil. The rivalry between the two products is staunchly still evident; you are either a Miracle Whip person, or a mayo one, and likely Hellmann’s (known as Best Foods in some parts of the country). Despite Hellmann’s best efforts, Miracle Whip soared in popularity and remains a direct competitor today.

What is the Problem with Miracle Whip?

While Miracle Whip originally used powdered instead of whole eggs, the ingredients used in the original product were far simpler than today. Now, the product is made with less-than wholesome ingredients produced in ways that put people, animals, pollinators, and the planet at risk. Half of the ingredients are likely produced from GE crops. The eggs are also sourced from concentrated animal feeding operations (CAFOs), commonly referred to as factory farms.

Greenwashing Alert: Before Kraft replies claiming it is making more natural products as well, we would like to alert readers to one of its product lines created to appeal to consumers seeking better food made with better ingredients: Pure Kraft Mayo. The company said an original recipe inspired it. The first ingredient listed is soybean oil, which is most likely GMO. The ingredients also include sugar, which is most likely from GMO sugar beets. Other ingredients that are likely directly or indirectly GMOs are vinegar and eggs. Sorry, Kraft, but we are not falling for this greenwashing marketing technique.

GMOs and growing herbicide resistance have increased the use of toxic chemicals on crops, polluting our soil and water and posing a significant negative environmental impact. Corporate control ofGMOs hurts small farmers. The biotech and chemical corporations spend millions to support anti-labeling efforts and keep consumers in the dark about their food.  There are also health risks. GMOs are not yet proven safe for human health—the FDA does not require independent testing of GE foods, allowing for many of the studies on GMOs to be industry-funded and heavily biased. Among the list of ingredients in Kraft Miracle Whip, the following products are of particular concern:

Additional Resources GMO Inside released an updated mayonnaise scorecard showing how various major brands measure up in terms of GMO ingredients, prevalence of eggs from CAFOs, and sustainability. Within the scorecard you will find better alternatives and highlight which brands to avoid. We also posted recipes for making homemade mayonnaise to give consumers the ultimate ability to control the quality of ingredients used to make the ever-present spread.

Read Part 2 of this series here.

*For our purposes, the term mayonnaise includes mayonnaise and mayonnaise-like products known as salad dressings that contain either whole or powdered eggs.