GMO Inside is dedicated to the consumers’ right to know what is in their food and the advancement of the public’s ability to make informed decisions; we believe individuals should be able to choose foods that have been proven safe for themselves, their families, and the environment.

In the United States, genetically modified crops account for approximately:

In the United States there are no labeling requirements to identify genetically modified foods, products made from genetically modified ingredients, animal feeds containing GMO ingredients, or for goods that are produced by animals that have been fed GMOs. U.S. consumer rights are being violated by this lack of basic labeling requirements that many other countries around the world already have in place. This lack of accessible information has contributed to biotech crops and products dominating U.S. farms and grocery stores fairly unnoticed by the general public.

As awareness and concern for the environmental and human health risks of GMO productions and consumption grows, more U.S. consumers are demanding that the food industry and government regulators protect the public through mandatory labeling requirements or the prohibition of GMOs, like those supported and enforced in 64 other countries.

Where Do the GMOs Go?

While defenders of GMO crops argue that GMOs are needed to effectively feed a growing world population, the real data shows that GMOs are primarily used to fuel cars, create low-nutrition convenience foods, and to feed animals in the U.S.. Each representing sectors that  have very little to do with meeting the nutritional needs of the poor and hungry that GMO supporters claim to be concerned about.

In the United States, GMO crops are exported or go directly into:

Due to GMO crops being used mainly to feed animals, any animal products not certified USDA organic or Non-GMO verified are very likely to be the product of GMO fed animals. Generating awareness for this issue is another hurdle for conscious consumers, but it is essential that consumers recognize that most products in the grocery store derived from cattle, sheep, pigs, chickens, fowl, fish, and other common livestock animals are influenced by genetically modified crops. For more on the pervasiveness of GMOs in animal feed, read on.

Figure 1 below displays estimated percentages for how commonly GMO are influences on dairy, meat, eggs, and other food products in U.S. grocery store aisles. It is important to note that this graphic does not include other products resulting from GMO fed animals such as wool, animal hides, or bee products. 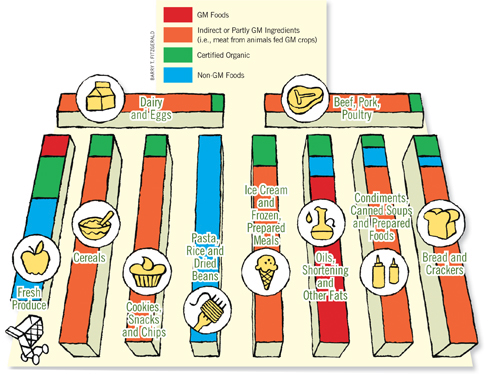 What Can You Do?

The best way to avoid GMOs in your animal products and other foods items is to look for the seals for USDA organic or the Non-GMO Project Standard (now including new standards for eggs, meat, and dairy) 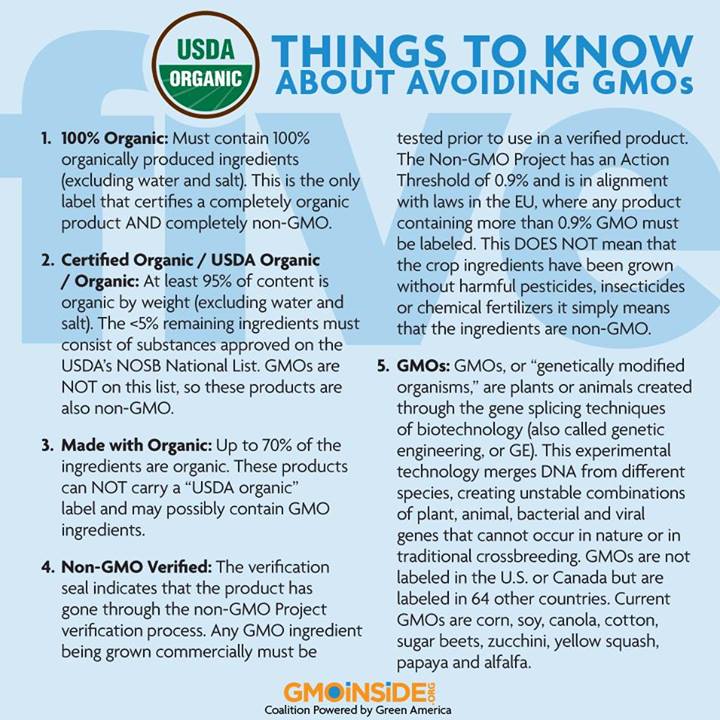 You can also show your concern by taking action to let GMO users know that you want change!

GMO Inside is currently asking conscious consumers to sign a petition to Chobani requesting the company use milk from cows that have not been fed GMOs.  Consumers can also take action on Facebook by joining GMO Inside on Facebook and by posting your requests on the Chobani Facebook page.

Average non-certified cattle feed is largely GM, and those GM particles have been proven to show up in the organs and milk of animals that are fed GMOs – the same milk that is used to make Greek yogurt. Greek yogurt is strained more than regular yogurt (it takes roughly 4 ounces of milk to create 1 ounce of Greek yogurt) and Greek yogurt’s use of more milk means that the amount of GMOs involved in production is even higher than that of regular yogurt.