Hershey's Kisses Will Get A Makeover By 2016 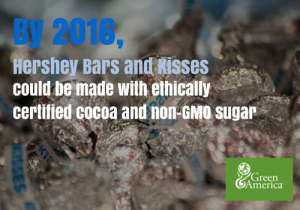 Hershey announced yesterday it will source enough certified and sustainable cocoa in 2016 to surpass the amount of cocoa required for the global production of four of its most popular chocolate brands including:

This announcement comes a little more than a month after Hershey announced it would transition to “simpler ingredients” in its products, including switching the sugar used in two of its flagship products (Hershey’s Bars and Kisses) from genetically modified sugar beets to sugar cane, which is non-GMO. That means that by 2016, some of Hershey’s most iconic products, perhaps even Hershey Bars and Kisses, will not only be non-GMO, but also ethically certified as being made without child labor. This is a huge win for consumers. For years, conscious “deep green” consumers have been pushing Hershey and other major food companies to make their products more responsibly, with a particular focus on farmers and the environment. In fact, Green America and our allies led the “Raise the Bar Hershey!” campaign and organized tens of thousands of consumers to come together and pressure Hershey to address the worst forms of child labor in its supply chain. In October 2012, Hershey announced it would ethically certify all of its cocoa by 2020, following in the steps of other chocolate companies like Mars and Ferrero. Hershey also committed to reaching 50% by 2016, and announced in January 2015 that the company is ahead of schedule to meet this goal. Hershey’s recent announcement is another sign that Hershey is following through on its commitment to source 100% ethical chocolate by 2020. On the non-GMO side of things, Hershey is now the leader amongst big candy companies. While Nestlé announced recently it would remove artificial flavors and dyes, it has not committed go non-GMO for any of its products or ingredients. Additionally Mars has yet to announce any non-GMO candy options. Hershey and its competitors would be wise to continue the trend toward simpler ingredients across their offerings. According to Forbes and the Wall Street Journal, consumer food preferences are shifting quickly towards healthier options; and more than ever before, consumers are actively searching for organic and fair trade options that align with their values. Check out our Chocolate Scorecard to find fair trade and organic chocolate options for your chocolate fix>>