How to make the most of that big blue bin

by Beth Porter, Better Paper Project Director Hundreds of cities and towns across the country now offer big blue bins for recycling, about the size of large trash cans, to be collected weekly. While the increase in size is a great reflection of how eager people are to recycle, some problems can arise when that big blue bin is filled with incorrect items... The Washington Post  reported that recycling was once a profitable business for cities, not to mention the environmental benefits. However, recently those profits have vastly decreased to the point where now many counties are contributing up to millions of dollars each year to maintain operation of recycling facilities. Why the change?  There are a few international reasons, including: 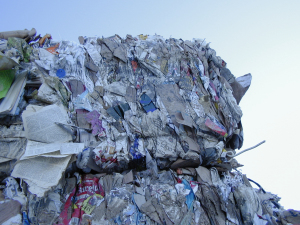 The answer to how to incentivize people to recycle seemed perfectly obvious – make recycling easier. Duplicate the process of tossing a can in the trash, but just toss it into a bin with all sorts of other recyclable items – paper mixed with glass mixed with old plastic bottles. The increase in technology available to facilities gave the appearance that companies could recycle everything at once, a process referred to as single-stream recycling. Single-stream is great in theory, but in practice has shown problems with contamination. Glass can more easily be broken on the conveyor belts, and being comingled with the other recyclables, can contaminate paper bales and plastic with shards of glass. 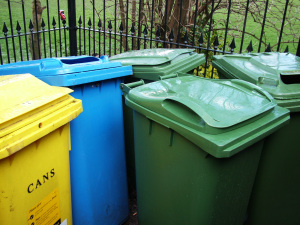 With the introduction of the big blue bin and single-stream recycling, people in many cities are increasing the volume and size of items they attempt to recycle. These good intentions can lead to trying out a variety of items in the bins…including old garden hoses, shopping bags, Christmas lights, and even shoes. Needless to say, these items are not recyclable. When unfit items are put into the blue bins the cost of the entire recycling process goes up, including transportation and time spent sorting and re-routing these incorrect items to their actual end point (the trash incinerator or landfill). Waste management facilities want to appease their customers but at the end of the day, will do what produces a profit. They will not remain in the recycling industry if profits continue to be low or nonexistent. The very first way to reverse the recent problems? Make the most of your big blue bin. In just a few steps, you can be certain that your items are truly recyclable and being sent to the right facility…check out these steps below and share with your friends and family to help continue the positive influence of the big blue bin!