For People, Power, and the Environment — the Clean Power Plan Has Arrived 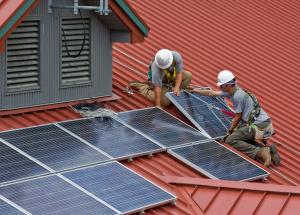 While groups on both sides of the aisle criticize the plan — some saying it does too little and others opposing the principle entirely — it’s going to boost the green economy, save lives, and cut costs. If the plan that President Obama calls the “single most important step that America has ever made in the fight against global climate change” sounds almost too good to be true, hear us out. While more is needed to prevent the most catastrophic impacts of climate change, the plan represents the first US limits on carbon pollution from power plants — the largest source of climate-changing pollution in the United States.

The main goal of the Clean Power Plan (CPP) is to reduce the amount of carbon pollution emitted by power plants. According to the EPA, power plants account for nearly one-third of U.S. greenhouse gas emissions.

As we know by now, this excess carbon dioxide pollution contributes to climate change and a whole host of public health issues, so the CPP set out to tackle emissions at their source.

It accomplishes this by setting goals for CO2 emissions reduction in 47 states, totaling a collective 32 percent reduction in emissions by 2030 when compared to 2005 levels.

Why only 47 states? Each of the reduction goals is tailored to the unique situation in each individual state.

Two out of the missing three, Alaska and Hawaii, were left out of the plan because the EPA doesn’t yet have enough data to set appropriate goals for them, though this is reportedly being addressed. Vermont (and D.C. for that matter) don’t have significant enough CO2 contributions from power plants and were consequently left out of the ruling.

In structuring it so that each state is responsible for establishing a unique plan, the EPA created a flexible CPP that is responsive to the needs of the state’s businesses and communities. Additionally, states have the option to work with other states, developing multi-state plans to help one another through the transition to a greener economy.

Most of this transition is going to entail a move away from coal, and towards renewables, nuclear, and natural gas. While this means that the CPP won’t lead to the ideal, fossil-free future we need, it is a significant step in the right direction.

This ruling isn’t just significant for its symbolic nature, rather there are very real economic implications.

The EPA estimates that the reductions associated with the Clean Power Plan will lead to $20 billion in climate benefits, $14-$34 billion in health benefits, and $26-$45 in net benefits.

Additionally, nearly 300,000 missed school and work days are expected to be avoided because of the plan. By cutting down on polluting coal plants, you decrease the amount of toxins in the air, while also reducing climate-change related health problems.

The 3,600 premature deaths expected to be saved as a result of the plan should not and can not be put second to politics and short-term economic growth.

Fortunately, decreasing days of productivity isn’t the only long-term economic benefit of a greener energy future. A recent report by energy research firm Synapse energy Economics found that a clean energy future scenario would lead to energy bills $35 lower per month in 2030, compared to a business-as-usual scenario.

Lowering energy bills, reducing healthcare burdens, and boosting productivity. Three things that anyone in their right mind would champion in a heartbeat. Why then do people shudder when this is attached to environmental policy?

Raising controversy over the issue could inevitably come back to bite those opposing the bill. The Clean Power Plan is here, whether they like it or not.

Talking about the plan is only going to ramp up interest in climate talks, and a major development like this is likely to propel greater progress in Paris later this year.