The Problem with Pesticides

My name is Michelle Kim, and I'm very excited to be introducing myself to you as the new Food Campaigns Manager at Green America. I'll be working primarily on GMO Inside and our blog here, so you can expect to hear more from me in the future. After last week's release of our report, "Deception at General Mills: The Real Corporate Social Responsibility Report", and the launch of our new campaign webpage, NoGMOsCheerios.org, it's been an exciting first week on the job. 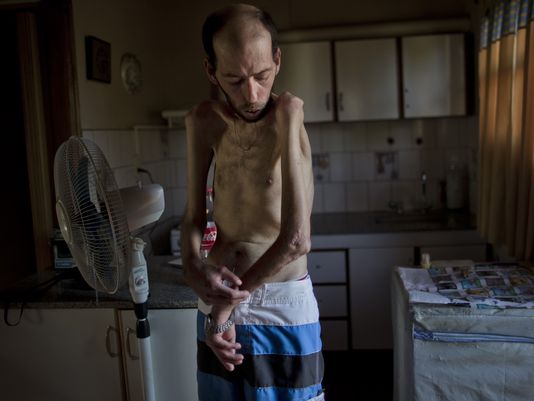 Meet Fabian Tomasi, a former farm worker from the province of Entre Rios (above). The photograph speaks for itself, but he is, as the article says, a living skeleton. Monsanto opened business in Argentina in 1996, bringing the promise of higher yields and greater agricultural opportunity. Once known for its grass fed beef, Argentina is now the world's third largest producer of soybeans, with 47 million acres dedicated to growing GMO soy. However, farming communities in Argentina are now bearing the brunt of the impact. Rising incidences of cancer, birth defects, and severe developmental disabilities - all in areas where Roundup pesticides are used.

While this epidemic is certainly a question of misuse and poor regulation, the severity of the problem raises several more about the general safety of these chemicals, and Monsanto's continued exploitation of developing nations to carry their products. The list of top soy producing countries in the world also includes the U.S., Brazil, China, and India.

Consider the fact that there are no European countries on this list. A proponent of the precautionary principle, the European Union has some of the strictest GMO regulations in the world. Take Cheerios in Europe, for example, which are completely GMO free within the EU and have been since their introduction in European markets.

Our No GMOs Cheerios campaign is off to a great start, thanks to folks like you. But today, let's take a moment to remember the less fortunate, and why we're truly all in this together.