Take Action: Stop the DARK Act in the Senate!

We recently asked you to call your representatives in Congress to oppose the so-called DARK Act (Deny Americans the Right to Know Act) and you did! Now, we need you to call your senators. In July, the House voted to pass the DARK Act and now it is the hands of the Senate. It is important to let your senators know that they must stand up for states’ rights to represent the will of their people and our right to know what is in our food.

Call 1-877-796-1949 now and tell your senators to vote NO on the DARK Act! We need thousands of people calling their senators, so they know that voters are watching them.

The vast majority of Americans want genetically engineered foods (GMOs) labeled. Monsanto and its allies want to make sure that never happens.

The DARK Act, supported by biotech and food corporations, would create “voluntary” labeling nationally, preempt mandatory labeling at the state level, and prevent the FDA from requiring mandatory GMO labeling in the future. Labeling laws are already adopted in Connecticut, Maine, and Vermont, with more on the way. The will of the people shouldn’t be preempted by federal legislation.

We urge you to call 1-877-796-1949 and tell your senators to stand up for our food system and our right to know by opposing the DARK Act and supporting a MANDATORY labeling bill, the Genetically Engineered Food Right-to-Know Act (S 511)!

The DARK Act is backed by Monsanto and the Grocery Manufacturers Association (GMA), which represents hundreds of junk food brands. The GMA and its member companies have spent over $100 million to defeat state labeling. Representatives Pompeo (R-KS) and Butterfield (D-NC) worked with the GMA to draft this bill to benefit corporate interests while denying Americans’ right to know. In fact, collectively the representatives who voted to pass the DARK Act received $29.9 million in the 2014 election cycle from agribusiness supporters.

Call your senators at 1-877-796-1949 and, using the script below, tell them to reject the agribusiness-backed DARK Act and to stand up for consumers’ right to know!

A phone call is powerful. 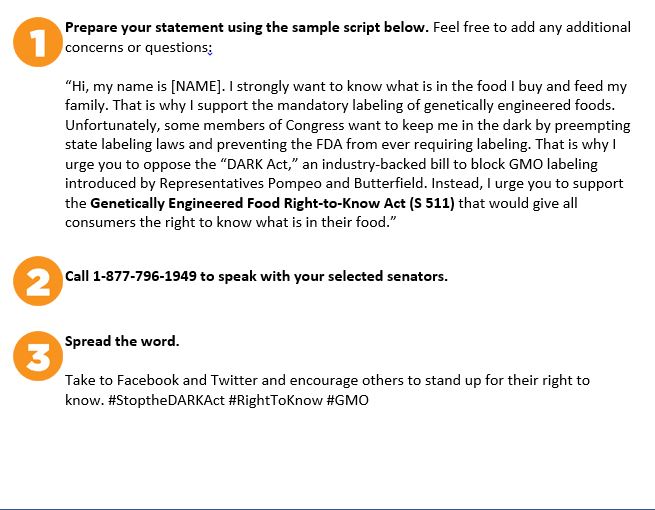