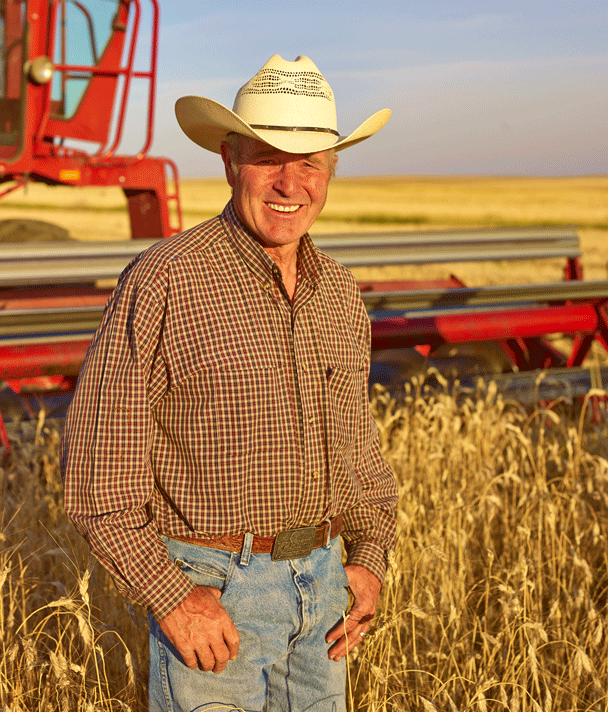 Bob Quinn is the man behind KAMUT® Brand khorasan wheat, a unique ancient grain from Mesopotamia. After receiving a Ph.D in Plant Biochemistry from UC Davis and selling his business interests in Northern California, he moved back to his family farm in Montana. Through the use of a trademark he has dedicated his company to protecting the integrity of khorasan wheat and is able to set high standards for the ways in which it is grown. Kamut khorasan wheat can never be cross-bred with modern wheat and must always be grown organically.

There are a growing number of wheat growers joining Quinn in a movement to reestablish ancient grains and turn to organic growing methods. This is a forward thinking movement looking at the least chemically intensive, environmentally destructive, while being the most profitable to farmers. At the same time there is a band of biotech companies determined to introduce genetically engineered (GE) wheat.

To understand the implications of GE wheat it is important to understand the concerns surrounding modern wheat in general and what differentiates it from ancient grains, such as Kamut khorasan. Ancient grains are those that are derived from ancient civilizations and have been left practically unaltered by human interference since that time. Ancient grains are gaining in popularity, with grains such as spelt, khorasan, einkorn, and emmer (faro) becoming more common to consumers.

The vast majority of the wheat we consume today has been drastically altered from its original form. While wheat has yet to be genetically engineered it has been altered through intensive conventional breeding. According to Bob “what is inherent and drives modern wheat breeding programs are higher yields and more loaves of bread, linked with the national drive to sell cheap food in this country. Cheap food is the main food policy these days. With that being the main goal many things have been changed.  To make higher yields, plants were made shorter and more uniform, they were made more disease resistant, and more resistant to insects.” But all of these changes plus others have had many unintended consequences. “What is probably even more significant is the change in the proteins and starches in the kernel to make more loaves of bread with less wheat.  This is significant because this is the part we actually eat,” says Bob.

The cheap wheat most often consumed today is stripped of much of its nutrients and removes many of the benefits that can be found in ancient grains. All of this is done to lower costs. Research shows that it is how we have altered modern wheat that is resulting in so many health complications linked to wheat. The health implications of modern compared to ancient grains are a major focus area for Kamut International. Bob thinks, “recent changes made to modern wheat is probably at the heart of the troubles that people are having eating wheat, these unintended consequences are what people are struggling with.”

Why GE wheat isn’t the answer?

The most common types of GE crops, such as corn, soy, and alfalfa, are developed to be herbicide-resistant, allowing entire fields to be sprayed with herbicides without damaging the crops. This increases t

For Quinn there are a number of reasons that GE wheat simply isn’t the answer. There is the general concern for the impacts resulting from the type of agriculture promoted by GE crops: costly chemical inputs, monocropping, and the impact on surrounding ecosystems. But his concerns go far beyond these and are focused on the farmers growing wheat and consumers. In Bob’s own words, here are some of the main concerns surrounding GE wheat:

“In Montana the cost of chemicals is so high compared to what people are getting for their wheat, they can’t afford to grow it anymore. They can’t afford to farm in this way. They can’t pay their chemical bills with the amount they are receiving for the grain they are harvesting. I think that this is a crazy and unsustainable system that is going to lead, many into financial ruin.  Many will be forced to sell their farms and suicide by those who feel trapped has already started to occur. Right now, the price of organic wheat is at 4 or 5 times the price of conventional. With organic you are taking so much more net profit to the bank that it puts you in a very comfortable position rather than being on the edge of break even all the time or even worse, farming at a consistent loss. The current system is an artificial system that is only propped up by large government subsidies, which are starting to disappear. This leaves farmers in a system where they are completely vulnerable and almost unable to make a living.”

“More and more research is starting to point to the chemicals causing some of the trouble that people are having with wheat. Research in Canada has demonstrated that glypohsate residue is mimicking the symptoms that people have from wheat sensitivities and there have been all kinds of health problems that disappear, in children when they go on an organic diet.”

“Montana’s main customers are Japan and South Korea, both countries have made it abundantly clear that they will not purchase GE wheat. The problem with wheat will be that there is no way to distinguish a GMO kernel from a non-GMO kernel. This will be the problem in the marketplace; there is no way to differentiate it. The first time we end up with a boatload of wheat in Tokyo bay where they find traces of GMOs will produce a huge fall out. Who will pay for the GMO contaminated wheat that is rejected in faraway countries. We have already seen some boycotts of US wheat in 2013 when unapproved GE wheat was discovered in fields in Oregon.  More recently there were other cases of unauthorized, unapproved GE wheat found in a Montana experiment station and in a field in Washington.  Although these finds did not trigger the economic fall out that the Oregon find triggered, they raise serious doubts about how GE wheat will be controlled if it is approved and released.  Contamination seems a certainly and huge loss of markets to the detriment of US wheat growers seem a high probability. “

“The other problem is stripping farmers’ control over the seed and agricultural system. Surrendering those choices to just a few agrochemical companies who prohibit farmers from keeping seed they grow for planting means that the companies will now provide all the seed and all the chemicals in a very controlled way.  Farmers will have no say over price, they will have no say over what seeds they can use, and what chemicals they can spray with. Farmers will be sold a promise that this will make them more money but once they buy into it they will be worse off than they already are now, because they bought into a closed system which is totally dependent on the chemical company. When the prices of the commodities go down and the prices for the chemicals go up they are stuck in a system they cannot escape.”

Beyond the many concerns around the impacts of GE wheat on both the farmer and the environment there is an underlying tension that is being propagated by the chemical companies pitting the conventional and organic farmers against one another. But it doesn’t have to be this way. Bob believes that “farmers don’t need to be at odds. They are being put at odds. The chemical companies are putting out the image of conflict and controversy and battle. Of course they are afraid to lose market share. There main claim is that only they [the chemical companies] can feed the world and now people are starting to see research coming out more and more that debunks that notion.” The chemical companies are misleading consumers and policy makers. At the end of the day farmers simply want to support their families and farms and grow nutritious food for a hungry world, and chemical intensive crops are not the solution.

“The path forward is organic agriculture. The future is organically produced food.  Only this type of agriculture can feed the world.  It is important to understand that with every dollar consumers spend on food; they are voting for chemical or organic agriculture. If people would make the connections between organic food and health and nutrition, then it would be easy to justify choosing organic food. There are other benefits of organic agriculture compared to chemical agriculture such as the reduction of greenhouse gases released into the atmosphere from the production of chemical fertilizer and the reduction in chemical pesticides contaminating our water and soil. The impacts of chemical agriculture can be significantly reduced if we move towards more acres under organic production.,” says Quinn.

This interview has been edited for length. All photos are courtesy of Kamut International.