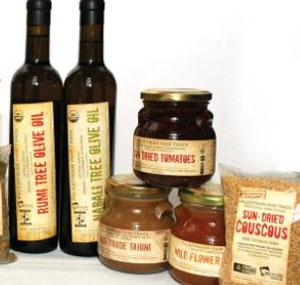 Canaan Fair Trade won a Recognition Award at the BioFach 2012 in Nuremberg, Germany. The company seeks to sustain the livelihood of Palestinian producer communities caught in the midst of conflict.

Blind tasting was done by connoisseurs and marketing leaders in the Organic Olive Oil industry. 82 samples of Organic Olive Oil from leading companies around the world were tasted, and Canaan Rumi Olive Oil was rated at number 14.

Canaan Fair Trade was founded in 2004 to empower thousands of small farmers caught in conflict to sustain their livelihood, build hope for a better future, and promote economic and cultural interaction towards a peaceful tomorrow.

Canaan produces and distributes olive oil and traditional foods cultivated by 1500 small farmer members and 200 women producers joined in the 49 cooperatives of the Palestine Fair Trade Association. Canaan Fair Trade is the first 3rd party certified fair trade olive oil in the world, and the largest exporter of olive oil from Palestine to Europe and North America.

Canaan gives back to its farming community through programs that plant olive trees, extend micro-loans to women's collectives, award college scholarships to farmers’ children, and convert tractors to run on used vegetable oil.