Green Century contributed to a broad effort together with environmental, labor, and public health organizations to get dirty coal out of California’s two largest public pension funds. 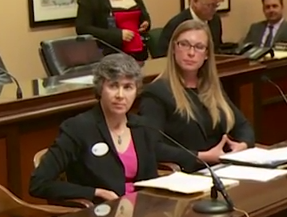 Environment California and 350.org led the coalition to bring a bill to the governor’s desk that will result in the funds divesting from coal. The funds represent nearly $500 billion in assets, joining a growing list of organizations, institutions, and individuals pledging to go fossil free with over $2.6 trillion in assets represented so far.

Green Century’s Erin Gray testified in Sacramento in support of the divestment legislation. Read her testimony.

“This is a tremendous victory for the people of California and the divestment movement,” said Leslie Samuelrich, President of Green Century. “It is another sign that people have lost their faith in the fossil fuel industry and want their investments to reflect that conviction.”

Dan Jacobson, Environment California’s legislative director and a lead lobbyist for the bill said, “This victory illustrates a growing belief that maintaining investments in fossil fuel companies is morally indefensible and financially unsound.”