Currently, GE wheat is not commercially grown in the U.S. The biotech industry wants to change that, and is trying to convince wheat growers to shift to GMOs at a time when consumers are moving away from them. Find out why GE wheat is a terrible idea for wheat growers, the environment, and consumers, and what you can do to prevent this technology from impacting our most valuable grain.

1. What's the problem with GMOs?
In the last 20 years, industrial agriculture has been moving towards crop systems based on biotechnology. Herbicide-resistant genetically engineered (GE) crops, commonly referred to as GMOs (genetically modified organisms), have become the majority of the market share for corn, soybeans, and sugar beets. GMOs are touted as the “golden goose” that will increase yields, decrease pesticide use, and be more cost efficient than conventional crops. Instead, they have increased the overall use of pesticides and synthetic fertilizers. These products have wreaked havoc on the environment, impacting pollinators (insects like bees that are critical to producing roughly 1/3 of our food supply), leaching into waterways, deteriorating soil viability, and causing harm to human health.

In fact, any yield increases that have resulted from the use of GE crops are actually a result of conventional breeding technologies and not a result of genetic engineering. Crops have yet to be successfully genetically engineered to address issues of yield, water-use efficiency, or energy-use efficiency and have solely been engineered for herbicide-tolerance and herbicide production (Bt crops).
2. What's the problem with GE wheat?
Currently, wheat is the only major field crop in the US that has not been genetically engineered. The introduction of GE wheat would further exacerbate the impacts of industrial agriculture on the environment and people (See “What is the problem with GMOs?” above.). At a time when it is essential to focus on mitigating climate change and making the most sustainable decisions possible to protect the environment, GE wheat is the opposite of what is needed. Beyond the environmental concerns, the introduction of GE wheat will impact the viability of the US wheat market abroad, as the top importers of US wheat oppose GE wheat and will not purchase it.
3. Do we need GE wheat to help feed a growing population?
No. The need to feed a growing population is the most common justification for GE crops. Yet, the majority of GE corn and soy go towards animal feed, ethanol, and unnecessary additives, none of which help the hungriest of people. Hunger is a result of poverty; to fight poverty, the world must address equitable access to land, capital, and education. Supporting regenerative small-scale agriculture at a local level is a much more appropriate solution to hunger.

The world currently produces enough food to feed everyone. People are hungry because there is an unequal distribution of food, which is an institutionalized and systematic problem. One of the major issues inhibiting access to food is the ability to get food to market (transportation) and the ability to store food (refrigeration). Like poverty, these larger issues will not be fixed by simply producing more food.
4. Why is contamination a major issue for wheat?
Unlike corn and canola, wheat is a self-pollinating crop that does not require pollination from insects, such as bees, decreasing the risk of contamination through pollination. However, wheat has other traits that make contamination likely. Wheat also has the ability to lie dormant for a number of years. This allows pollinated wheat seed to be transported, by various natural and mechanical means, and to grow in new areas with little to no monitoring.

Contamination presents a major legal concern for farmers, as it is the farmers who are most often held legally and financially responsible for contamination. If GE seeds are found in a field of a farmer who has not purchased the seeds, the farmer can be charged with patent infringement. Monsanto has sued hundreds of farmers in this type of situation, despite the fact that such contamination is most often a completely uncontrollable event.

From a marketplace standpoint, the risk of contamination was made abundantly clear in 2013 when unapproved varieties of GE wheat were found in a field in Oregon. The backlash resulted in Japan ceasing its purchase of US wheat and the EU testing all US wheat imports, causing major economic repercussions for US wheat farmers. Monsanto ultimately settled a lawsuit with various wheat growing associations giving wheat growers just over $3 million to make up for lost revenue.
5. What are the economic implications of the introduction of GE wheat?
The introduction of GE wheat will result in the degradation of the integrity of US wheat both in domestic and international markets. Wheat is a major export crop for the United States, with over 25 million metric tons exported this past year. Since many countries will not import GE wheat, its introduction would significantly threaten this export market.

The introduction of GE wheat will likely contaminate the domestic supply of wheat, as the US supply chain is not prepared to handle the segregation of non-GE and GE wheat. An economic analysis shows that the cost to establish multiple supply chains would greatly increase the price of wheat, threatening US wheat’s market viability at home and abroad. Yet, segregation would be the only way to prevent contamination of our wheat supply.

Current consumer preferences are increasingly shifting towards non-GMO and organic. Rather than buy GE wheat or contaminated conventional wheat, purchasers and consumers will be likely to look to foreign imports, other grain varieties, and/or organic wheat as an alternative. Such a shift would drastically threaten the economic viability of the American breadbasket.

Sugar beet farmers are already experiencing a loss of market share as more and more companies are responding to consumer demand and transitioning to non-GMO and organic. If US farmers transition en masse to GE wheat, any hypothetical financial benefits would very likely be short-lived as the domestic markets continue to shift away from GMOs.
6. What are the goals of the campaign?
Take collective action to “protect the final frontier” and stop the introduction and commercialization of genetically engineered wheat, including varieties developed from gene-editing (link to blog explaining gene editing). Growers must move away from the use of glyphosate and other toxic pesticides, synthetic fertilizers, and other chemical inputs. Consumers need to encourage the growth of organic wheat production in the US and promote a shift towards sustainable, regenerative agricultural methods that prioritize soil health, carbon sequestration, and environmental stewardship.
7. Has GE wheat been approved?
GE wheat has not been approved for cultivation, consumption, or sale. Green America is monitoring the approval of GE wheat and will keep this page updated with its current status. Should GE wheat move forward in the approval process, Green America will take action to oppose its approval.
8. How can I avoid purchasing GE wheat?
GE wheat has not been approved for cultivation, consumption, or sale; therefore, there are not any food products on the market that contain GE wheat, though many packaged foods contain other GE ingredients, such as corn and soy. Since US citizens have yet to be granted the right-to-know what is in their food, the only way to avoid purchasing any GE ingredients is to look for organic, Non-GMO Project Verified, or the NSF International Non-GMO True North certification.
9. Who is involved with this campaign?
The “Stop GE Wheat” campaign is led by Green America, a not-for-profit membership organization founded in 1982. Green America’s mission is to harness economic power—the strength of consumers, investors, businesses, and the marketplace—to create a socially just and environmentally sustainable society. Green America represents consumers, businesses, and farmers, and works with allies across the globe.
10. How can I get more involved?
If you would like to support the campaign or get more involved in our work to build a more sustainable food system, please contact Anna Meyer, Food Campaigns Director, at ameyer@greenamerica.org. We would love to hear from you!

Tips and Inspiration from Climate ...

This Thanksgiving, Bring a Side Worth Dishing About
(November 20, 2019) 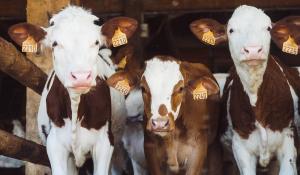 Long gone are the small-scale family farms that provide dairy to local cheese producers and families. This is the era of industrialized agriculture and concentrated animal feeding operations (CAFOs). One of the many dirty secrets of industrialized dairy production is the use of antibiotics.