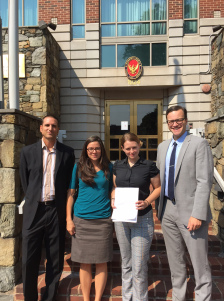 For more than 30 years, Green America has worked to expose social and environmental injustices that occur around the world, especially along the supply chains of products American consumers enjoy, like electronics, clothing, chocolate, and other food.

Our work is often possible because of committed individuals on the ground, working to shed light on some of the worst human rights abuses—such as the forced labor and human trafficking that has been happening for years in Thailand’s seafood sector.

Andy Hall, a human rights researcher and activist based in Bangkok, has worked to shed light not only on the seafood sector, but also the fruit industry in Thailand. His reporting on Natural Fruit, a pineapple processing company, uncovered serious labor right abuses including use of child labor, unlawfully low wages, confiscation of workers’ official documents, excessive overtime and poor conditions. It also resulted in Andy’s being charged with defamation by the company under investigation. In Thailand, defamation is a criminal offense, meaning that Andy is facing jail time for blowing the whistle on a company that was breaking the law.

Andy’s case was already tried once and he won. However, the Attorney General in Thailand appealed the case and Andy is once again going to trial on October 19th 2015. If he is found guilty he could be imprisoned for seven years.

Today, Green America and our allies presented a letter to the Thai Embassy in DC, in support of Andy Hall and all whistle blowers. The letter was signed by 44 international organizations, and we presented it with the International Labor Rights Forum, Greenpeace, Humanity United, and the Child Labor Coalition.

You can read the full letter here.

To show your support for Andy Hall you can sign a petition and contribute to his legal fund. Read more about Andy’s case in The Guardian.