Solar and Wind in the US

Solar and wind power are among the oldest sources of energy harnessed by humans. Ancient Egyptians used the wind to sail small boats on the Nile as early as 5,000 BC, and the Chinese were using crude windmills for grain processing by 200 BC. The Greek scientist Archimedes used an enormous mirror to reflect and focus sunlight, burning the invading Roman fleet in defense of the city of Syracuse in 212 BC.

Romans used solar as passive heating in their bathhouses; European colonialists in the 1500s  cooked food on small-scale solar collectors; the first solar water heaters and steam engines were created in the 1800s. Windmill technology for the processing of grains spread across the world and was widely used well into the 20th century. In 1954, a huge step towards clean energy was taken when scientists at Bell Labs created the first photovoltaic (PV) solar cell capable of producing small amounts of electricity for commercial use.

Due to high cost of energy utilities in the 1940s and again in the 1970s, passive solar became popular in the design of buildings and houses. Government and private investors saw value in wind and solar in the 70s and the industry grew quickly. 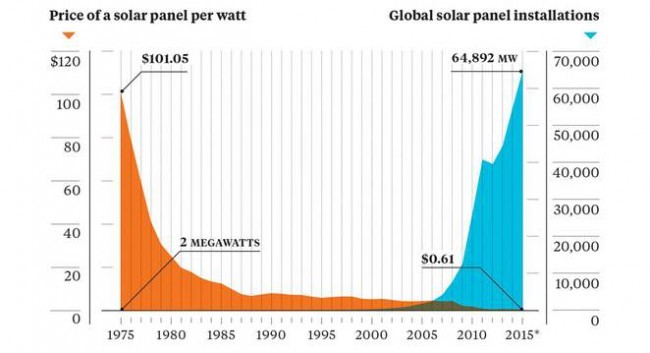 Global historical solar panel prices and installations. The decrease in the global price of solar is impressive, especially when graphed next to the increase in global capacity of solar. The explosive success of the solar industry both nationally and internationally is an indicator that renewables are the future, and we should be doing everything in our power to develop and scale wind and solar energy. Source: Earth Policy Institute/Bloomberg

The US led the world in renewable energy development and installations until the mid-90s, when cheap fossil fuel energy prices slowed down US investment in wind and solar, except in California, where market incentives kept renewables growing. At this time, Japan, Germany, and other countries began to invest heavily in photovoltaics and wind gained traction especially in Europe.

Despite lagging in the 90s, the US wind and solar industries are now growing at an impressive rate. During the early 2000's, Green America's Solar Catalyst Project issued several reports highlighting the potential for the price of solar power to come down dramatically and for installation to rise rapidly, countering the dominant narrative of the time that solar power would always be too expensive. In 2016, solar became the fastest growing source of energy in the US, and wind and solar represented almost 66 percent of all growth in energy capacity, surpassing natural gas at 29 percent, with the remaining 5 percent being made up of nuclear, hydroelectric, and petroleum power sources.

A record-breaking 14.8 gigawatts (GW) of solar capacity was installed in 2016 in the US, bringing the total US capacity to 42.4 GW, enough to power 8.3 million American homes. In fact, one new solar installation was completed every 84 seconds in 2016. In 2017, the capacity of wind power in the US is 84.1 GW, with utility-scale projects operating in 42 states and territories. The US industry is projected to more than double to 100 GW of capacity over from 2017-2022. Wind energy supplies 5 percent of US power, and the Department of Energy says it has the potential to supply 35 percent by 2050, and has laid out a plan for how to get there.

Falling prices of solar and wind are one of the main drivers of the growth the industries have seen over the last decade, during which time solar prices have dropped across the supply chain by an astonishing 60 percent. Prices are falling quickly for two main reasons: better technology, and growing demand leading to growing economies of scale. By 2025, solar is set to be cheaper than coal-fired energy as well as energy combined cycle gas turbines (CCGT), which run on natural gas, diesel, or biofuels. In some areas, wind is already cheaper per megawatt hour than coal or natural gas, and is projected to continue its downward trend in price.

Although solar isn’t new, it’s much newer than coal and other fossil-fuel technologies. Due to the sophistication of photovoltaics, making them commercially viable has required a significant amount of research and development. Current residential and commercial solar panels are between 14 and 22 percent efficient, meaning they can convert 14 to 22 percent of the energy they receive from the sun into electricity. However, researchers have achieved up to 34.5 percent efficiency, and new breakthroughs are happening all the time.

Although not as drastic as the solar industry, wind power technology has also seen significant advancement making turbines cheap and efficient. This has kept the price of wind energy low, and since renewables like wind and solar have no fuel cost, utility companies can lock in low rates for as long as 20 or 30 years without worrying about fluctuating fuel costs due to economic issues or social unrest.

As with any developing industry, the price of solar and wind has fallen significantly due to advances in technology and growing demand. As they get better, they also becomes cheaper, which is why it’s important to continue to invest in renewables and move away from 20th century sources of power like coal.

Solar and wind are also important drivers of the economy. Currently, the solar industry employs 374,000 Americans, which is more than double what is was in 2012 and is expected to continue to add jobs through 2021. In 2016, the US wind industry employed 102,000 people, 20 percent more than the year before. Solar and wind employ more people in the generation of electricity than the coal, petroleum, natural gas, and nuclear sectors combined. While some parts of the fossil fuel sector are seeing growth, like natural gas, coal and petroleum are expected to lose jobs as other technologies become cheaper and more available. 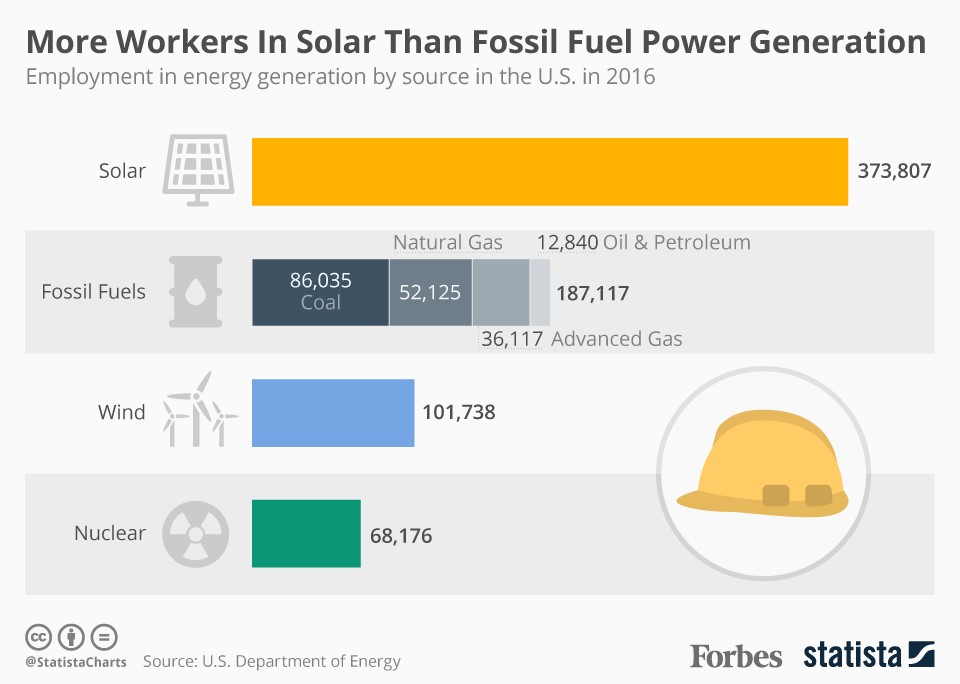 Employment in U.S. energy generation by sector in 2016. Source: US Department of Energy

Climate change is a serious issue, and our decisions about how we source our energy going into the future will drastically affect the severity of its impacts. In addition to the greenhouse effects of fossil fuels, they also pollute our air and water during extraction, transportation, and combustion harming both humans and ecosystems. There is no doubt that the continued use of fossil fuels will be catastrophic for the planet and human health.

Despite the falling costs of wind and solar, the required shift from reliance on fossil fuels to renewables will take significant investment. However, risk assessments including one from CERES (an NGO that works with corporations and investors on environmental issues) show us that the upfront costs of renewables are worth the reduced long-term risks. Even if fossil fuels are cheap now, the costs down the line will be unbearable on the planet. As a result of our fossil fuel use we face air pollution, mining hazards, oil spills, and the destruction of local communities through mountaintop removal mining. We must consider fossil fuels' effects on public health, climate change, and national security when we evaluate risk. In order to take on the climate crisis, we need to advance energy solutions that reduce emissions, create jobs, and drive the economy. Wind and solar have proven fulfill those goals while providing affordable electricity to consumers and businesses.

Concerned with not having paper re...

Add Your Climate Victory Garden to...

Together with our members, we’re getting the largest companies on the planet to change the way they do business for the better—sourcing clean energy, engaging in agriculture that protects the soil and sequesters carbon, and ending practices that harm workers, communities, and consumers. 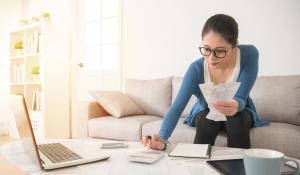 Concerned with not having paper receipts?
(November 23, 2020)

As our Skip the Slip campaign reports, in the US, over 3 million trees and 9 billion gallons of water are used each year for paper receipts, producing over 4 billion pounds of greenhouse gas emissions and 302 million pounds of solid waste (fr