Grounds for Change, a Certified member of the Green Business Network since 2007, is making waves as an industry leader for its impressive environmental sustainability and social commitments. This article originally appeared as the Impact department titled “Organic Coffee Changing the Lives of Peruvian Women” in the Fall 2016 issue of B Magazine.

Grounds for Change co-founder Kelsey Marshall remembers the precise moment when he and his wife, Stacy, got the idea for their family company. It was 2003, when the fair-trade movement was still in its infancy, and the couple was harvesting coffee beans — an educational interlude during a work trip to Costa Rica. Stacy ran an environmental nonprofit focused on protecting leatherback sea turtles in the Central American nation, and Kelsey, an e-commerce executive, was accompanying her.

“The pickers were Nicaraguan. They had crossed the border with their entire families, and I can remember clearly how the parents worked in the fields while the kids rested in the shade, beneath some trees,” Marshall says.

The Marshalls talked with the pickers and farmers, and learned of their challenges, including the difficulties farmers faced when they wanted to switch to organic production. Organic coffee farmers typically have lower yields than conventional farmers do, and the certification process requires a three-year conversion period before farmers are qualified to earn the premium price organic coffee brings in the marketplace.

“We were looking for a business that we could start small and grow, that we could bootstrap,” Marshall says. “Getting that sense of the conditions that the pickers were experiencing was vital. It inspired us to create a business that would champion both fair-trade and organic certification in order to get more money back into the hands of farmers.”

Using their savings, the Marshalls quit their jobs and launched Grounds for Change in Poulsbo, a laid-back town on Puget Sound in Washington state. Grounds for Change has grown steadily into a company that stands out, even in the highly competitive field of fair-trade and organic coffee roasters. Grounds for Change is the first U.S. roaster to gain carbon-neutral certification from Carbonfund.org, a leading third-party, carbon-reduction certifying organization in the United States.

Grounds for Change earned the seal by shrinking its coffee’s environmental footprint to a minimum Grounds for Change supply chain . The fair-trade coffee company works with growers who hand-pick shade-grown beans and avoid using charcoal-based fertilizers. And Grounds for Change buys offsets to make up for the energy used by its end-consumer coffee drinkers when they heat their water. 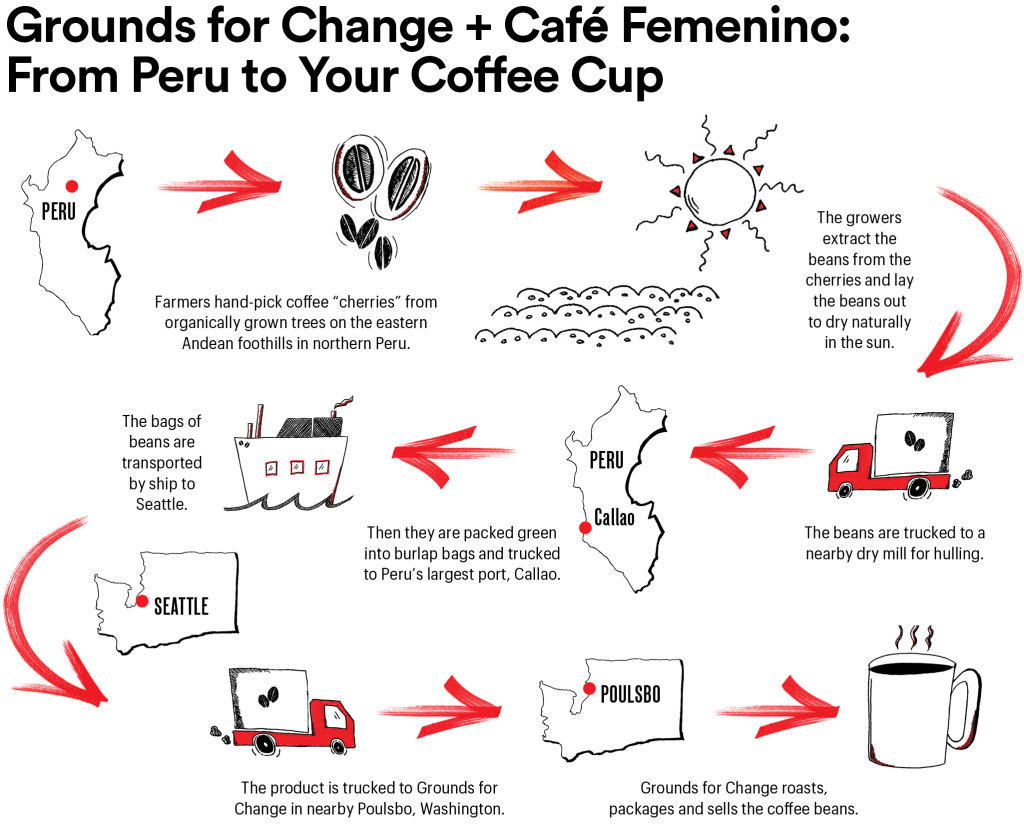 But the most interesting aspect of Grounds for Change’s push to make the coffee industry more equitable and sustainable may not be its environmental innovations. The company’s social commitments go above and beyond the formal requirements of its fair-trade certification and include its partnership with the groundbreaking program Café Femenino.

Founded in Peru in 2004, Café Femenino aims to support women within the often impoverished communities that grow coffee across the developing world, disrupting local power structures in ways that improve human rights and economic justice. Café Femenino is now one of the best-selling coffee brands of the Organic Products Trading Company (OPTCO), which is based in Vancouver, Washington, and wholesales the beans in North America to roasters such as Grounds for Change.

“It [Café Femenino] has revolutionized our lives,” says farmer Lili Leyva Alvites, 37. She adds that by choosing women-led organizations to grow its coffee, Café Femenino has empowered her and her female neighbors in La Florida, a small coffee-growing village in the lush eastern Andean foothills of northern Peru. By seeking out female farmers, the partnership has given those women freedom and power they have never experienced before. “The timidity has gone,” Alvites says of the role the women play in the local coffee-growers collective, and the community more generally. “Thanks to Café Femenino, we now have a say. We are on the council [of the collective]. Before, we were embarrassed to speak up.” 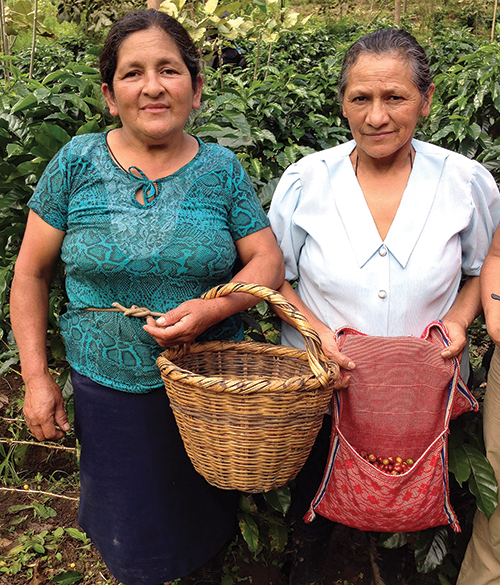 The idea behind Café Femenino is that the women, who tend to be responsible for children and the elderly in their communities, are more focused on using income in a responsible and sustainable way and in improving local resources. So far, the women who supply Café Femenino are proving its hypothesis.

“Now, we have more money for basic necessities, like food, education and medicine. Without Café Femenino, none of that would be possible; we were just scraping by,” says Alvites.

For Alvites, the necessities include earning enough cash — and with it the status to win her father’s approval — to finally finish high school, a rare achievement for a woman in this part of rural Peru. That accomplishment has allowed Alvites to take on a leadership role in her local coffee-growers collective, comprising 76 women and 96 men. The collective has been a supplier to Café Femenino since 2004.
Alvites has also been able to buy her own 5-acre plot of land and now harvests about 1 ton of her own coffee beans a year. Meanwhile, the villagers earn 50 percent more for their beans than previously, and women also take an active role, for the first time, in managing the collective.

“The biggest change happens when the women get involved in the decision-making process in a cooperative where traditionally only men have been in control,” says Connie Kolosvary, Café Femenino’s program director, who spends much of her time shuttling to various growers collectives. “Even if there is distrust initially from men, within a short time they see that by having the women take on this role, they are receiving more revenue, and they are not, in fact, running the business into the ground.”

In rural northern Peru, where roughly a quarter of the program’s women are based, this power shift addresses entrenched sexual inequality: A 2005 World Health Organization study found that 69 percent of women in rural areas near Cusco had experienced physical or sexual violence by a partner, and only half the women in the region had received at least one year of secondary education.

Café Femenino now supports 4,500 female producers from all over the world, including Bolivia, Mexico, the Dominican Republic and Rwanda.

Café Femenino’s success is founded, in part, on its partnerships with U.S. roasters. These partners include Grounds for Change, which sells to retailers and customers directly, getting higher prices for its quality coffees thanks to its positive environmental and social impacts. Grounds for Change’s customers will pay more for fair-trade, organic coffee bthecwhen they know their dollars are improving farmers’ lives. Marshall takes a long-term approach to value creation by building loyal, sustainable relationships with both his customers and the growers. 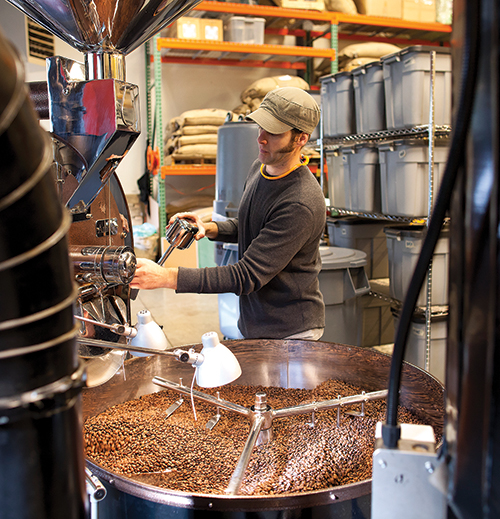 In addition to the Café Femenino label, Grounds for Change sells other Partnership Blends, including The Wildlife Land Trust blend and Save Our Wild Salmon blend.

Marshall won’t provide total revenue numbers, but says, “Our coffee is a good value, and comparable in price with other high-end specialty providers. We have just chosen to take a lower profit margin. There is lots of competition, but our long-term customers keep coming back to us because of the consistently high quality.”

Roasters of Café Femenino coffee must donate at least 2.5 cents per pound to the program’s nonprofit arm, the Café Femenino Foundation. Coffee growers in the program can apply for the Foundation’s grants, now averaging $4,500 each, to use for a range of community improvements — everything from workshops on the sustainable breeding of food animals (including guinea pigs, a traditional food staple in the Andes), to the installation of running potable water. “Grant requests are for a range of programs that improve the social status, nutrition, sanitation, education, and health of the women and their families,” says Café Femenino Foundation President Marilyn Dryke. The Foundation has given out an average of about $100,000 in grants per year, she says.

“The women will decide if their community will benefit from a library or even a better school,” Kolosvary says. Because it believes in the program, Grounds for Change donates an additional 10 cents per pound back to Café Femenino to support the grants.

The benefits of Café Femenino, and its commercial association with Grounds for Change, are even visible in the women’s physical demeanor, says Kolosvary. Over time, she notes, the timidity of some of the women vanishes. “When a program is first started, the women are often not even aware that they have rights. The change in awareness and self-esteem is something special to watch.”

This article originally appeared as the Impact department titled “Organic Coffee Changing the Lives of Peruvian Women” in the Fall 2016 issue of B Magazine.