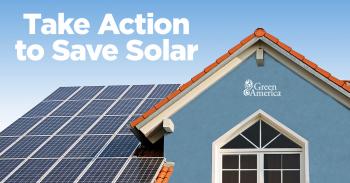 Today, the Federal Energy Regulatory Commission dismissed a petition by the New England Ratepayers Association (NERA) to end state and local jurisdiction over net metering programs. Ending these programs would have made rooftop solar no longer viable since homeowners would receive far less money for solar power they sell to the grid. The petition received bipartisan criticism across the country.

More than 450 organizations - including Green America and 8,500 of our members, 57,000 individuals and 37 states -- submitted comments opposing the NERA petition that could have upended net metering programs nationwide that helped grow the residential solar industry to over 2 million homes.