Today, Internet retail giant Amazon announced the first steps in moving to 100% wind power for the servers that power Amazon Web Services (AWS), its hosting subsidiary. In response to activists (including tens of thousands of Green America members) calling out the company’s failure to create sustainability goals or green their energy sources, Amazon Web Services, Inc. announced a power purchasing agreement from a wind farm in Indiana. The 150-megawatt Amazon Web Services Wind Farm (Fowler Ridge) project in Benton County, Indiana has agreed to supply AWS with up to 500,000 MWh (megawatt-hours) of wind-generated electricity each year for its data centers – or enough to power 46,000 homes each year. AWS hosts all of Amazon’s online operations, as well as many popular websites including Netflix, Pinterest, and Spotify. 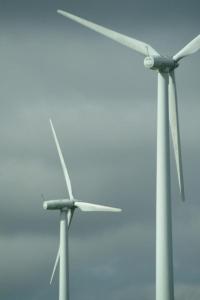 For years, Amazon has been in the rear in the race amongst technology giants to minimize their environmental impacts, coming in well behind Google, Apple, and Facebook in terms of greening its energy usage. Nearly half of AWS’s servers are based in the Northern Virginia region. Dominion, the region’s utility, generates electricity from a mix of 37% coal, 41% nuclear, 20% natural gas, and only 2% renewables. Greenpeace has led the efforts to push Amazon to use renewable energy for its servers by publishing several reports highlighting the company’s lack of environmental and sustainability efforts. Senior Climate and Energy Campaigner David Pomerantz greeted today’s announcement by stating, “As it invests in renewable energy, Amazon can give its customers greater confidence in its new green ambition by publishing information about its energy footprint, as Apple, Google, Microsoft and Facebook have done. Increased transparency will allow AWS customers to know where they and AWS stand on their journey to 100% renewable energy.” Amazon’s announcement today is a step forward, but the company still has far to go. For one thing, it is not yet clear to what extent Amazon’s current and planned servers will be powered by wind. In the fall of 2014 Amazon Web Services committed to a billion dollar investment in a new data center somewhere in Central Ohio – in proximity to one of the largest coal-producing regions in the US, and where 70% of the electricity in the state is produced by coal. AWS has declined to comment on details of the proposed project, and while it is possible that this new data center will be powered by wind from Indiana, there has been no indication that the site to the company’s renewable energy initiatives. Creating a greener energy footprint involves far more than simply purchasing power from one windfarm. A successful path towards greening operations includes measures to maximize energy efficiency, a strong commitment to long-term renewable energy generation, a departure from the renewable energy credits offered by utilities, increased investment in renewable technologies, and advocacy for policies that support renewables. As of now, Amazon is not disclosing any information regarding the path towards becoming a more sustainable company. That is why Green America is continuing to push Amazon to be more transparent about a wide range of sustainability measures, including energy usage. Amazon recently hired a sustainability director and publicly committed to switching to 100% renewable energy. However, the company is still not reporting energy usage data to the Carbon Disclosure Project and has offered no view into their plan towards reduced environmental impacts. Their recently announced deal in Indiana is welcomed and recognized as a step forward, but there is still much more to be done.