Amazon’s web services hold the company back, despite its attempts to promote the innovations of others. 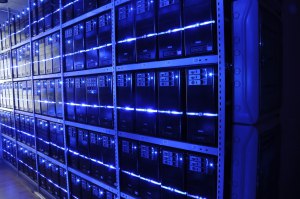 A row of servers in a data center.

Amazon Web Services (AWS) announced its second City on a Cloud Innovation Challenge today, but key changes must be made within the company before it can truly lead the innovation charge.

The City on a Cloud program, designed to recognize local and regional governments for technological developments that greatly contributed to their communities, comes at a time when its influential business clients are pressuring the tech giant to be more transparent in its energy portfolio.

“The cloud can be a powerful force to help our companies and our customers reach their greatest potential,” noted AWS clients, including The Huffington Post and tumblr in a letter to Amazon’s Senior VP of Web Services, Andrew Jassy. “But given the threat of climate change and the significant amount of electricity needed to power the cloud, we are increasingly concerned about our responsibility as companies who value sustainability and share concerns about climate change.”

By powering its data centers with unsustainable fuel sources, Amazon is missing out on key innovations in the field of renewable energy–innovations that have the potential to create thousands of new jobs, reduce healthcare costs, and improve the health of our environment. 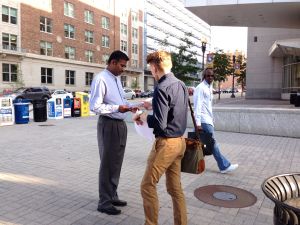 Handing out information on AWS’ energy use at it’s GovCloud conference in Washington, DC.

As a part of Green America’s Amazon: Build a Cleaner Cloud campaign, we teamed up with representatives from Greenpeace to talk to attendees of AWS’ June 25th GovCloud conference in Washington, DC.

Representing governmental, educational, and nonprofit fields, these GovCloud clients have the perfect opportunity to demand greater transparency in Amazon’s renewable commitment. In refusing to be transparent about its energy usage and plans, AWS deprives these influential groups of the ability to make responsible, informed decisions about where to invest public money.

Merely committing to using 100% renewable energy, as AWS has done, is meaningless without a clear plan to achieve this goal. We’re calling on AWS customers to reach out to their AWS representatives to demand greater transparency in Amazon’s energy future and cease the construction of new data centers that rely on non-renewable energy.

Companies like Google and Apple, whose data centers are powered by renewables, have demonstrated that such a business model is profitable, and Amazon must keep up in order to remain competitive.

Help encourage AWS to deliver on its responsibility to build a cloud that works for both our communities and our environment. Take action with us by signing our petition at buildacleanercloud.com.