EPA Speaks Out on Keystone Pipeline

The Keystone XL Pipeline, which would carry roughly 830,000 barrels of tar sands crude oil from Alberta, Canada to the Gulf Coast in the US, has been one of the most polarizing issues in American politics over the past few years. Environmentalists recognize that the pipeline will do little more than encourage continued tar sands extraction, one of the most carbon-intensive oil production methods on the planet. Supporters of heavy industry see the pipeline as a crucial piece of infrastructure that will create a more robust economy including jobs and increased energy security (although the Keystone would produce very few permanent jobs). President Obama has stated that the future of the pipeline project depends on whether or not it will contribute further to climate change. 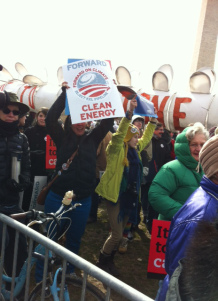 Protestors oppose the Keystone Pipeline at a Rally in Washington, DC[/caption] This week, the EPA weighed in on the State Department’s environmental impact statement, using authority granted by the Clean Air Act (CAA) and the National Environmental Policy Act (NEPA). The letter sent to the State Department from the EPA outlines their findings that the pipeline would indeed contribute to climate change. The production, transport, and refining processes, and the burning of the final product would result in an additional 1.3 -27.4 million metric tons of CO2 each year. On the high end, that’s equivalent to the GHG emissions from 5.7 million passenger vehicles or 7.8 coal-fired power plants. With oil prices currently lower than most economists expected, construction of the pipeline would make it cheaper to transport tar sands oil than the current method of shipping it by rail, and would most likely result in increased tar sands production. Although Congress has voted many times in attempt to pass the pipeline without presidential authority, the project remains to be approved. The President has vowed to veto any attempt to force the pipeline into construction before environmental assessments were turned in and considered. The EPA’s comments all but confirm that the pipeline will contribute to climate change, in the face of massive skepticism and denial from supporters of the project. The letter may give the president the confidence he needs to stand up to fossil fuel interests and knock down further attempts at its passage. To learn more about the effort to block the construction of the pipeline, click here, here, and here. You can also take action with Green America, urging President Obama to veto the pipeline