Sorry Donald: Coal Will Never Be Clean and It Is Not Making a Comeback

When Donald Trump signed an Executive Order this week to roll back the Obama Administration’s Clean Power Plan, he did so surrounded by coal miners and executives. The event was deliberately staged at the EPA just to make clear his complete contempt for the agency’s work to address climate change. His message to the coal industry was also clear: the US is going to turn back the clock and increase our use of coal to generate electricity.

This is one area where Trump is consistent: throughout his campaign, he promised that he would bring back coal mining, and bring “clean coal” power to the country. However, reality just won’t cooperate. Coal is not clean, and the industry is not going to make a comeback, no matter what the White House or Congress does.

Coal’s decline is going to continue no matter what 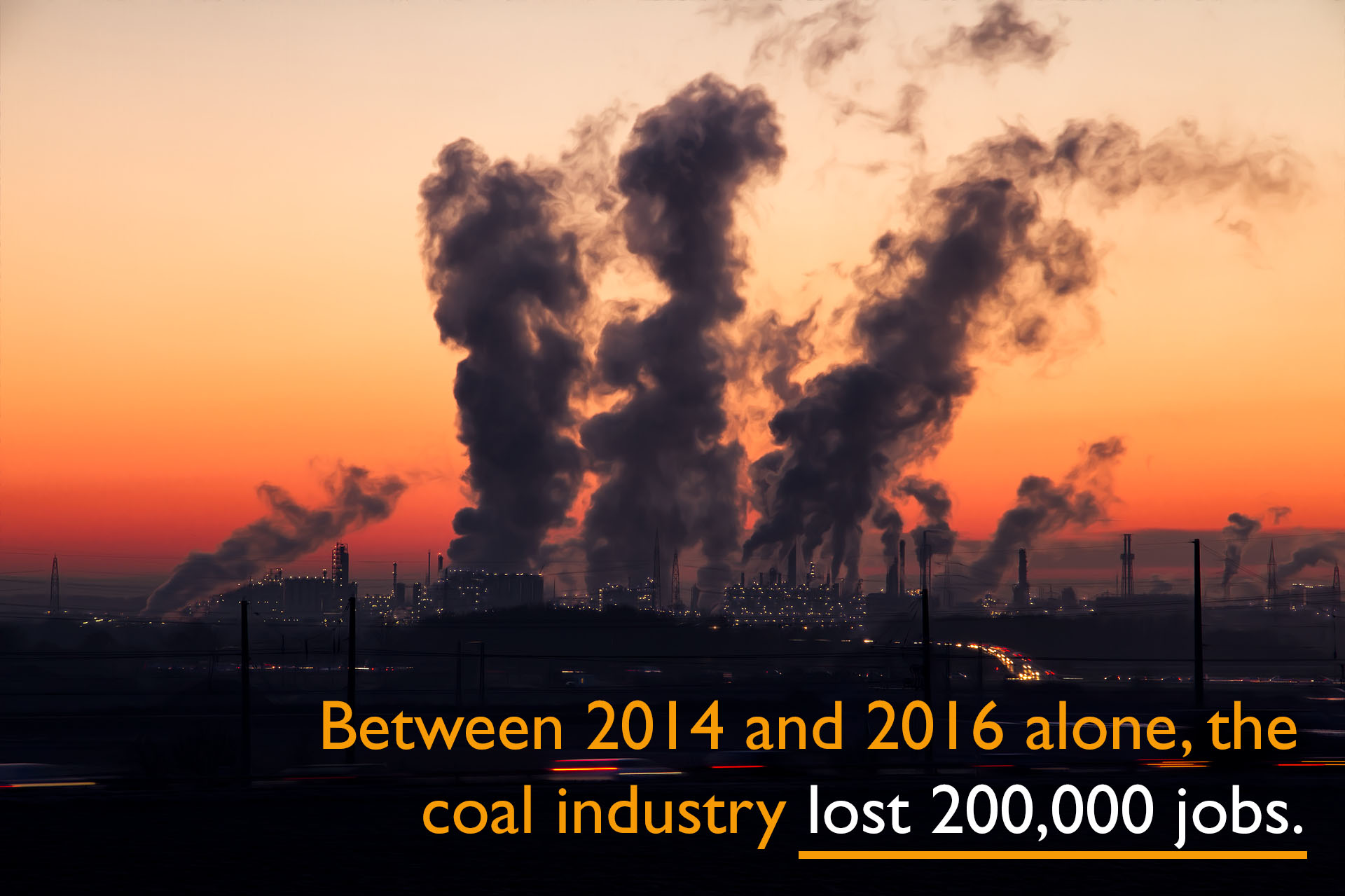 Coal is the MySpace of electricity production—everyone’s abandoning it for better technologies. Natural gas, wind, and solar are all cheaper. Even American Electric Power (AEP), one of the dirtiest utilities in the US, has made it clear that the decline of coal is inevitable. In a recent Bloomberg article about the decline of coal, AEP spokeswoman Tammy Rideout said, "We will continue our transition to more natural gas and renewables as we balance out our generation portfolio and provide cleaner energy." When even coal’s best friend in the utility sector is running in the opposite direction, all hope is lost for coal.

Not surprisingly, the coal-mining industry has been shedding jobs at a precipitous rate for years. Between 2014 and 2016 alone, it lost 200,000 jobs.

Undoing Obama’s Clean Power Plan may slow the decline of coal slightly, but it will continue to decline. When he promises to bring back coal-mining, Trump is playing on the nostalgia of coal-mining regions, which have seen a sharp decline in their living standards, but he may as well have traveled to New Bedford, Massachusetts—once the whaling capital of the world—and promised to give everyone a harpoon and a whaling ship.

Coal will never be clean

Proponents of coal say that it can be burned cleanly, and if it’s burned cleanly, it will make a comeback. What they usually mean is that the carbon emissions from coal-fired power plants can be captured and pumped underground. There are two major problems with so-called “clean coal” technology: 1) it is ridiculously expensive, and 2) it does not address the environmental and health impacts of mining coal, or the waste that remains from burning it.

First, the problem with the economics. The US has been trying to build a commercially viable carbon-capture coal plant in Georgia for years (partially funded by taxpayer dollars). However, the cost of Southern Company’s Kemper “clean coal” plant is approaching $7 billion, and is about 300 percent over budget. The plant is slated to generate just 500 MW of energy, enough to power a little over 300,000 homes, and will likely be the most expensive power plant per megawatt hours of electricity ever built in the US.

To put that into perspective, Southern Company could have built a 500 MW solar power plant for just $1.8 billion. Or, they could have built four solar plants, generating four times as much power, for the price of one carbon capture coal plant. Of course, Southern Company can pass the cost of this boondoggle onto its ratepayers and taxpayers, but clearly, spending four times as much as needed to generate power is not a recipe for success for the country as a whole.

Second is the environmental problems with “clean coal.” Even if you are capturing the carbon, you are still mining coal, and coal mining is a very dirty business. Congress and Trump recently made it even dirtier by repealing the Stream Buffer Rule, which would have protected waterways from some of the worst impacts of coal mining.

And coal’s toxic impacts don’t stop at mining. When you consider the full life-cycle of burning coal, the environmental and health impacts are truly alarming. A landmark 2011 study, published in the Annals of the New York Academy of Sciences and written by faculty at the Center for Health and Global Environment at Harvard Medical School, found that the true cost of coal is up to one-half trillion dollars per year, when all environmental and health impacts are added in. Based on this true cost accounting, all clean energy sources are much cheaper than coal. Of course, this cost accounting cannot put a real value on the shortening of the life of a miner, or a person with asthma, or a person living in a community with polluted drinking water.

Trump’s campaign played on the nostalgia of coal country for a time when coal was king. This is a cruel and cynical ploy on his part. He knows that coal is not making a comeback. What he should be offering these communities is assistance in moving their economies to cleaner technologies and better-paying jobs.

Right now, he’s doing the opposite. Trump’s proposed budget actually cuts funding for programs that retrain workers in coal country for jobs in the technology and clean-energy sectors.

If all of this is making you angry, the best thing you can do is call your representative and senators and let them know that you support full funding for the EPA, and you support fully funding job-training programs that will actually help people in coal country. Call the Congressional Switchboard at (202) 224-3121 today to be connected to your two senators and representative to let them know you oppose the Trump budget and expect them to pass a budget that supports people and the planet.