Exactly two years ago, Hershey announced it would source only ethically certified cocoa by 2020. This announcement came after years of pressure on Hershey to prevent child labor on West African cocoa farms from Green America members and our allies Two years later, we’re checking on Hershey’s progress and on how these commitments have impacted cocoa growing communities. But first, a little back story… 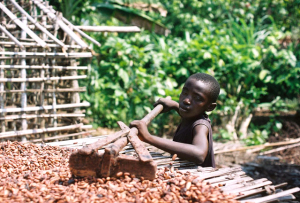 In 2001 the world was shocked by stories of horrific forced child labor in West African cocoa growing communities. In response, a “slave-free” label was proposed by US lawmakers. The chocolate industry defeated this proposal and instead signed on to the Harkin-Engel protocol, to voluntarily fix child labor in their supply chains. A decade went by with the industry missing deadline after deadline to stop child labor, as their profits soared. Very little progress was made to prevent child labor among most major chocolate companies.

September 2010 Green America and our allies grew tired of waiting for big cocoa to act on its own to fix child labor. We launched our Raise the Bar, Hershey! Campaign, calling out Hershey, the largest US chocolate manufacturer, as a laggard in addressing child labor problems in its supply chain. In 2009, Mars had already committed to sourcing 100% sustainable cocoa by 2020. 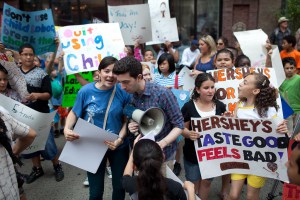 September 2011 With growing consumer awareness and outrage, Green America published “Still Time to Raise the Bar” to keep the pressure on Hershey[1]. The report called out Hershey’s failure to address child labor and other labor abuses in its supply chain (a topic that Hershey failed to mention in its own corporate responsibility report). The report acted as a catalyst for tens of thousands of people to write to Hershey. Consumers and religious allies took part in protests at Hershey stores, and investors called on the company to address child labor as well.

August 2012 Consumer pressure continued to escalate on Hershey, and retailers started putting pressure on the cocoa giant as well. Green America united food coops, specialty retailers, and Whole Foods to voice their concerns regarding child labor in Hershey products. Whole Foods agreed to drop all Hershey products from its stores.

October 2012 Hershey announced it would ethically source 100% of its cocoa by 2020, but does not disclose an incremental timeline or which certification it will use.[3]

March 2013 In response to ongoing pressure, Hershey shares it plans to worker with Fair Trade USA, Utz and Rainforest alliance for certification, and that it will reach 10% certification by the end of 2013, 40-50% by 2016.[4]

January 2014 Hershey announced it was ahead of its original goal, reaching 18% certified cocoa[5].

Today: Green America is pleased that Hershey has followed through on its plan to move to certified cocoa, and is in fact ahead of schedule. Eight years is a long time in the life of a child, so the sooner Hershey can purchase cocoa that comes from farms that screen out child labor, the better. Child labor remains an urgent issue in West Africa’s cocoa sector, and one that stems from extreme poverty. The average income of West African cocoa farmers and their dependents is well below the level of absolute poverty, according to the Cocoa Barometer.

Two years after Hershey’s announcement to ethically certify its chocolate products, we’re celebrating the impact consumers can have when they band together to make change happen! Over the next two years, we’ll continue to monitor Hershey, to ensure the company meets or exceeds it 2016 commitment of 50% certified. We’ll also put pressure on companies who have not taken steps to trace their cocoa supply, like Godiva.

Thank you for taking action with us!