The Shame of Stereotypes as Team Mascots

Despite a love of football, Suzan Shown Harjo has attended exactly one of her home team’s NFL games, back in 1974. The team was the Washington Redsk--s. [Editor’s note: Green America has made it our policy not to print this racial slur in its entirety. From here on, we will use the term “R-word.”]

Harjo—a poet, writer, lecturer, and policy advocate who has helped Native Peoples protect sacred places and recover more than one million acres of land—recalls one fan who was seated behind her and her husband saying of the couple, “I think they’re [R-words].”

She gently replied, “No, I’m Cheyenne and Muscogee, and he’s Muscogee.”

But the odd fan behavior continued. The couple heard people whispering behind them to “look at the [R-words]” or “look at the Indians,” and some even started petting their long hair, asking others to “look at this [R-word] hair.”

The game hadn’t even started.

“We had to get up and leave,” she says. “That is the real effect of objectification—where you take away a person’s humanity and are just touching them in inappropriate ways.”

As part of building a socially just economy, Green America joins Harjo and other tribal activists in calling for an end to the use of all stereotyped mascots and team names—starting with the R-word as the worst example. Whether you’re a sports fan or not, you can use your economic power as a potential purchaser of sports tickets and team logowear—as well as a customer or shareholder of corporate team sponsors—to discourage the use of racial slurs and caricatures.

A Slur with Tragic Origins

While some sports fans dismiss concern over use of the R-word as a case of political correctness going too far, the vast majority of Native Americans feel this word is tremendously painful, given its tragic history, the fact that it is a dictionary-defined “racial slur,” and the manner in which it ignores their cultural heritage and contributions.

Washington football team owner Dan Snyder has maintained that the R-word name is a point of honor that celebrates William “Lone Star” Dietz, the team’s first coach, whom they claim was Sioux.

They are mistaken, says Harjo. FBI documents show that Dietz was a German-American who stole the name of James One Star, an actual Sioux man, hoping to both avoid being drafted into WWI and to cash in on famed athlete Jim Thorpe’s fan base. He even went so far as to write letters to One Star’s sister pretending to be James, as she testified at Dietz’s draft-evasion trial.

But even if you ignore the Dietz connection, the R-word itself has truly shocking origins. Harjo says that even near the turn of the 20th century, bounty hunters traversed the country killing Native Americans and bringing in “their bloody red skins,” or scalps, as proof. And while Western films would lead us to think that “scalp” solely means the skin on the top of one’s head, Harjo says it was also often the genitalia.

And so, the people who were being killed became known by a word that their murderers saw as descriptive of their sole value—one describing the skins that they could rip away and sell.

“This is the worst word that we can be called in the English language,” she says. “This is the N-word for us.”

The Effects on Native Youth

While the R-word may be the worst example, all Indigenous stereotypes used as team names or mascots—from the Cleveland Indians to the Seminole High School Chieftains—contribute to an epidemic of depersonalizing and reductive behavior that many say is especially harmful to Native youth. 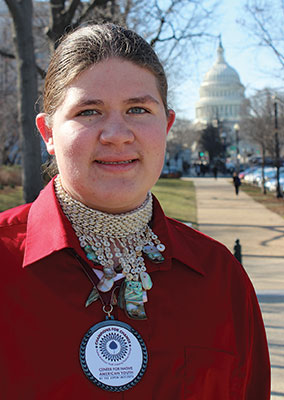 Photo by Vincent Schilling @VincentSchilling
Dahkota Brown was elected a 2013 Champion for Change by the Center for Native American Youth for his work with Native students.

A new report from the Center for American Progress (CAP) found that “these team names and mascots can establish an unwelcome and hostile learning environment for [American Indian/Alaska Native] AI/AN students.” The report also says these mascots “directly [result] in lower self-esteem and mental health” for these young people. And, says the report, studies show that these mascots “undermine the educational experience of all students, particularly those with little or no contact with indigenous and AI/AN people.”

The American Psychological Association concurs, calling for “the immediate retirement” of these team names and mascots in 2005 for all of the reasons stated in the CAP study.

Dahkota Franklin Kicking Bear Brown, a 15-year-old Wilton Miwok, knows these reasons firsthand. He says that while growing up, he always dreaded the days when his school plays their arch-rival—the Calaveras [R-words].

Brown describes the Calaveras sideline routines as featuring “a war-bonnet clad warrior on top of the announcer booth who does the stereotypical Indian drumbeat after every touchdown, fans throwing tomahawk chops,” and “cheerleaders in skimpy outfits resembling traditional buckskin outfits.”

Worst of all, he said in a speech for the Center for American Progress that went viral online this spring, “By having a racial slur of a name, Calaveras has granted all schools that they go against the right to mock and make fun of Native Americans. ... I’ve heard my friends yell ‘Kill the [R-words]!’ or ‘Send them on the Trail of Tears!’”

While some have argued that using a team name like the Chiefs or the Indians is meant to “honor” Native Americans, too often schools fail to respectfully celebrate their Native students’ individual cultural heritage.

As reported by the Indian Country Today Media Network, one egregious case was that of Seminole High School in Seminole County, OK, which uses a headdress-wearing mascot to represent its Chieftains teams. Last spring, 25 senior students at the school, who were members of the Seminole, Creek, Choctaw, and Chickasaw nations, received eagle feathers from their tribal leaders to honor their impending graduation. The students tied the feathers to their graduation caps, some adding tribal beads as well—only to be ordered by the school not to wear them. (At least one student, Kaden Tiger, wore his anyway.)

“Native youth have the highest dropout rate, the lowest graduation rate, the highest suicide rate among any ethnicity,” says Brown. “I think it is tied in part to these mascots. Our teens see these images, and it gives this false sense that we’re savages. These teens lose their cultural identity and don’t feel they fit in anywhere.”

When he was just in eighth grade, moved by “friends and cousins I saw who were on the verge of dropping out,” Brown took matters into his own hands. He started a nonprofit called NERDS (Native Education Raising Dedicated Students), which provides peer-to-peer tutoring and mentoring for Native students in seven California chapters with more to come nationwide.

“A lot of what I hear from the students is that these Native mascots really do have an effect on their lives an their self-esteem,” says Brown.

A Victory in the (Trademark) Courts

The tide of public opinion does seem to be turning against the use of stereotyped Native team names and mascots. In the 1960s, the National Indian Youth Council, Native students, and supporters attempted to persuade the University of Oklahoma to retire its mascot “Little Red,” which it did in 1970. At that time, there were more than 3,000 similar mascots at K-12 and post-secondary schools. Today, there are just over 900.

One recent victory may make it more difficult for teams to profit from merchandising if their name or logo is a Native stereotype. In 1992, Harjo and others filed a request with the US Patent and Trade Office’s Trademark, Trial, and Appeal Board (TTAB), asking it to cancel the six federal trademark licenses owned by Pro Football, Inc.—the corporation headed by Dan Snyder that owns the Washington NFL team—because the R-word is “disparaging to Native Americans.”

After two separate filings (due to the first being dismissed on appeal on a technicality by a DC District Appeals Court), TTAB agreed to cancel the six trademarks in June.
Pro Football filed an appeal in August, and it may legally keep its trademarks for now. But with people like President Obama and Hillary Clinton speaking out against the name, and high-profile news sources like the Seattle Times refusing to print the R-word, it’s clear that public sentiment is shifting. If Washington changes its name, others may follow.

When Green America contacted the Washington team, it sent this statement: “Thanks for your interest on this. We appreciate and respect your opinion, like everyone’s. We will consider it as we move forward.”

They and other teams with similar names will undoubtedly have to do more than consider such opinions if they hear from enough unhappy potential ticket-holders. Take action today:

Harjo isn’t asking Washington football fans to boycott their team, stressing that it’s perfectly okay to “support the team and hate the name.”

And while people often ask why she doesn’t have something more important to worry about, she would like them to realize that this issue is important: Any stereotyped mascot “is a symbol, and symbols come out of attitudes, create attitudes, and lead to actions,” she says.

NVN’s Castro agrees, calling the fight against these mascots “an important civil rights issue.” She says: “We have a right not to be discriminated against. When we show up to public events, everybody should have a right to feel safe, but we don’t when we hear people saying, ‘Kill the Indians!’ [The country] can and should be doing better.”

How Can Your Business Support Reproductive Rights?