The Money-Saving Perks of a Hybrid Car

In light of the climate crisis and wildly fluctuating gas prices, many Americans are looking for ways to drive less, bike more, and choose public transportation—and Green America members are leading the way. But unless you live in the heart of a city with an excellent mass transit or car sharing system, driving your own car can often be a necessity.

If you can afford to trade in an older, inefficient car for a much more efficient one, the greenest choice is to do so. For those who need to purchase a car right now, one of the greenest options is a hybrid car that gets at least 40 miles per gallon (mpg). There are also over 30 models of plug-in hybrid or pure-electric vehicles, which get up to 315 miles on a charge (Tesla Model S).

Some car buyers might assume that they can’t justify the up to $5,000 more it can cost to purchase a hybrid vehicle over a comparable conventional one, especially when gas prices are low. But in fact, hybrid cars bring their drivers a variety of financial savings and other perks that go beyond saving money at the gas pump—and can make a hybrid purchase more budget- savvy than buying a conventional car.

Save Money, Save the Earth

In today’s hybrid cars, a battery provides an electric assist to the gas-powered engine, achieving 20–35 percent better gas mileage than conventional cars. The 2017 Toyota Prius, for example, gets 50 mpg overall in real-world driving, and has been the leader in best mpg for hybrids for years. Of course, models from other makers do nearly as well.

In 2012, President Obama signed a law that will increase the fuel economy to 54.5 mpg for cars and small trucks by Model Year 2025. Drivers who choose more efficient hybrid cars today are helping to support this target in time to prevent the worst impacts of the climate crisis. Also, hybrid cars emit less ground-level air pollution than other cars, including 29 percent less smog-producing nitrogen oxide. Even if some very efficient conventional cars can get “hybrid-style” mileage, only hybrid cars also help maintain healthier air.

(Note: Although President Trump froze fuel economy standards at their projected 2020 level in 2018, in January 2020 the administration agreed to slowly raise standards again, this time at a rate of 1.5 percent per year. This, however, is still far below the Obama-era standards, making ethical consumer choices even more important in the auto industry.)

When Bryan Palmintier and his wife were looking to purchase a car, he was working as a fellow at the Rocky Mountain Institute, a think tank focusing on energy and other resource issues. So he set out to quantify how some financial benefits to hybrids aren’t reflected in the sticker price. In his widely-circulated blog post, “Rethinking the Cost of Hybrid Cars,” which he co-write with Noah Buhayar, Palmintier proves that drivers in need of a new car shouldn’t assume they can’t afford a hybrid until they’ve taken a full accounting of all of the ways that hybrid cars can save them money.

“A lot of people get sticker shock when they look at the price of a new hybrid,” he writes, because “the added expense won’t pay itself back very quickly on fuel savings alone. ... But this quick analysis misses a number of hybrids’ other economic benefits.”

New hybrids may entitle their owners to federal tax credits ranging from $250 to $3,400. How much a given hybrid owner can expect to get from the federal hybrid tax credit depends on many factors, including the car’s fuel economy, and how popular a given model is. Some models have already exceeded their quotas and are no longer eligible for any tax credit, and the recently passed economic stimulus bill did not extend or expand these credits. To see how much of a tax credit you might be able to claim, consult the Internal Revenue Service. Additionally, as of 2019, the federal Plug-In Electric Vehicle Credit offers a tax credit of between $2,500 and $7,500 for any car with charging capabilities, which includes plug-in hybrids.

State and City Incentives and Perks

Some states and cities offer incentives for hybrid drivers, including tax credits, and the convenience of being able to drive solo in “HOV” (high-occupancy vehicle) highway lanes. Many cities also offer privileges to hybrid owners, including free or discounted parking. Contact your city clerk’s office to find out if a new hybrid would entitle you to parking perks when driving around town.

A growing number of employers are encouraging their workers to commute in hybrid vehicles. At some forward-thinking companies, including Green Business Network™ members My Organic Market, Patagonia, and Clif Bar, employees receive up to $5,000 for purchasing or leasing a hybrid, essentially eliminating the price premium. A list of businesses that offer hybrid employee benefits can be found here.

Some universities provide special parking rates for faculty- and student-owned hybrids, and some hotels reward hybrid drivers with free parking. Be sure to ask your employer, school, and the other institutions in your life if they have special benefits for hybrid owners—or if they’ll consider creating some.

Financing a hybrid purchase can be cheaper than financing a conventional car. Many banks, especially credit unions, offer preferential loan rates for hybrid cars. For example, Meriwest Credit Union in the Greater Bay Area and Tucson, AZ, offers a 0.25 percent rate discount on any auto loan for new or used hybrid vehicles.

A number of car insurance providers, including Farmers Insurance Group, Geico, and Travelers, offer discounted insurance rates to hybrid drivers in some states. Be sure to inquire about how choosing a hybrid might save you on insurance.

Hybrid owners shouldn’t expect any higher or more frequent maintenance or repair costs than owners of conventional cars, according to Consumer Reports. Generally hybrid cars come with a standard three-year/36,000 mile warranty, as well as an additional warranty guaranteeing the special hybrid technology (100,000 miles for Toyota hybrids and 80,000 in Honda hybrids, for example). In fact, the technology that a hybrid uses to recoup energy during braking actually means that hybrid cars’ brake pads last three times as long as those in a conventional car, reducing the frequency of break pad replacement.

When it comes time to resell a car, hybrid owners have been delighted to discover that their cars have held their value better than non-hybrid versions of the same model. For a quick estimate of the average resale value for a car of the type you’re considering, Buhayer and Palmintier suggest consulting the Kelley Blue Book to look up models of the car you’re considering that are about as old as you’d expect your car to be when you resell it.

For example, Palmintier thought he’d drive a 2008 Prius for three years, so he looked back at the current resale value of the 2005 Prius, in contrast to comparable non-hybrids. The 2005 hybrid was reselling for $4,000–6,000 more than the resale values of two 2005 non-hybrid models.

Even if gas prices have dropped temporarily, we can count on them going back up again eventually as we approach peak oil supplies worldwide. So the real-dollar value of a hybrid car’s better mileage is likely to increase over the course of the time you would own and drive it.

When Shira Fischer moved away from a transit-friendly city to begin medical school in Worcester, MA, she needed to purchase a car; and she was willing to spend several thousand dollars more to get a hybrid.

“I didn’t want to own a car,” recalls Fischer, who’s since come to love her Toyota Prius. “But I knew I had to get one, and I knew I wanted to minimize the effect on the environment.”

For Fischer, economic perks have combined with less tangible benefits: “Accounting for the hours I spend in it, the tax rebate, the saved gas, and how good I feel about it, [the price premium] was definitely worth it.”

“The best part is all the people who stop and ask me about my mileage,” she says. “I feel like I’m a commercial for environmentalism wherever I go."

What You Can Do About Sweatshops 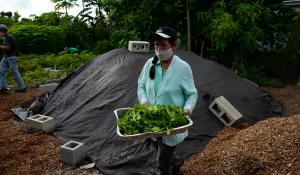 Immigrants and migrant workers are overwhelmingly the people responsible for getting food from fields onto American plates. When they don’t make enough money for their own food, communities create solutions.