Shareholder activists usually play the long game, filing shareholder resolutions with companies, requesting dialogues with corporate managers, and issuing investor statements calling for industry-wide action. These efforts add up, over time, to spur social and environmental changes at corporations. But last December, an investor coalition led by Green Century Capital Management took rapid, emergency action to save one Pennsylvania family from having to drink water contaminated by natural gas fracking.

“Most of the filings and discussions with companies take place over at least six months, and sometimes it takes years to secure the changes you seek,” says Green Century president Leslie Samuelrich.

“But Green Century has started a rapid-response program to weigh in on important and timely issues.”

That program recently came to the aid of Tammy Manning and her family. The Mannings had moved to Franklin Forks, PA, a few years ago, just as energy companies were ramping up hydraulic fracturing operations in the Marcellus Shale region, an area stretching across Pennsylvania, New York, West Virginia, Ohio, and Maryland. When WPX Energy opened up two fracking wells near the Mannings’ property, Tammy noticed that something was very wrong in her household.

Her granddaughter Madison started waking up in the mornings vomiting, and this happened several times a week. Eventually, Manning pinpointed the family’s drinking water as a potential cause of the problem.

Natural gas fracking involves shooting thousands of gallons of chemical-laden water into rock formations deep in the ground to extract the natural gas contained below those formations. The process can result in fracking chemicals or methane—the main component in natural gas—leaking into drinking water tables. Fracking has negatively affected 161 wells across Pennsylvania, according to the nonprofit Environment America.

Manning called her township office, which directed her to WPX. WPX in turn called in the state Department of Environmental Protection to test the Mannings’ water.
“He came in, turned on the faucet in the kitchen,” Manning told Environment America. “He held a wand next to the faucet, and it started beeping and sounding off like crazy.”

The state investigator found toxic heavy metals and flammable methane in the Mannings’ water. It asked WPX to install a water tank on the Mannings’ property to replace the contaminated drinking water, and Madison’s health took a dramatic turn for the better shortly thereafter.

Late last year, however, WPX obtained a court order to seize the water tank on or after December 16th. While the Mannings thought WPX had given them the tank, a judge sided with WPXruling that the tank was on loan, and the company could take it back when it wished.

“To us, it seemed like petty vindictiveness and spiteful, beyond-the-pale behavior, the kind of corporate behavior where if the spotlight was shone on it, they would perhaps back away,” says John Rumpler, senior attorney at Environment America, which Manning contacted for help. “We thought direct pressure on the company could have an impact.”

So Environment America called on Green Century, with whom the organization had collaborated in the past.

“People like Tammy Manning are living on the front lines of fracking, and their kids are getting sick, their water’s getting contaminated, their air is getting polluted,” says Rumpler. “This wasn’t the kind of thing that could be addressed through political channels, so we thought that turning to our friends at Green Century, who regularly engage in shareholder activism, would be a natural way to address this.”

With only a matter of days in which to act, Green Century pulled together a group of investors to issue a shareholder response letter asking WPX to allow the Mannings to keep their water tank.

The pressure worked. Within less than a week, WPX agreed to continue to supply clean drinking water to the Mannings and other affected families in the area.
“We are monitoring the situation to do everything we can to make sure the Mannings have access to the water they need to drink, bathe, and cook for as long as they need it—it is the minimum that should be provided,” says Samuelrich.

“We had been tracking the issue and wanted to signal support from the investment community,” says Samuelrich.

So the company organized 40 institutional investors with over $270 billion in assets under management to call for “the development of transparent, traceable, deforestation-free palm oil supply chains.”

“In less than a month, Wilmar and Unilever announced their new policy, which is already having positive reverberations up and down the supply chain,” says Samuelrich.

Toxic Gadgets
The Conflict Mineral Question
What Can We Do About E-Waste?
Safer Sunscreen for Summer
Shareholders Take Emergency Action to Protect “Fracked” Family
Learn about our sponsor. 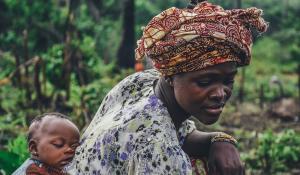