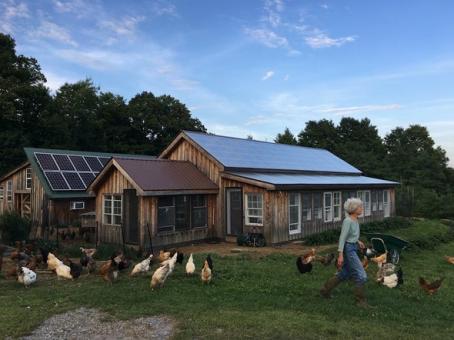 This article originally appeared in Scientific American, on August 20, 2019

Editor’s Note (9/3/2019): This post has been substantially rewritten to change or eliminate claims and sourcing that did not meet Scientific American’s editorial standards. The revised post can be found here.

As food writer Mark Bittman recently remarked, since food is defined as “a substance that provides nutrition and promotes growth” and poison is “a substance that promotes illness,” then “much of what is produced by industrial agriculture is, quite literally, not food but poison.” Of course, it doesn’t have to be this way. Eliminating pesticides and transitioning to organic regenerative farming can get us back on track to nutritious food, restore microbiomes and protect our health. Let’s break all this down, and then talk solutions.

“You would have to eat twice as much broccoli today to get the same nutrients as a generation ago.” That is according to data from the U.S. Department of Agriculture, from 1975 to 2010, as reported by Planetary Health/Amberwaves. So much chewing! And in fact, the situation may be even more dire. Data going back to 1940, as reported by Eco Farming Daily, shows: “The level of every nutrient in almost every kind of food has fallen between 10 and 100 percent. An individual today would need to consume twice as much meat, three times as much fruit, and four to five times as many vegetables to obtain the same amount of minerals and trace elements available in those same foods in 1940.” Thank goodness for multivitamins, but we’ve also got to fix this.

Why are nutrients in our food declining? Well, for one, we are killing the soil it grows in. Prodigious use of biocides (herbicides, insecticides, fungicides, as well as synthetic chemical fertilizers and antibiotics) kill or disrupt soil microorganisms that allow plants to absorb nutrients. Also, increased atmospheric CO2 is accelerating photosynthesis; plants grow faster but contain fewer nutrients, which is expected to lead to worldwide nutrient deficiencies. Vegetables becoming more like sugary snacks? Not good.

Not only are plants getting less nutritious, they’re also getting more toxic. For example, over 90 percent of corn plants, the U.S.A.’s number one crop, are genetically modified organisms (GMOs), with genes inserted from other species. These genes allow corn to be sprayed repeatedly with multiple weed killers including: glyphosate (in Monsanto’s Roundup, the most used herbicide ever), 2,4-D (similar to dioxin and Agent Orange) and dicamba. These herbicides are water soluble and systemic; they can go anywhere water goes, and they get inside the plant’s cells, so the toxins can’t simply be washed off before you eat.

Plus, GMO corn is also engineered with genes that enable it to produce multiple insecticides in every cell, which the EPA euphemistically terms “plant-incorporated protectants.” On top of that, GMO corn seeds are coated with neonicotinoids (associated with bee colony collapse and harm to other insects) and with bright turquoise fungicide, and the bags have a warning label not to touch the seeds with your bare hands or allow pets nearby. Of course, all of these genetic modifications become obsolete, as nature quickly evolves resistance, and we have created a toxic arms race. So, what does this mean for us? Well, because corn is in so many foods (corn syrups, oils, and products of corn-fed farm animals, etc.), we are often ingesting several toxins with each bite. Not good.

Broccoli exemplifies the “green revolution,” begun after World War II, when our munitions factories were repurposed for mass production of synthetic nitrogen fertilizers and pesticides, and large-scale industrial, monoculture farming began. GMO corn exemplifies the “gene revolution” of industrial agriculture of the last two decades. It is said this chemical and technological transformation of our food system is necessary to feed the world, but there is reason to be skeptical. It has only sometimesresulted in increased yields, while producing less nutritious and more toxic food, and much of that goes to animal feed.

Both revolutions are heavily fossil-fueled—synthetic fertilizers and pesticides, huge tractors and combines, processing and precooking, plastic packaging, refrigeration and long-distance transport—contributing to industrial agriculture being a leading cause of climate change.

Both revolutions are dangerous for human health. The epidemic of 20 chronic diseases—including diabetes, obesity, breast and thyroid cancers, stroke and autism—is highly correlated with the rise in production of “Roundup Ready” GMO corn and soy, both sprayed with glyphosate. Meanwhile, our less nutritious food reduces our ability to fight off these diseases.

Doomsday scenario? Well, maybe. Or time for a third revolution.

A microbiome is simply a community (or biome) of microorganisms—bacteria, fungi, archaea and protozoa. This renaissance we envision will include respecting both our internal and external ecosystems, at a microscopic scale with macro implications.

In soil, microbes in the trillions are essential for crop nutrient density, water retention for flood and drought control, soil aeration, decomposition of plant fiber and composting, defense against plant diseases and prevention of soil carbon oxidizing into the atmosphere. Notably, soils rich in microorganisms draw down and sequester the potent greenhouse gases carbon dioxide and nitrous oxide, while also purifying water, supplying plants with macro- and micronutrients, and reducing the need for synthetic fertilizers. To reap all these benefits of healthy soil, we must stop with the poisons. Duh.

In humans, our 30 trillion or so human cells are outnumbered by diverse microorganisms, our “inner soil,” that function throughout our bodies in exchange for food (bacteria in our colons prefer plant fiber!) and shelter. Our microbiome performs a wide range of critical functions, such as bolstering our immune systems, manufacturing vitamins, supporting digestion and protecting against disease. Have you thanked your microbiome today?

As physician and medical communicator Zach Bush, summed it up, “It is time to realize that pesticides are antibiotics themselves—antibiotics that are killing what is left of the good bacteria and biodiverse microbiomes in both our soil and in our physical bodies.”

The key to this microbiome renaissance will be nurturing rather than killing or disrupting the balance of our friendly and essential microbiota. This will require us, humanity, to make organic regenerative farming and gardening the status quo. Regenerative farming means working with, not warring against, nature—planting and saving diverse varieties of heritage seeds, protecting pollinators, growing biodiverse crops that are rotated, using natural fertilizers such as legumes and nitrogen from the atmosphere, recycling organic matter (mulches and composts), multispecies cover cropping and crop rotations to build soil, and grazing (not confining) farm animals. This can be at all scales, including climate victory gardens in yards, local parks, terraces and rooftops.

Additionally, a recent study found that "after only six days on an organic diet, every single person would see significant drops in those pesticides, including several linked to increased risk of autism, cancer, Parkinson’s, infertility, and other significant impacts on health."

Not only is transforming our agriculture to regenerative practices a win for our health and for nature more broadly, it’s also a key climate solution. As we’ve written here previously, we can sequester carbon and improve our nutrition through regenerative farming of land and sea.

However, the microbiome renaissance doesn’t stand a chance unless, for starters, we stop using glyphosate, an antimicrobial ingredient in hundreds of herbicides. Glyphosate has been found in air, rainwater, drinking water, and in groundwater used for crop irrigation. It moves throughout leaves, stems, seeds, roots and soil. It moves through human organs, lymph tissue and blood. It poisons microbiomes. It’s time to boycott biocides, including GMO corn products, for a return to a healthful cornucopia.

This is also a food justice issue, as organics are often more expensive and less available in poor communities and communities of color. Hence the importance of efforts like Friends of the Earth’s Organic For All, and of ending huge farm bill subsidies to corn and other big commodity crops, and instead subsidizing the transition to regenerative practices.

As a 2018 report by 130 worldwide national academies of science and medicine concluded, “The global food system is broken, leaving billions of people underfed or overweight and driving the planet toward climate catastrophe.” It recommended as solutions climate change-resilient crops, smarter crop rotation, soil protection, more precise use of fertilizers and minimizing pesticide use. Precisely.

It is pure hubris to think we can manipulate nature into agricultural perfection with synthetic fertilizers and pesticides. Instead, to adapt to and mitigate the intertwined ecological, human health and climate crises, we must respect the elegant complexity of nature. We must overhaul our food system. And it can all start with the foundation of ensuring that microbiomes flourish.

The views expressed are those of the author(s) and are not necessarily those of Scientific American.