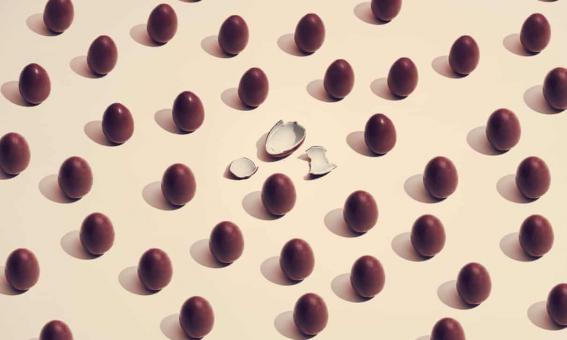 This article originally appeared in The Guardian, on April 9, 2020

Whether they’re hollow or filled with ganache, every Easter egg contains a complex, globalised trade network within it. The cocoa used to make the chocolate was most likely grown in West Africa – around 70% of the world’s supply is.

Once grown, the beans might be sold to a large processor, to be made into butter, powder or liqueur. Though they’re not household names, 60% of the world’s cocoa products are processed by three companies: Barry Callebaut, Cargill and Olam.

From there, the processed cocoa will be sold again – probably to one of five major conglomerates: Mondelez, Mars, Ferrero, Hershey’s or Nestle, who alongside bean-to-bar manufacturer Lindt, produce 80% of the world’s chocolate.

At the very start of this chain, the potential for damaging practices is huge. Since 2001, the use of harmful child labour – a form of modern slavery – on cocoa farms has been an issue known to manufacturers, politicians and the general public. Since 1960, 90% of Ivory Coast’s rainforests, including National Parks, have been lost to deforestation.

The CSIRO estimate the average Australian consumes 32kg of chocolate a year, and in the absence of tight legislation, it’s up to consumers to make informed choices. But the complex supply chains that hide these dirty secrets make it difficult.

This year, three NGOs – Mighty Earth, Be Slavery Free and Green America – have banded together to produce an Easter chocolate guide that helps consumers sort good and bad eggs. The desk review looks at the policies and promises of major chocolate manufacturers and processors, and assigns them scores based on six factors relating to their environmental and labour practices.

In Australia and New Zealand, iconic New Zealand chocolate brand Whittaker’s came out on top, winning a Good Egg Award for their “leadership in policies and practices to end child labour, moving towards a living income for farmers and caring for the environment”.

“And their chocolate tastes fabulous,” says Carolyn Kitto of Be Slavery Free. “They really have earned this score.”

Swiss brand Lindt – who oversee all parts of the chocolate manufacturing process – also scored very highly. “They have the most thorough on-the-ground farmer relationship of the big chocolate companies,” says Be Slavery Free’s Fuzz Kitto.

Be Slavery Free have been investigating labour practices in the chocolate industry for more than two decades; and they have noticed a significant positive change in the last three years.

When they ran a similar assessment in 2012, Carolyn Kitto says you could fit Australian supermarkets’ ethical chocolate offerings “on an A5 page”. “Now there are so many, we have to put it up online to show them all,” adds Fuzz.

The guide only looks at manufacturers large enough to have their own programs, so major Australian chocolate brands like Haigh’s and Darryl Lee were not included in the guide – though both are good options for Australian chocolate buyers. Fuzz notes that after a significant lobbying efforts, in the past year Darryl Lee “have just done a massive turn around in Australia, it’s been a phenomenal thing to watch”.

If you want to buy chocolate not covered in the guide, Carolyn recommends looking for certification from either the Rainforest Alliance, Fair Trade or Barry Callebaut’s Cocoa Horizons for an indication of better labour and environmental policies.

On the other end of the spectrum, luxury American chocolate brand Godiva was slapped with a Rotten Egg Award. Because “they used other people’s programs without being proactively involved in them,” says Fuzz. Carolyn adds: “ They’re basically saying they expect someone else to do the work rather than taking the responsibility themselves.”

Though the recent changes have been promising – particularly major manufacturers’ willingness to show transparency, and engage in a dialogue with consumers – Be Slavery Free says there is still a long way to go in ridding chocolate of its bitter elements. “We are continually saying ‘you’ve got these programs, show us the results’” says Fuzz. “There’s not been an on-the-ground assessment or baseline for us to know what the improvements are. That’s one of the things we’ve been pushing for.”

The organisation is particularly focused on fighting poverty, by ensuring cocoa farmers are paid a living wage. Fuzz explains: “How do we get them a decent price for their cocoa so they don’t have to use their children for labour?

Further regulation, with real consequences for non-compliance, is also a major area for improvement. In Australia, the Modern Slavery Act requires entities with an annual consolidated revenue of more than $100m to “report annually on the risks of modern slavery in their operations and supply chains, and actions to address those risks.” However, Fuzz notes “the difficulty is that ... although it’s mandatory to report, there’s no consequences if you don’t.”

“We wouldn’t regard that we actually have a mandatory regulation scheme, because if there are no consequences, it’s sort of like saying ‘Well you have to pay tax, but if you don’t, we’re not going to worry about it,’ ” Carolyn says.