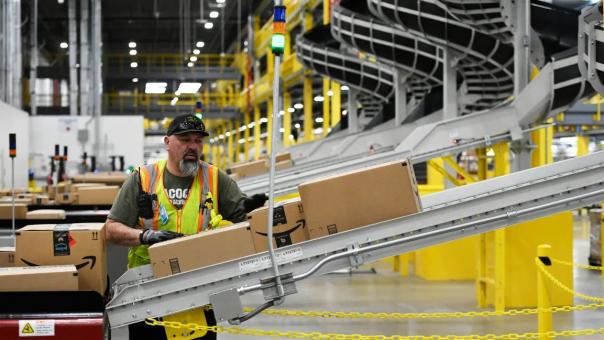 This article originally appeared in Fast Company, on November 26, 2019

It’s official: Amazon is mammoth, at over 750,000 employees, and growing swiftly. Nearly 100,000 workers were hired in the third quarter alone. For comparison, fellow behemoths Google, Apple, and Microsoft all employ 100,000 to 145,000 workers.

Now a resistance is forming. “We are joining together to stop Amazon’s growing, powerful grip over our society and economy,” says the website of Athena, a broad new coalition of activist, pro-labor, and social-justice groups aimed at ensuring that “no corporation is above the law or too big to govern.”

Their concerns are backed by the release of a new report from the Economic Roundtable, which is coincidentally titled “Too Big To Govern.” It outlines Amazon’s many negative impacts on communities, workers, and the environment. For example, every day, 21,5000 diesel truckloads of Amazon goods enter Los Angeles, creating “an estimated $642 million in uncompensated public costs for noise, road wear, accidents and harmful emissions.”

The report calls its warehouse jobs “grueling and high stress” and chastises Amazon for not paying $20 minimum wage along with full health benefits. (Amazon pays $15 minimum wage, and many employees enroll in publicly subsidized health insurance.) “The only benefits that cities are receiving from Amazon’s warehouses are from construction jobs and fees, and employment of residents in low-wage jobs, along with modest, trickle-down multiplier effects as they spend their sparse earnings. Cities do not receive sales tax revenue from the sale of goods in these warehouses.”

An Amazon spokeswoman called detractors like Athena “self-interested critics” and “unions and groups funded by our competitors that have a vested interest in spreading misinformation about Amazon.” She highlighted the 400,000 U.S. jobs Amazon has created over eight years, an upcoming $700 million investment in upskilling 100,000 employees, and the launch of The Climate Pledge to reach net zero carbon by 2040.

“Amazon is a force for good in communities where we operate,” she said in an email. “It’s no coincidence to us that this group would emerge now, because large shopping events have become an opportunity for our critics, including unions, to raise awareness for their cause—in this case, increased membership dues. These groups are conjuring misinformation to work in their favor, when in fact we already offer the things they claim to be able to provide.”

Athena comprises four dozen organizations, including Green America, the Partnership for Working Families, the Transit Riders Union, and New York Communities for Change. If you’re curious about the group’s efforts, you can signup for the Athena email list here.