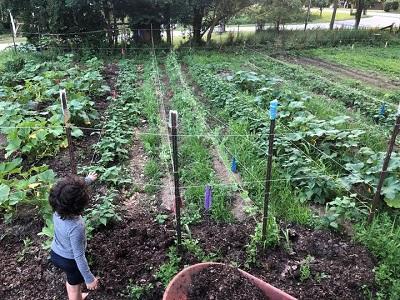 This article originally appeared in Huffington Post, on February 6, 2020

Right across from Atholton High School in Columbia, Maryland, sits a garden roughly a third of an acre with rows of vegetable beds and a newly added pond to encourage wildlife. The garden, located along the road so it’s the first thing people see when they drive past, is being managed mostly by students who planted their first perennial seeds to support pollinators last fall and are now eagerly waiting to see what springs up.

It is part of a 6.4-acre plot of farmland bought last June by the Community Ecology Institute, a nonprofit that seeks to reunite people with nature, from a retiring organic farmer who had managed it since the 1980s and didn’t want it to be lost to development. Fifty years ago, the entire area was agricultural land. Today, this plot is the only farm left. And one of the first things the Community Ecology Institute did when it took over the farm was to plant this “climate victory garden.”

The nonprofit is one of over 2,000 organizations and individuals across the country growing food in climate victory gardens ― be it on a balcony or in a backyard, a community garden or larger urban farm project ― in a bid to mitigate the climate crisis.

Climate change is “a tremendous crisis, but it’s also a really amazing opportunity to shift the way that we’ve been doing things that no longer work,” said Chiara D’Amore, the Community Ecology Institute’s executive director. “We want to use the entire farm as a way to teach about climate action… and we see land-based climate action as one of the more tangible, gratifying ways to help people feel like there’s some hope, feel like there’s something they can do.”

The climate victory garden movement was launched by nonprofit Green American two years ago. It is inspired by the estimated 20 million victory gardens planted across the U.S. by the end of World War II, responsible for producing 40% of all vegetables consumed in the country at the time. The environmental nonprofit is calling on people to use whatever outdoor space they have to grow fruits and vegetables, using “regenerative” methods to help tackle agriculture’s carbon footprint.

About a third of the world’s greenhouse gas emissions come from food production ― that includes emissions related to storing, transporting and selling food. However, the main climate contribution comes from growing crops and livestock and the effect of deforestation to create more cropland. In the U.S., the agriculture sector accounts for roughly 9% of the country’s annual greenhouse gas emissions. Industrial agriculture can also contribute to water pollution from fertilizer runoff and a loss in biodiversity.

Individual gardening efforts alone aren’t enough to address these issues, but it’s a start. “Certainly the victory garden didn’t solve the problem, it didn’t win the war, but it was something people could be called on to do to feel like they were a part of the solution and doing something that was a benefit,” reflected D’Amore, who said the same goes for the climate crisis today.

Many of the goals of the victory garden in the 20th century are echoed in the modern environmental movement.

Herbert Hoover, head of the U.S. Food Administration during World War I, encouraged Americans to live simply, grow their own food and consume less. The Federal Bureau of Education also launched the U.S. School Garden Army, which enrolled 2.5 million children in 1919. Those school gardens are credited with helping produce food worth $48 million at the time. Thanks to efforts like these, the U.S. successfully avoided having to ration during that war.

During World War II, citizens were once again encouraged to grow everything from potatoes to peach trees, and many women, as part of the Women’s Land Army, stepped in to manage urban victory gardens and rural farms. In 1943, first lady Eleanore Roosevelt planted a victory garden on the front lawn of the White House in an effort to show that anyone could successfully grow food.

Soy was promoted as an alternative protein to meat ― although more because meat was being rationed to feed the military rather than over environmental concerns. Soybeans were marketed as “wonder” or “miracle” beans that were easier to grow and store than meat. Canning, drying and preserving were also encouraged to help foods last longer.

The difference now, though, is that Green America hopes to harness this same spirit through the potential of what’s known as “regenerative agriculture” ― a way of farming that’s dedicated to enriching the soil while also producing healthful food, with the added benefit of storing carbon in the ground. As the government’s 2018 National Climate Assessment, along with many other scientists, acknowledges, “agriculture is one of the few sectors with the potential for significant increases in carbon sequestration to offset [greenhouse gas] emissions.”

The challenge, however, will be to scale it up. There’s a long way to go before reaching wartime levels, but Green America hopes to more than double the number of climate victory gardens this year to 5,000.

The term “regenerative agriculture” was coined in the 1980s by Robert Rodale, son of the man who applied the term “organic” to food. The most important idea behind regenerative farming (or “carbon farming”) is soil health. This means relying far less on fertilizers and chemicals and focusing more on methods like planting cover crops, applying compost to build up nutrients in the soil and make it more fertile, and not tilling.

Tilling ― breaking up the soil’s surface ― is used to fight weeds and prepare soil for growing. But it reduces the soil’s structural integrity, meaning it won’t hold as much water and will erode more easily ― two qualities of increasing importance as climate change brings extreme weather, such as the devastating floods the Midwest experienced last year.

Tilling also releases carbon that has been locked into the earth throughout the plant’s life cycle. The more carbon-rich the soil becomes, the better plants grow.

Prioritizing soil health is what differentiates climate victory gardens from organic or wildlife gardens, D’Amore said. “Starting from that literally ground-up perspective, we need to make sure that the soil is really healthy to be mindful of what we’re growing,” she said, describing roots as a “whole underground infrastructure” that helps sequester carbon. In practice, this means finding some edible perennial plants with deep roots, such as currant bushes, which her farm will be growing along with other berries.

Meanwhile, cover crops ― like clover, turnips, barley and spinach ― help keep the soil in place and act as a protective blanket in winter.

“If a farmer is practicing regenerative agriculture on his or her land, the soil is getting improved over time. It’s going to get healthier,” said Jeff Tkach, chief impact officer at the Rodale Institute, an educational nonprofit that researches and promotes regenerative organic farming. “If the soil is improving, well, then the food that the farmer is producing is going to become more nutrient-dense over time. And if those consuming that food are eating more nutrient-dense food, then they’re going to get healthier over time… and the community’s going to thrive.”

A healthy community is at the heart of BLISS Meadows, a climate victory garden that launched last March in Baltimore. The urban farm is run by Backyard Basecamp, an organization that seeks to connect communities of color with nature.

It’s founder and executive director, Atiya Wells, is a nurse practitioner by trade, and her approach is to promote the health benefits of having a local green space and of growing your own food. The community garden is in the process of renovating a vacant home next door to the farm and plans to transform it into a community kitchen that will host cooking classes and tastings, Wells said, “to show people we can eat healthier and it can be delicious.”

But it’s also about community resilience. “When we all think about climate change and what’s going to happen, we know that people who have means can just pick up and go, and the rest of us are going to be here,” Wells said. The BLISS Meadows garden is in a predominantly black and brown neighborhood.

“So this is kind of us really starting things so that when that time comes, we already have a self-sustaining neighborhood where we’re growing food for our neighbors,” she explained, “[and] we’re able to continue to survive.”

Many who support the regenerative agriculture movement see it as a clear, easy climate win with enormous potential. Some, including Green America, go so far as to claim we can “reverse” climate change by simply changing how we farm.

However, as David Montgomery, a geologist at the University of Washington and author of two books on dirt and soil, told Civil Eats last October, regenerative agriculture should be seen as a “good down-payment on reducing atmospheric carbon dioxide” as opposed to a panacea. Claims that it can reverse climate change, he said, are a stretch.

The hope is that climate victory gardens will nudge us toward climate action. But how can something as seemingly small as one person growing tomatoes in their backyard help tackle a problem as immense as agriculture’s effect on climate?

“Everything starts with incremental change,” Semaan said. It begins with reconnecting people to their food and how it got to their plates.

Working with high school students in the Maryland area, the Community Ecology Institute plans to help set up a youth-led program to encourage others to start climate victory gardens throughout the community. “I think our youth get it in a way that many of our leaders and older generations, in general, don’t,” D’Amore said. “They see climate change as the crisis it is. It’s going to impact all our lives, and they want to feel like they can do something that matters.”

Every item grown at home also means one less thing purchased from the store, cutting down on transportation. Even if it’s just a patch of chives, Semaan said, each gardener knows the resources, from water to gas money, that are saved with those plants. “It’s all incremental change,” she said, “and the more people who do it, even if it’s just herbs on a windowsill, the better the planet is for it.”

Tkach agreed. He views the climate victory gardens as a way to “shift people’s consciousness by getting people to just take some kind of action in their own backyards.”

By growing your own food, you have a better understanding of what goes into it, he echoed. “I think as consumers become more attuned to that, it’s going to influence their own decisions,” so people might pay closer attention to food labels that tell you how and where something was grown. “When they go to the grocery store, they’re going to be more adept at [knowing] what to look for.”

Eventually, if enough people are doing this, they can help shift society toward a tipping point, where consumer demand for regenerative farming disrupts the conventional system, Tkach explained.

“I feel like it’s our moment in history. If we could just continue to change the way people eat, it changes everything.”