Farms That Harvest the Sun—Twice

In a greenhouse in Santa Cruz, CA, tomatoes are bright red, lemons look a little orange, and green basil has a definite pink glow. This isn’t a genetic modification project, but it is a science experiment. These plants are growing in the tinted light of a greenhouse made of magenta solar panels. The techniques the gardeners use to grow their produce also help regenerate the soil beneath.

This structure is just one example of dual-use farming, a growing practice of incorporating solar-energy collection and regenerative farming or gardening in the same places. This practice will combat climate change on multiple fronts: water, soil, and energy, allowing the same patch of land to provide clean energy and more food to feed a growing population, while the healthier soil is able to hold more water and sequester more carbon than chemically farmed soil.

Solar Above, Soil Below

In Bluffton, GA, Will Harris has been regeneratively farming his White Oak Pastures ranch since 1995 (see p. 16). He’s one of the farmers who has been teaching others how to achieve his success with regenerative agriculture through our Carbon Farming Network, part of Green America’s Center for Sustainability Solutions. And, he’s currently in talks to be a land manager for Silicon Ranch, a solar company that just bought up 2,000 acres of land abutting his 3,200-acre farm. 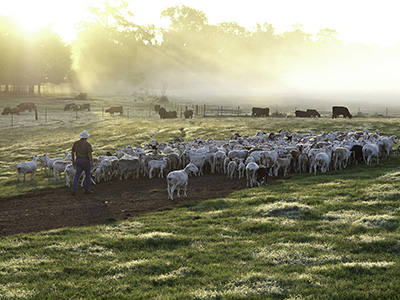 Will Harris with some of his animals in a pasture at White Oak Pastures in Bluffton, GA. Photo by Angie Mosier.

Through the arrangement, Silicon Ranch will pay Harris to manage the land under and around their solar panels (about 800 acres under, and 1,200 around) using his regenerative practices, which include laying down compost; planting diverse species like legumes and grasses; and grazing his animals: cows, goats, sheep, chickens, turkeys, pigs,  ducks, guinea fowls, and rabbits.

Solar companies typically tear up and level the ground underneath arrays in the process of installing solar panels, and once they’ve finished construction, they limit vegetation because they don’t want their panels to be shaded by overgrown grass or trees. Normally, solar farms use chemical pesticides to keep the weeds underneath their panels in check, and they hire landscapers to keep vegetation short.

“The engineering feat of building mechanical panels that will harvest the energy of the sun and send it down a wire to your home is just an act of brilliance by engineers,” Harris says. “But those people cannot be expected to know about the balance and biological science that occur in a well-managed ecosystem. For a [solar engineer], it’s all about building from the ground up with no consideration from the ground down.”

But with Harris’s help, Silicon Ranch’s array in Bluffton will be pesticide-free, and the land underneath the company’s equipment will be put to good use growing food, rather than just sitting fallow. Harris sees collaboration between farmers and solar utilities as a natural partnership that will benefit people, the land, and ecosystems.

When asked what benefit he’ll see with this collaboration, Harris responds that he simply wants to grow the regenerative ecosystem in his region. He explains that his is one of 20 holistically-managed farms certified by The Savory Institute, an organization that works with farms to make the change to regenerative agriculture and then uses those farms as working classrooms for teaching others. He prides himself on making healthier land, raising animals in a way that mimics how they would be in nature, and teaching people about regenerative agriculture.

Harris’s plan is to regenerate the soil under and around Silicon Ranch’s solar panels enough to one day use the space to grow certified organic crops. Since the land where the array will be hasn’t been managed regeneratively before, the White Oaks Pasture team’s first step will be laying down compost and planting a mix of grasses, legumes, and pollinators, which will begin to draw down carbon and attract microorganisms. Once those plants get going, the land can be used for grazing animals. The animals’ droppings will also help the land be restored. Eventually, it will be suitable for growing certified organic vegetables.

“In a healthy ecosystem, you have many cycles going on at one time: carbon cycle, water cycle, energy cycle, mineral cycle, microbial cycles,” Harris explains. “Under a normal solar-voltaic array, those cycles would be broken—the effort is to limit the vegetation; no care has been given to keep the cycles cycling. When the cycles are operating properly, they pull carbon and other greenhouse gases into the soil through photosynthesis, and it’s sequestered there.”

Silicon Ranch and White Oak Pasture’s dual-use space is projected to be online in the next several years.

In the magenta greenhouse on campus at University of California–Santa Cruz (UCSC), professor and plant physiologist Michael Loik and his lab is running tests to see just how well hothouse plants can grow under solar panels. The lab workers use regenerative growing techniques.

Loik got started on his project after his colleagues Sue Carter and Glenn Alers developed the magenta solar panels. Unlike conventional panels, these Wavelength-Selective Photovoltaic (WSPV) systems let sunlight on certain parts of the visible light spectrum pass through, while collecting green- and blue-colored wavelengths to generate energy. The pair asked Loik to test the impact of growing plants under the WSPV systems. 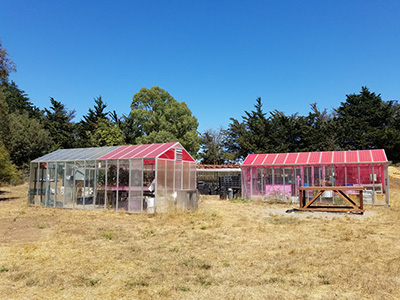 The pink glass of the greenhouses at the University of California–Santa Cruz allow sunlight in and perform double duty as energy-generating solar panels. Photo courtesy of Michael Loik.

Greenhouses currently cover 9 million acres on Earth, which means the WSPV technology could mitigate reliance on dirty energy to power the agriculture industry. If the world doesn’t work quickly to restore soils, desertification and degradation may make less land available in the future for agricultural purposes, which may mean an increased reliance on greenhouse-grown foods.

What the lab found was that its 20 varieties of tomatoes, along with cucumbers, lemons, limes, peppers, strawberries, and basil, thrived (and without pesticides) under the pink roof panels. The plants all grew just as quickly and well in this less bright, cooler setting, and tomatoes ended up using five percent less water than they would in a typical clear greenhouse. Because of the relative shade of the greenhouse, water stays in the soil longer before evaporating, which accounts for that change.

But dual-use farming doesn’t always look like growing plants in a magenta greenhouse. In fact, it rarely looks like that. More often, it looks like the setup that Greg Barron-Gafford works on at University of Arizona in Tuscon, and at Biosphere 2 in Oracle, AZ.

A 2016 study from University of Maryland and University of Arizona shows that large solar farms tend to store heat, both in the panels themselves and by trapping hot air under them. Arizonans, Barron-Gafford found, were particularly concerned about how solar farms might heat up their already sweltering communities. He explained that land being sited for new solar arrays was often in historically agricultural communities, and families were hesitant to let the industry in if it meant abandoning their farming heritage and heating up their region.

Those ideas inspired a project at the University of Arizona called “agri-voltaics,” a term that combines the words agriculture and photovoltaics.

“We wondered if you could co-locate agricultural production and solar installations. Could you allow for this green energy source, but allow for the agricultural lifestyle to stay within the community?” Barron-Gafford says.

To find answers to these questions,  Ph.D. students, undergrads, and professors got to work planting on 60-foot by 30-foot plots (about the size of a community garden), which they’d located both under solar arrays and in regular sunny conditions. It was important that they set up the voltaics to a height where tractors could drive underneath, making the plots below usable on a large scale, so the panels are set up 15 feet off the ground.

He goes on to explain that on the plots they test, they use several regenerative farming techniques: people power, compost, no chemical inputs, and a diversity of plants species to grow an understory that attracts pollinators and deters herbivores.

“Beyond making more use of our lands, reducing irrigation use due to lower evaporation rates [thanks to the shade the panels provide], and boosting renewable energy production, our dual-use or ‘solar sharing’ approach speaks to multiple core principles of regenerative farming.”

The garden plots in Arizona grow ingredients for salsa—tomatoes, peppers, cilantro, and onions. Like Loik’s lab, Barron-Gafford kept looking for the downsides to the project but found none.

He found that when vegetation was present under solar panels, the warming effect Arizonans were so worried about disappeared. With a garden below, conditions under the panels are much cooler, partially because of the shade, and partially because of the way plants “sweat” and create moisture in the process of transpiration. The cooler temperature under the panels causes evaporation to slow by about 50 percent, which means the team can water the plants every other day instead of once a day, as they’d have to do in the sun.

Barron-Gafford’s lab’s preliminary research shows the significant cooling benefits workers (or livestock, should they be present) as well, as tests have recorded skin temperatures up to 20°F cooler under the array. In addition, though the panels cut back the gardens’ sunlight exposure by half, doing so has only cut the plants’ maximum potential by ten percent.

And like the work on Harris’s farm, planting crops underneath these solar panels gives life in a place that would typically have none, especially in the region Barron-Gafford is working in, where people are having to choose between holding onto less productive agricultural land and a steady income from a solar utility that might be interested. Like Harris, they can have both.

These instances of dual-use, regenerative spaces do not stand alone. At research universities from Minnesota to Massachusetts, California to Germany, studies are showing that not only does solar energy not hinder plants, but the two can often have a symbiotic relationship. Studies are also being done with livestock, testing how sheep and chickens can coexist with renewable-energy generation, and holistic farmers like Will Harris are putting those ideas into practice.

“Every little wedge we can put into societies’ use of energy that reduces how much we rely on burning coal or oil to generate electricity, then all the better,” Loik says. “Some of the work that we’re doing is developing these wedges—little technological things to reduce our greenhouses gases.” 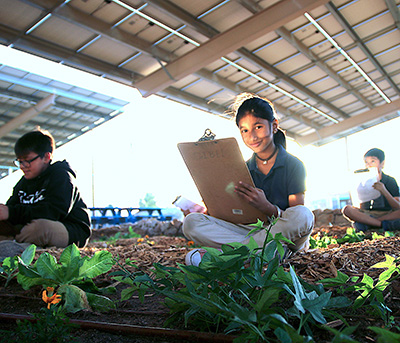 The University of Arizona has replicated the agri-voltatics project at two local elementary schools, where kids are involved in planting, collecting data about the growing plants, harvesting, and selling their goods at a bi-weekly farmer’s market to benefit the gardening program. Barron-Gafford said last season, the kids harvested so much basil that they worked with the school’s kitchen to make and sell seven gallons of pesto that was “solar-shaded and kid-powered.”

“Part of what makes it fun for me is not only making new discoveries but working with kids who are so excitable and interested,” he says. “They understand what kind of future they’re going into. They hear about climate change and drought enough living around here. They see this as playing their part to fix it.”