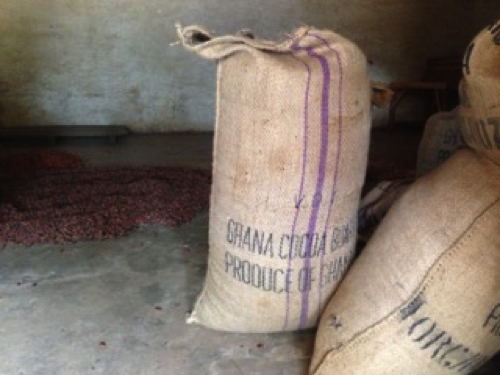 Five years ago, if you wanted to buy an organic chocolate bar, you would have had a hard time finding one with cocoa from anywhere in West Africa. Despite the fact that the region is the largest producer of cocoa in the world, providing raw cocoa to companies like Hershey, Mars and Cadbury, it simply did not have organic certified cocoa farms. In Ghana, for example, which supplies roughly 30% of the world’s cocoa, the government long reserved the right to apply pesticides on all cocoa farms in the country to prevent plant diseases they feared could threaten the entire harvest. And, while fair trade production—which limits the use of certain chemicals—launched in Ghana in 1995, organic was still an impossibility for almost two decades.

Recently, however, things have started to change, and several industrious Ghanaian farmers are producing some of the first organic certified cocoa in in the country. Late last year I had the chance to visit Ghana for a series of meetings focused on boosting farmer incomes—an issue we’ve advocated for at Green America for years. At the meetings I was able to meet dozens of cocoa farmers from throughout West Africa. Many of these men and women had produced cocoa their whole lives, and came from long lines of cocoa farmers—so they were experts. 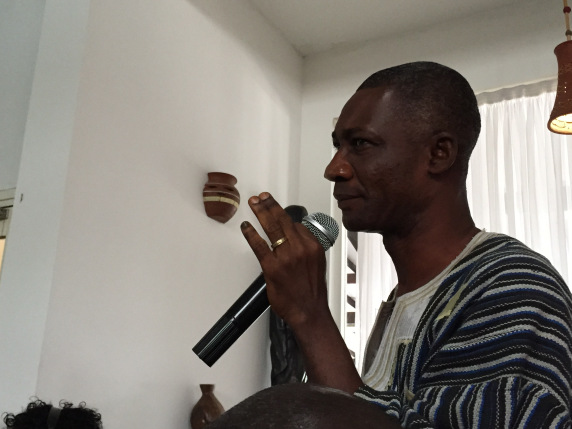 Francis Otu is one of the farmers I met. Francis has been cocoa farming for a long time, but started using organic methods in 2006. He is a member of Cocoa Organic Farmers Association (COFA). Located in the Brong Densuso area of Ghana’s Eastern Region, COFA is the first organization producing organic cocoa in Ghana. COFA has four communities (clusters of farms) owned by over 600 different members. Even though Francis started using organic insect repellents in 2006, such as neem, it was not until more recently the government blocked off COFA’s communities from regular pesticide treatments. Combined, members of COFA own 1250 acres of land, which equates to roughly 950 football fields that are no longer being treated with chemicals. 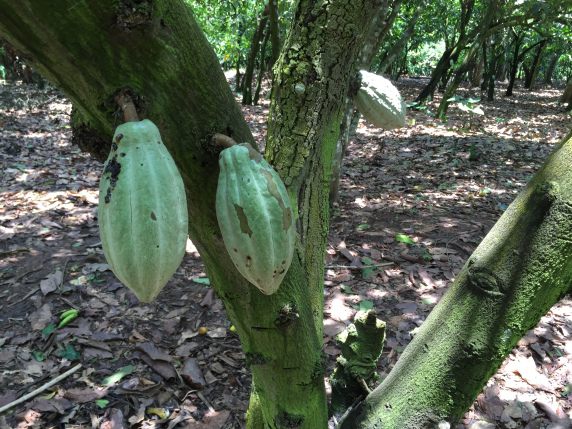 Cocoa farming, organic or not, is intense work. Unlike large-scale farms here in the United States that sprawl for acres and rely on machines, cocoa farms are typically are very small, just 3 to 5 acres, and must be harvested by hand. At first glance, the farms don’t seem like farms at all, but forests. On the farm I visited during my visit, the cocoa trees were well spread out; their branches created a cool and quiet canopy for all of us standing below, and the ground was covered in dead leaves. These leaves, which I initially imagined had fallen randomly, were actually part of the farmers’ pest-prevention measures, staving off weeds from growing in the ground.

Francis is passionate about organic farming and using no synthetic chemicals. When I asked why, he stated, “because it is healthier for me, as the farmer, for my land, and for the consumers in Europe who buy my cocoa.” After the three year transition period required to obtain organic certification, he can also make more money. “It’s very difficult to make a living as a cocoa farmer, but as an organic farmer it’s a little better. I make a premium of 20 cedi per bag I sell.” (roughly $5). 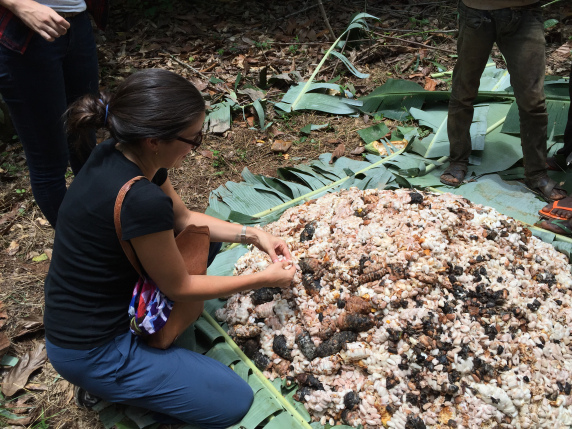 Cocoa pricing is always a little confusing. In Ghana, COCOBOD, the government’s central cocoa marketing branch, sets the price of cocoa each year. For this growing season, the price was increased to 420 GH¢ per 64kg bag, or $105. Francis and his peers then earn $110 per bag. From conversations I had with several of the farmers attending the conference, it seems 1 acre of land can yield about 4 bags per year, which for most farming families would equate to only $1680 annually. The Cocoa Barometer found that most cocoa farmers in Ghana and their children live on just $0.86 per day, well below the global poverty line of $1.25/day. Child labor, a symptom of extreme poverty, has been a known problem in West African cocoa fields for more than a decade. In a 2015 survey, Tulane University, commissioned by the US Department of Labor, found that more than 2 million children in Ghana and Cote D’Ivoire work in hazardous conditions growing cocoa, such as burning fields, applying agrochemicals, carrying heavy loads, and not attending school. 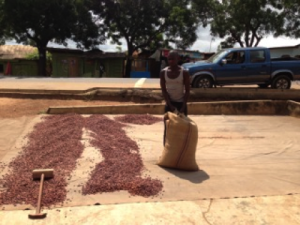 After the cocoa pods are picked, and the beans inside fermented, they are laid out to dry in the sun.

While organic certified cocoa does command a higher price than conventional, if there is no buyer interested in organic, the cocoa will be sold as conventional. Francis explained that though he started using organic methods nearly a decade ago, earning certification and finding buyers took many years. Right now, COFA sells its cocoa to a Swiss chocolate manufacturer, but still has no US buyers. When I asked what would help Francis and his peers most he said, “more direct relationships with buyers so that we can make long-term investments in our farms and maintain quality.”

Globally, organic cocoa production is still a minute portion of all cocoa sold. The ICCO estimates that just 15,000 tons of more than 300 million tons is grown under organic conditions, or .05%. And less than 30% of this cocoa comes from West Africa, according to the FAO. However, the emergence of organic cocoa in Ghana could not come at a better a time. Consumer demand for organic products is growing at a strong pace, cocoa included. According to Euromonitor International, global organic chocolate sales were estimated to have nearly doubled from $171 million in 2002 to $304 million in 2005. 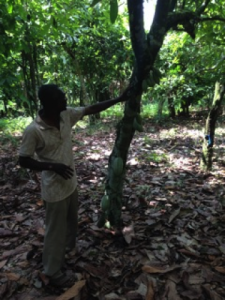 Francis pointing out one of his cocoa trees.

The purpose for my visit to Ghana was to learn from farmers what challenges they face and what it would take to make cocoa farming a long-term, profitable livelihood for farmers. Cocoa farmers throughout West Africa live in extreme poverty—malnutrition, remote homes, no access to schools, and no regular income–despite the world’s voracious consumption of chocolate. At the meetings, Francis declared to all of us that “just like a cocoa tree needs nutrients like water and sunlight to survive, so too do cocoa farmers. If cocoa farmers can not earn a decent income for their work, there will be no chocolate.” For our part as consumers, we have a delicious job to do—buy and eat more organic and fair trade certified cocoa, to support all the men and women who pick each and every pod.

Check out our Chocolate Scorecard to find organic and fair trade chocolates, and to find out which companies are lagging behind.

Back to the Food Labels Guide