From Slash and Burn to Regeneration in Ghana

By
Green America and Grow Ahead

Dr. Kofi Boa, 63, lives in the town of Toase in Ghana, a country on West Africa’s Gulf of Guinea. When he was a kid, his mother’s cocoa farm burned to the ground because of a poorly managed slash-and-burn on neighboring land. From then on, Boa was interested in fighting the slash-and-burn tactics that many farmers in the region used, and in finding practices that worked better for the long-term health of farms in the community. When he grew up, he studied agronomy at the University of Nebraska, then took his education home, where he started the Centre for No-Till Agriculture (CNTA). Dr. Boa is also a member of the Soil Committee, overseeing the design of our Soil Carbon Initiative standard, a joint project of Green America and The Carbon Underground.

The CNTA was created with support from the Howard G. Buffett Foundation and is supported in its work in the Foase area of Ghana’s Atwima Kwanwoma district by Grow Ahead, a nonprofit and Green America ally that helps bridge the financing gap for small-scale family farmers worldwide as they address the challenge of climate change in their communities. Grow Ahead’s fundraising and revolving loan programs are especially critical for farmer organizations in the developing world, which historically have had limited access to capital for growing their organizations beyond their day-to-day needs.

Here’s Dr. Boa’s story, in his own words, with thanks to Alex Groome at Grow Ahead.

Green American: How did you become interested in farming?

Dr. Kofi Boa: My parents were farmers, and when I was a young child at age six, they had to take me to the farm on weekends and school holidays. Just like all the children in the village, I only knew the school and the farm. I liked the farm because there was always so much to eat and a lot of space to play. This got me interested in farming, and I wished every day was a weekend or holiday.

Today, I am a farmer and educator. I grow a wide variety of food and cash crops, including trees, vegetables, grains, and cover crops. I grow more than ten different crops on six different farms (a total of 25 acres) scattered around my village.

Green American: When did you learn about the importance of soil health and begin farming regeneratively?

Dr. Kofi Boa: My father died when I was ten years old. When I was 12, my mother’s cocoa farm—our family’s main source of income—was burned by a neighboring farmer who had set fire to his field to prepare for planting corn. From that day on, I pledged to fight slash and burn, a method used by farmers to prepare their fields for planting, which gives crops an initial nutrient boost but kills the soil life necessary for sustained, healthy farmlands.

I spoke to elders in the village when I was 12 and learned that, rather than use fire, they used to cut vegetation, leave it on the ground for a year, and then come back to plant crops—especially cocoa—when it had decomposed. This technique was called proka in the local Akan language. I started practicing proka at that age and have adapted it by planting in the mulch immediately after slashing, without the one-year waiting period (which was to allow enough time for the cut vegetation to settle and decompose, so farmers could easily move around to work on the field.) 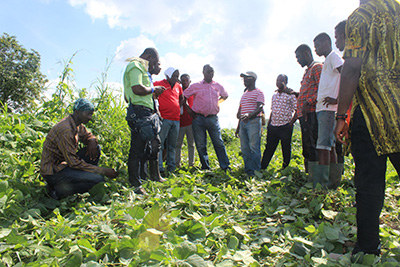 Green American: What inspired you to continue no-till farming for so many years?

Dr. Kofi Boa: Human population has dramatically increased in Sub-Saharan Africa over the past two decades, resulting in increasing demand for food. While the number of people that need to be fed is rising, the arable land area suitable for producing food is declining. This is due to enhanced desertification, flooding, accelerated urbanization, and unfavorable farming practices—especially land preparation methods.

I am inspired by the regenerative power of agriculture to build healthy soils, increase organic matter and nutrient levels, enhance soil life, and improve soil structure to meet rising demands for food.

The practices I use and advocate for allow for continuous and intensive farming in an environmentally friendly and profitable manner, whilst satisfying human needs for food and/or income. This is all possible because of soil health. I believe these practices help balance production, costs, environmental considerations, and economic sustainability.

Green American: What regenerative growing practices do you follow?

Dr. Kofi Boa: Everything I do on my farm is guided by a goal to regenerate the soil:

Green American: Tell us about the Centre for No-Till Agriculture (CNTA) and the outcomes you witness when regenerative agriculture is adopted by the communities you work with.

Dr. Kofi Boa: I founded the CNTA to show the benefits that come from conserving and regenerating the soil. I had been using these farming practices on my farms as an example, where farmers could see results. I began to teach others, and farmers were getting interested, so I started the Centre.

At CNTA, I teach farmers about forest productivity, fallow land (Fallow means land that has been left uncropped for one or more growing seasons.), and how to replicate healthy soil conditions on arable lands using the principles I mentioned earlier. I build farmers’ confidence with interactive and visual evidence on demonstration plots and other farmers’ fields. Once farmers become confident that the approach works, they complete hands-on practical training so they feel comfortable implementing on their own lands.

With healthy, productive soils, farming can be a real business and an assured means of livelihood. Outcomes are visible in the community, with farmers no longer starting bushfires, year-round food security, and the creation of wealth among vibrant youth in rural areas.

Green American: What are the biggest challenges in getting farmers on board?

Dr. Kofi Boa: The benefits of building soil health are slow to come into effect, and no-till practices are not widespread. There is a lack of support and promotion around regenerative agriculture.

Financing is needed for creating additional learning and demonstration plots for farmer training. Farmer-to-farmer extension services (education and mentorship) are very important, but the lack of incentives for getting outstanding smallholder farmers involved continues to hinder the spread of regenerative agriculture. Inadequate inputs and market access is also limiting and slows more widespread adoption of these practices.

Green American: When people are resistant to adopting regenerative practices, what changes their minds?

Dr. Kofi Boa: I work with smallholder farmers who mostly would not have much formal education to be able make meaningful conclusions and inferences from written research results and scientific presentations. The numerous talks and the volumes of published materials available on regenerative agriculture continue to have no impact on this group of people who continue to produce the bulk of food in Africa.

Green American: Do you have a good story about how someone saw benefits and got excited after being skeptical?

Dr. Kofi Boa: I know a man named Kwame Anane in Amanchia, Ghana. When I met Kwame over ten years ago, I realized that he was a hardworking farmer, but he was not getting much yield from his efforts. I talked to him about regenerative agriculture, but he was not in any way prepared to accept me.

He finally agreed to try it on a field that he had been monocropping maize on continuously and was experiencing declining yields. Two years later, Kwame now has several regenerative farms scattered in the village, and he uses his farms to teach other farmers.  Kwame practices no-tillage, crop residue retention, and rotations involving food crops and cover crops. He has experienced a complete change in life and is well-respected in the village. Now he works with me to continue to show regenerative ag to farmers.

One more benefit Kwame saw that motivated him was that he didn’t have to spend so much time and effort to plow and make ridges to plant vegetables such as tomatoes and peppers. He invested the free time to work on his cocoa farm, which had not been receiving that much care for lack of time.

Green American: How can people who aren’t farmers support regenerative agriculture and your work?

Dr. Kofi Boa: Rising consumer demand could trigger more interest in products grown regeneratively, which in turn would drive the recognition and adoption of soil-conserving practices at the farm level. This would greatly support our initiatives at CNTA. Rising consumer demand for these products will have positive impacts on the changing climate, as more environmentally friendly production practices are employed. 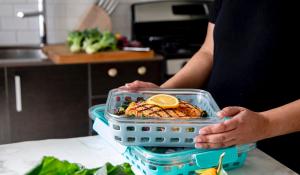 When it comes to eating green, making sure your leftovers don’t go to waste is important. But not all storage containers for those leftovers are created equal. Avoid harmful chemicals entering your food by choosing safer storage and cooking options.