In this new Trump era of deregulation, it’s clear the government isn’t going to look out for the common good or for future generations when it deals with corporations. So responsible shareholders are picking up the slack, standing up to Corporate America on behalf of people and the planet.

In fact, they’ve been using their economic clout to pressure major companies to be more responsible since the 1970s, when they issued the first demands that companies pull out of South Africa to protest the country’s racist apartheid regime.

One of their main weapons is the shareholder resolution, or a 500-word formal request to corporate management. Any shareholder who owns at least $2,000 in company stock for a year or more may put forth a resolution, although the strongest resolutions come from shareholders in coalition, including institutional investors.

“The democratic aspect of the US system, which allows an investor who has only $2,000 worth of the company to force a dialogue with management through shareholder resolutions, is phenomenal,” says Amy Domini, CEO of Domini Social Investments. “As a shareholder, you get a unique kind of access to the people behind the corporation.”

Owning just one share of stock gives you the right to vote on shareholder resolutions—making you a shareholder activist.

The votes aren’t binding, but they do send a powerful message that a company’s stockholders—who are also its customers—want change.

Investor activists have filed 430 shareholder resolutions related to social and environmental responsibility in 2017, according to the 2017 Proxy Preview report (see box, p. 22) from As You Sow, the Sustainable Investments Institute, and Proxy Impact. Many votes were still pending as this guide went to press.

Often, major shareholders or shareholder coalitions will first try dialoguing with a company behind the scenes about their concerns, so a request may never go any farther if the company takes action. If dialogues aren’t successful, shareholders may then resort to crafting a resolution.

If you notice that a particular resolution has been “withdrawn,” that means the company likely agreed behind the scenes to the shareholders’ request. However, in some cases, it may mean that the company successfully filed a “no-action request” with the US Securities and Exchange Commission (SEC) to have the proposal excluded from the proxy ballot.

Interestingly, SRI resolutions don’t have to win a majority vote to make companies take notice—social and environmental resolutions only reached an average high vote of 20.5 percent in 2016.

“When we file a shareholder proposal, we don’t expect huge numbers in any given year,” says Pat Miguel Tomaino, director of socially responsible investing at Zevin Asset Management. “Often, a proposal getting a lower percentage of the vote is sufficient to put an emerging issue on the radar of a ... board. We can point to the fact that, let’s say, 16 percent of shareholders view an issue as a material concern.”

To keep popping up on shareholder ballots year after year—and spurring shareholder discussion and potentially negative publicity for the company—a resolution only needs to earn three percent of the vote its first year on the ballot, six percent the second year, and ten percent thereafter.

In spite of Washington, the business community seems to be on track to reduce greenhouse gas emissions and commit to renewable energy—including “a majority” of Fortune 100 companies, says Michael Passoff, CEO of Proxy Impact.

“Part of this is due to the growing recognition that global warming demands immediate action,” he says. “And part of this is just realizing the financial benefits of being climate-friendly. The Carbon Disclosure Project found that four of five companies earn a higher return on carbon reduction investments than in their overall corporate capital investments, and energy-efficiency investments earned an average 196 percent return on investment.”

For those companies that aren’t climate change leaders, shareholders are putting on the pressure. In 2017, investors have filed more than 80 climate-change proposals. Many ask companies to report on the impacts of climate change to the company bottom lines and their strategies for coping. Others request companies set targets to reduce methane emissions, set goals for and report on renewable energy use, and more.

Ceres is coordinating the majority of climate-related proposals at oil and gas companies like ExxonMobil and Hess, as well as utilities like Dominion Resources and Xcel Energy. And investors filed ten resolutions asking other companies like UPS, CVS, PepsiCo, Lowe’s and SuperValu to report on or set renewable-energy goals.

So far this season, signs point to a sea change in the amount of shareholder pressure companies are getting on this issue. As Trump moved to pull the US out of the Paris Climate Agreement, Exxon shareholders cast an unprecedented vote of 62 percent in favor of a resolution asking the company to report on the long-term portfolio risks of its climate-change policies and technological advances. A similar proposal at Exxon last year earned 38 percent of the vote.

Joining shareholder activists were conventional large-scale investors Blackrock, State Street, and Vanguard, which have historically voted against climate resolutions. Blackrock, along with JPMorganChase, had earlier this year agreed to revisit its approach to climate-related shareholder resolutions after dialogues with Zevin Asset Management, according to Tomaino. Zevin was also a co-filer on the Exxon proposal.

“[The Exxon vote] is a clear signal from the capital markets—investors big and small, sustainable and very, very mainstream—that climate risk is a financial risk, no matter what the US does on the policy front. And that we need to see the biggest emitters, folks with most climate risk, acting on climate risk now,” he says. “This is a clear statement from shareholders that Exxon’s previous action and analysis on climate hasn’t been enough.”
Climate-related shareholder resolutions also garnered record support at other companies. A proposal at Dominion Resources earned 47.8 percent, one at Duke Energy earned 46.4 percent, and one at DTE Energy earned 45 percent.

Led by As You Sow, investors are once again asking several companies to adopt comprehensive recycling policies. A 2017 report from As You Sow calls for the replacement of polystyrene packaging as it’s not recyclable, is a possible human carcinogen, and is clogging up ocean waters and choking wildlife. While the government isn’t taking action on this toxic plastic, 15 major brands—including Coca-Cola, L’Oreal, Dow Chemical, Danone, Mars, PepsiCo, and Procter & Gamble—have endorsed the report.

Meanwhile, As You Sow is the lead filer on resolutions asking laggards Amazon, McDonald’s, and Target to phase out polystyrene packaging, and it’s also filed proposals at Kroger, Kraft Heinz, and Mondelez requesting information on their use of non-recyclable packaging.

The resolutions at Amazon and Target were withdrawn after both companies agreed to address the issue.
The polystyrene resolution at McDonald’s earned 32 percent support. The packaging resolution earned 13 percent of the vote at Kraft and 27 percent at Mondelez. It’s still pending at Kroger as of press-time. All of these votes are more than enough to guarantee the resolutions will return on next year’s proxy ballot.

Meanwhile, shareholders are pressing companies to close the gender wage gap. Thanks in large part to investor pressure, more than 100 companies have signed the Obama administration’s White House Equal Pay Pledge. And seven of the nine tech companies that had equal pay shareholder resolutions on their ballots in 2016—including Apple, Intel, Expedia, Amazon, Microsoft, and eBay—did not see similar resolutions on this year’s ballots, as they have made commitments to publicly disclose and close their gender-based wage gaps.

Pax World is filing equal pay resolutions with several companies. So far this season, Goldman Sachs, Bank of New York Mellon, Verizon, AT&T, and Qualcomm have agreed to “enhance their pay equity disclosure practices.”
A resolution from Zevin  asked Colgate-Palmolive and at TJX to identify and reduce pay inequities based on race, gender, or ethnicity. Zevin withdrew the resolution at Colgate when it agreed to take “material steps in the right direction.” The TJX resolution earned 16 percent of the vote and will be back next year.

As the White House continues to hire a preponderance of white men in key government positions, shareholders are zeroing in on diversity issues.

Trillium Asset Management is the key filer in most of the 12 proposals filed asking companies like AFLAC, T.Rowe Price Group, Visa, and Amazon to report on diversity and Affirmative-Action efforts.

After being pressed on diversity issues for years by shareholders, 150 companies had joined the CEO Action for Diversity and Inclusion as this guide went to press, committing to fostering more open discussions about race and gender in the workplace.

Shareholders have a long history of pushing for LGBTQ anti-discrimination. Prior to last year’s election, many, including Heidi Walsh of the Sustainable Investments Institute, thought that battle was largely won, as a majority of S&P 500 companies have LGBTQ-friendly policies.
“Alas, not so fast. We’ve seen some worrying trends,” says Walsh. “This year, we saw ... the transgender discrimination law in North Carolina. And disquieting questions have arisen about how companies will respond to a slate of ‘religious liberty laws’ that are starting to crop up around the country.”
Religious liberty laws would make it legal to discriminate against the LGBTQ community for “religious reasons.”
Walden Asset Management, Trillium Asset Management, and NorthStar Asset Management have separately filed nine resolutions asking companies to adopt gender identity and sexual orientation anti-bias policies. So far this year, Dentsply, EOG, and Verisk Analysis, and Johnson Outdoors have agreed to update their LGBTQ anti-discrimination policies.

In addition, “investors, coordinated by Trillium and the New York City Comptroller, called on North Carolina state officials to reject their state’s current wave of anti-LGBTQ legislation,” according to Proxy Preview. A similar effort about pending Texas legislation is in the works.

You Can Invest in Change: Pick an Issue
Vote with Your Investments for a Better World
Does Social Investing Affect Performance?
Socially Responsible Investing at Every Age
How Karen and Joe Greened Their Investments
Anatomy of a Proxy Ballot
Divestment: A Powerful Tool for Change
Break Up with Your Megabank in 10 Easy Steps
Five Cool (and Free) Tools for Financial Wellness
Shareholders Take Action
Learn about our sponsor.

Our path forward together on climate and race
(November 9, 2020)

Thank you to everyone who voted in last week’s election, and a big thanks to all who worked the polls or helped to get out the vote.

Together with our members, we’re getting the largest companies on the planet to change the way they do business for the better—sourcing clean energy, engaging in agriculture that protects the soil and sequesters carbon, and ending practices that harm workers, communities, and consumers. 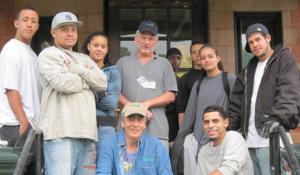 Launched in April of 2010, Energía, LLC is bringing energy efficiency to western Massachusetts.