When I was teaching English in a low-income rural community in southern Louisiana over 20 years ago, I had a short conversation with a mentor teacher that would stay with me. I was lamenting how a particular teenage boy in my class had a real knack for writing but was prone to rather shocking outbursts of temper, prompting random refusals to do his work or engage in class discussions. What could I do to help him settle down?

“I don’t know if you can,” my colleague answered. “There’s a lot of lead in the water that I think causes that.”

I would also discover that the community where I taught and lived sat in the middle of Louisiana’s infamous “Cancer Alley,” an area stretching from New Orleans through Baton Rouge and upward along the Mississippi that’s riddled with polluting oil refineries and other industrial facilities. It also happens to have a higher-than-average incidence of cancer. It won’t surprise environmental justice advocates to learn that Cancer Alley’s population is largely Black, since numerous studies have shown that communities of color, regardless of economic status, are most often targeted by toxic facilities.

Fast forward to 2014. Most Americans are aware of what happened in Flint, MI, in recent years. The short version is the same story: “lead in the water.” But magnified.

In April of 2014, the city of Flint switched its drinking water source from Lake Huron via Detroit to the Flint River as a cost-saving measure. Problem was, the Flint River’s water is highly corrosive, due to both natural causes and heavy industrial pollution from lumber, paper, and chemical plants along the river. So the city was required by federal law to treat that water before it entered the city water system, to prevent it from damaging Flint’s aging lead pipes.

The city did not. 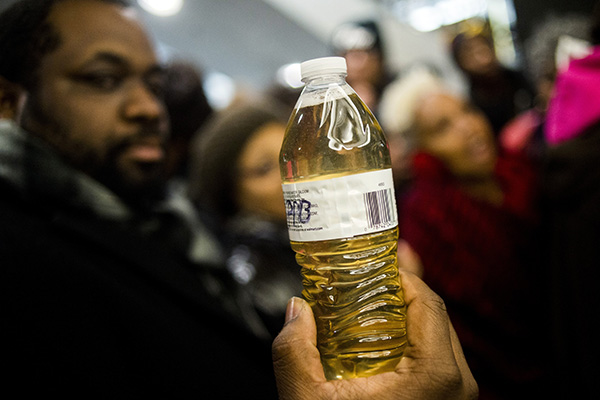 After tests found local lead levels coming into Flint water to be 900 times the EPA limits, residents realized they had a public health crisis on their hands. More than 100,000 people, including thousands of children, were exposed to lead, a potent neurotoxicant linked to developmental harm, brain and kidney damage, high blood pressure, and miscarriage. The water is also suspected to have led to a local spike in a bacteria-borne lung infection called Legionnaire’s disease, killing ten people.

It would take three years for the government to help, and only after citizens, with assistance from lawyers at the National Resources Defense Council (NRDC), successfully sued the city of Flint and the Michigan state government. In March of this year, three years after the city first switched its water source and 14 months after residents first filed their lawsuit, those governments finally agreed to swap out Flint’s lead water pipes and install a transparent lead-monitoring system.

Anjali Waikar, an NRDC lawyer who worked on the Flint case, says that Flint never would have achieved these victories without community action: “But for the dogged resilience of Flint residents who refused to be silenced, Flint’s lead crisis would not have made national headlines. That relentless activism is what is leading the community on its way toward recovery,” she says.

Unfortunately, Flint isn’t an isolated case. Although Congress banned new lead water pipes in 1986, the New York Times reports that “between 3.3 million and 10 million older ones remain” in the US.

Experts and scientists agree that most of America’s tap-water systems are safe, according to the New York Times. But at the end of 2016, Reuters published its examination of lead-testing results from across the country. It found more than 3,000 communities “with recently recorded lead poisoning rates at least double those in Flint during the peak of that city’s contamination crisis. And more than 1,100 of these communities had a rate of elevated blood tests at least four times higher.”

Also in 2016, the Environmental Working Group (EWG) found dangerous levels of chromium-6 in the water supplies that serve 218 million Americans. Chromium-6 is a recognized carcinogen made famous in the 2000 film Erin Brockovich.

As this issue went to press, EWG released a new report stating that its researchers had found levels of 1, 4-dioxane, a recognized carcinogen, in the tap water of nearly 7 million Americans in 27 states, at levels above EPA suggested health limits.

Add in environmental pollution, and it’s clear that tap water in America, perhaps even in your home, may be toxic, says Bill Walker, an EWG managing editor who co-authored the chromium-6 report.

“Americans are exposed to dozens if not hundreds of other cancer-causing chemicals every day in their drinking water, their consumer products, and their foods,” Walker said in a statement. “And what the best science of the last decade tells us is that these chemicals acting in combination with each other can be more dangerous than exposure to a single chemical.”

Federal water protections are in grave danger under Trump. In July, he rolled back rules forbidding companies from dumping debris from mountaintop-removal mining into streams, and his head of the EPA is trying to roll back a 2015 rule that expanded the reach of the Clean Water Act to protect streams and creeks.

In the absence of federal action, it’s communities—like Flint—that will need to work to ensure clean water for all.

Pipes Aren’t the Only Pollution Source

Toxins in US tap water are also likely to come from water pollution at the source—largely from agricultural run-off, fossil fuels, and industrial pollution.

Agriculture: Chemical fertilizers and animal manure are the primary sources of nutrient pollution from American farms, which often make their way into streams, lakes, rivers, and to the ocean, according to the EPA. This type of run-off can cause harmful algae blooms, which are triggered by a type of bacteria that feeds off of the nitrogen and phosphorous in fertilizers.
Algal blooms create dead zones, or areas in water bodies that lack oxygen, so life cannot survive in them. In August, the National Oceanic and Atmospheric Administration (NOAA) announced that this year’s dead zone in the Gulf of Mexico is the largest ever recorded, at 8,776 square miles, an area the size of New Jersey. NOAA points to agricultural run-off and land development along the Mississippi River as the prime causes.

Some algal blooms are poisonous, since they’re caused by a toxic strain of bacteria that can kill fish and kill the animals that eat those fish. They can also adversely impact drinking water, causing rashes, vomiting, headaches, and eye and respiratory irritation.

In addition, high pesticide use on farms is contaminating groundwater, according to the US Geological Survey. The agency notes that around half of the US population gets its drinking water from groundwater sources, calling pesticide contamination of groundwater a topic of “national concern.”

And the ag industry’s prolific use of genetically modified organisms (GMOs) is partially to blame for high water-pollution levels. A 2010 report from The Organic Center showed that, based on US Department of Agriculture data, GM crops have increased overall herbicide use—including Monsanto’s Roundup weedkiller—by 383 million pounds since 1996.

“Pesticide use isn’t just directly contaminating groundwater. It is also a major contributor to the overuse of groundwater within the production of GM crops,” says Anna Meyer, Green America’s food campaign’s manager. “The continued use of pesticides has resulted in loss of soil health and its ability to absorb water, resulting in the overuse of this precious resource.”

All of this runoff pollution has an economic cost, as well. Algal blooms affect coastal tourism, and NOAA notes that every year, the government spends millions of dollars to protect and clean-up areas affected by run-off pollution.

The Fossil-Fuel Industry: Another major source of water pollution is the fossil-fuel industry. Burning fossil fuels releases nitrogen oxide and ammonia into the atmosphere, both of which come back down to Earth as ingredients in acid rain and smog.

Mountaintop removal mining—or blowing the tops off of mountains to get at the coal deposits inside them—“has buried nearly 2,000 miles of Appalachian headwater streams, some of the most biologically diverse streams in the country,” states the Union of Concerned Scientists.

Oil and natural gas pipelines threaten local water supplies, as well, from run-off from their construction to their high potential for spills and explosions.

Finally, hydraulic fracturing, or fracking, for natural gas is also causing widespread ground- and surface water pollution. In December of 2016, after a six-year study and years of anecdotal evidence from communities near fracking operations, the EPA finally noted that fracking causes drinking-water contamination during every stage of its cycle. The Environmental Defense Fund notes that state data confirm more than 1,000 cases of water contamination across the US from fracking operations.
Other sources: Pollution from other industrial sources has also contributed to our drinking-water problem. For example, in 2016, the EPA released a health advisory for PFOA and PFOS—chemicals used in non-stick cookware, carpets, and more—in US water supplies. The agency says exposure to these chemicals could result in hormone disruption, developmental harm, and cancer.

The EPA’s advisory is non-regulatory but urges water facilities to test for PFOA and PFOS, and take steps to lower levels.

Toxic drinking water affects everyone. But communities of color are often the first hit by water pollution. Flint’s population, for example, is 63 percent people of color overall. And Lowndes County, AL, has raw sewage bubbling up in yards due to an egregious lack of reliable, basic infrastructure—primarily in Black neighborhoods, which make up 75 percent of the population.
What’s clear from the Flint case and others across the country is that we can’t count on our governments. We all have to work together to stop toxins from leaking into our drinking  water and harming the planet.

In the wake of the droughts in California and the water crisis in Flint, MI, the good news is that investments in clean water have been trending. If you want to get on board, start by screening your stocks for social and environmental responsibility.

For every Trimble Navigation, which offers water-efficient irrigation systems, there’s a Nestlé, privatizing and draining local water supplies and contaminating watersheds. An SRI financial advisor can help you screen your portfolio. Find an advisor at Green America’s Greenpages.org.

“Most water funds focus on the supply side, investing in water utilities, water infrastructure, and water technology companies,” says Jade Huang, a portfolio manager at Calvert. “Calvert invests in these companies, as well as looks for companies that are demonstrating leadership in their industry for their strong water stewardship or water re-use practices.”

In addition, shareholder activists have been using shareholder resolutions to pressure companies to take a cleaner approach to water. This season, the Interfaith Center on Corporate Responsibility filed three proposals asking meat companies to improve their water-stewardship policies. One at Hormel was withdrawn after the company made “substantial commitments” to strengthen its policies. Resolutions at Tyson’s and Pilgrim’s Pride earned enough support to appear on next year’s ballot.

Finally, Green America and our allies are encouraging people and institutions to divest from fossil fuels, which pollute air and water,
and warm the climate. Find our resources to help you divest.

Industrial agriculture has changed our relationship with the land—instead of picking a tomato by hand, many Americans pick it out of a lineup on the grocery shelf. But cultivating the land is a fundamental practice of humanity, stretching back millennia.