What Does Sewage Have to Do with It?

You wouldn’t think that here in America, there would be entire swaths of the population without proper sewer systems, resulting in raw sewage seeping into their yards and water tables. You would be wrong.

You would also probably hope that the substandard living conditions caused by the lack of affordable and failsafe sewage systems wouldn’t hit communities of color the hardest. But you’d be hoping in vain.

And you probably wouldn’t imagine that those same communities of color would do everything they could to get on the right systems, recommended by their municipal governments, and still have major problems with sewage leakage. And then would end up being legally prosecuted for it. However, that’s sadly true, too.

It’s a difficult series of scenarios to picture unless you live with it. Catherine Coleman Flowers has lived with it every day for the past 17 years. While working to promote equitable economic development in Lowndes County, Alabama, she discovered that people were being arrested for not having adequate sewage treatment systems, resulting in spills on their own property and others’. So she went to work trying to come up with a solution. And she’s still working.

Today, Flowers is the founder/CEO of the Alabama Center for Rural Enterprise CDC Inc. (ACRE), a community development corporation that works for water and sanitation equity.  It’s not a glamorous topic, but it’s oh, so necessary to tackle—for clean water, community dignity, and human rights.

Lowndes County sits in the middle of a region in Alabama known as the “Black Belt,” both for its rich, dense clay soils and for the fact that 74 percent of the population is made up of Black citizens. If you want to visit Selma, AL—the site of the Edmund Pettus Bridge, where Martin Luther King, Jr. marched with Rep. John Lewis and other civil rights activists to call for African-American voting rights—you have to go through Lowndes County.

That bridge is named for a former Grand Dragon of the Ku Klux Klan, which should tell you plenty about the state of racial justice in the region over the years, thanks to the legacy of slavery and virulent racism. The county itself earned the name “Bloody Lowndes” due to violent white suppression of civil rights activism, according to the Equal Justice Initiative (EJI).

While local and state governments brought basic infrastructure like good sewage systems to affluent, primarily white neighborhoods decades ago, many Black and low-income homes in Lowndes County just got running water in the 1990s. In addition, more than 35 percent of homes in the county have failing systems, and 15 percent have nothing but outhouses or a pipe that runs from the house to the woods.

Rural areas commonly aren’t within reach of municipal sewage systems, so households need to turn to septic tanks to control sewage. However, Flowers says that the clay soils in her region are “very good for growing crops,” but they’re terrible when it comes to burying on-site septic systems.

How a septic tank works, in brief, is that it acts as a mini-water-treatment facility. The tank holds water long enough for solids to sink to the bottom, forming a sludge. The tank contains the sludge and allows water to exit to a drainfield area, where it sinks into and is naturally filtered by the soil.

Dense clay soils, unfortunately, won’t absorb the water quickly enough, so much of it just sits there until it backs up.

“Septic systems inevitably fail because of the soil,” says Flowers. “And when they fail, “[the wastewater] ends up coming back through a bathtub or sink. Or people go out working and come back to a house full of raw sewage.”

The problem has gotten so bad that a newly released study from Baylor College of Medicine found that 34 percent of Lowndes County residents have tested positive for hookworm, an intestinal parasite that’s usually associated with the most impoverished corners of the developing world. The parasite enters the body through the soles of the feet and causes
anemia, weight loss, fatigue, and impaired mental function. 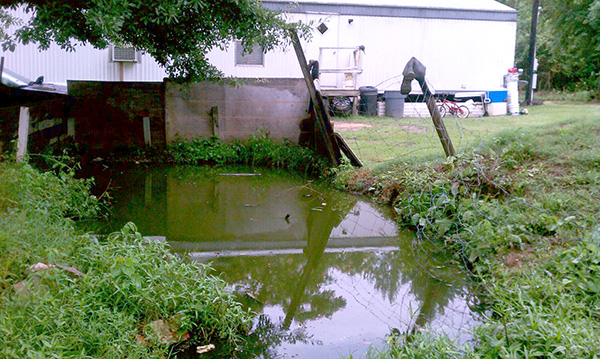 A home in Lowndes County, AL, with sewage seeping into the back yard after a septic tank failure. Courtesy of ACRE.

Both Black and white households in Lowndes have to deal with the problem of leaking sewage—and the health risks and drinking-water contamination that come with it. But the problems of the Black families are often compounded by unequal treatment by local authorities.

“The state should have some accountability; they’re recommending septic systems to residents that just simply don’t work,” says Flowers. “But when those systems fail, the state ends up prosecuting people for not complying [with the law].”

It’s a pattern Flowers has seen over and over again, but only for one segment of the community, she says: Business owners get their problems taken care of or at least patched, while Black residents get fined or arrested—even when they’ve tried in good faith to take care of the issue themselves.

Many households have been fined up to $500 a day after their septic systems fail. But there’s no good alternative for replacing them—Flowers says there are currently no septic systems that will work adequately in clay soils.

“Compound this with the fact that the climate is changing, and we’re getting more rain,” she says. “Whenever it rains, we can anticipate a septic system will fail because the ground is saturated with water. So the tank fails more quickly, and the sewage comes back into the house.”

In addition, at around $6,000, the tanks are often too expensive in the first place for many low-income households.

Despite the Sisyphean nature of the problem, people have even been arrested for lack of compliance. Flowers cites the example of Bishop Ira McCloud, pastor of the Jesus Christ Church of God the Bibleway of the Apostolic Faith in Brundidge, AL.

The church’s septic system failed shortly after it had purchased its current building. And in the summer of 2014, an adjoining property owner complained to the health department after sewage from the church started flooding his property.

Municipal sewer lines ran directly behind the church’s property. “But instead of allowing church to connect, the state went the other route and prosecuted,” carting the pastor off to jail, says Flowers. “The pastor was a Black man who had never been arrested before.”

Bishop McCloud was cleared of all liability in court in 2015 due to a corporate loophole. While the prosecuting lawyer claimed that the church refused to connect to the municipal system because it couldn’t afford to, Bishop McCloud noted that money isn’t the problem—it’s the lack of basic, commonsense help coming from the government that is.

After the case against him was thrown out, McCloud successfully hired an attorney to sue the city so it would allow his church to connect to the municipal system.

Today, Flowers and ACRE work on two fronts: They help set up residents on sewage systems—preferably a municipal system, but barring that, they’ll install doomed-to-fail septic tanks as a Band-Aid solution. And they assist people targeted by unfair prosecution over their sewage situations.

While much of ACRE’s work takes place in Alabama, Flowers says the problems in Lowndes County also occur across the country, so she travels from state to state, drawing attention to their sewage issues, too. In fact, that’s why she’s currently working on a book, documenting the sanitation issue around the country, from California to Mississippi to New Jersey.

“It’s America’s dirty secret,” she says. “It’s an issue of inequality, of the negligence of rural communities.”

She’s also hoping to team up with a major entity like the Gates Foundation—which in the past has funded water treatment in the developing world—to hold a “wastewater challenge,”asking inventors to come up with a septic system that truly works in clay soils.

“Flint, MI, raised the bar quite a bit. When people talk about Flint, it was flawed infrastructure. We’re talking about flawed and no infrastructure,” she says. “Even after 17 years, I’m still hopeful we can find something that’s affordable, that takes into account climate change, and that works.”

The Alabama Center for Community Enterprise CDC, Inc. (ACRE) works for water and sanitation justice in Alabama and across the US. 334/269-1803

Join Green America’s “Toxic Drinking Water” webinar.  This fall, Green America is conducting a webinar on the water-related topics discussed in this issue of the Green American. Catherine Flowers will be one of our featured speakers.

How Can Your Business Support Reproductive Rights?