The Skinny on Alternative Sweeteners

Most Americans are eating 122 grams of sugar per day or more, rather than the 30-45 grams most experts recommend.

With the sweet fructose that makes up 50% of sugar linked to increased rates of obesity, diabetes, stroke, heart disease, and even Alzheimer’s, it’s no wonder that many people are turning to alternative sweeteners to replace it. But are they any safer?

Download a printable poster [PDF] version of this chart » 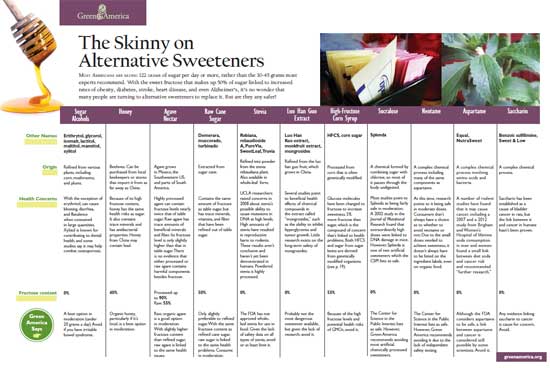 The Skinny on Alternative Sweeteners
Sweet, Seductive, and Deadly
Making Sugar Fair (and GMO-free)
FrankenSugar
9 Ingredients to Watch Out For
9 Tips to Help You Kick the Sugar Habit
Learn about our sponsor.

Is It Greenwashing? Or Is It A Sustainable Business?

What do all these words have in common?

They don’t mean anything! These marketing buzzwords are meant to grab your attention, but none prove the sustainability of the product or the company.