To truly tackle food insecurity, activists take on racist systems and language by standing up to food apartheid.
By
Ayelet Sheffey and Margaret McAden

Above: Liz Abunaw is the founder of Forty Acres Fresh Market, a pop-up market that brings produce to communities in Chicago’s West Side. Photo by Ofu Takor.

You may have heard of food deserts, which refer to areas void of fresh, affordable food, but the term “food desert” does not challenge systemic racism. This is why more people are using the term coined by food justice activist Karen Washington, “food apartheid.”

America's food system, like so many other systems, too often overlooks communities of color. The term "food apartheid" encompasses the systematic lack of access to healthy foods and takes into account race, geography, and economics. This intersectional approach to understanding America’s food system attributes a lack of access to healthy food, which disproportionately affects communities of color, to our country’s history of systemic racism.

Hanna Garth is a food systems-focused anthropology professor at the University of California, San Diego. Garth—who is headed to Princeton University in 2021—says it is important to recognize what has led to these racial disparities in food quality and access.

“The ways in which these neighborhoods have come about through racist policies of redlining and other forms of systematic discrimination have really bred the types of food apartheid that we see today,” Garth says.

At the beginning of the 20th century, Black farmers had acquired approximately 15 million acres of land. Now, those Black farmers have lost over 90 percent of that historically owned land, and fewer than nine percent of America’s farmers are African American, according to the 2017 USDA Census of Agriculture. A series of discriminatory practices—stemming from slavery—have criminalized Black people and forced Black farmers from the land.

Liz Abunaw founded Forty Acres Fresh Market in response to lack of fresh food in Chicago’s West Side. She sees firsthand how food apartheid has affected the Black community.

“I find it to be a cruel irony that the people who basically built this country, were our country’s first farmers who were so tied to the land, now live in land where they can get nothing that comes from the land,” Abunaw said in an interview with CBS News.

Food apartheid is an issue that needs to be addressed not only on a nationwide scale, but within every affected community. So where can you start?

Leah Penniman, food sovereignty activist and farmer, spoke to Green America for our summer 2020 article “Unearthing the Legacy of Black Farmers” about the steps that people can take to make the food system more equitable from production to people’s plates. 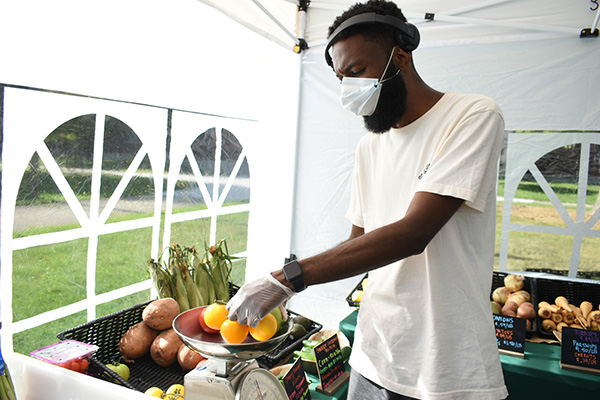 Here’s what you can do to fight food apartheid in your community:

Bring your community together to raise funds so that your local farmers can provide fresh food at accessible prices to those who are living in food apartheid. Corbin Hill Food Project in New York City and D-Town Farm in Detroit—two Black-led initiatives— both have models that outline ways to do this.

To implement lasting change, policymakers need to have food justice on their agendas. Contact your elected officials and urge them to support H.R. 40, legislation which would establish a commission to study reparation proposals for African Americans and create a debt forgiveness program for Black farmers.

Advocate for legislation that will eliminate food apartheid by reforming labor laws and providing a living wage for farmers of color. You can also encourage farmers you know to join the Domestic Fair Trade Association, which works toward fair labor standards in agriculture.

Supporting Black-owned farms and businesses is another way to help sustain change in the food system.

“If you’re someone that gets a CSA (community supported agriculture) box, you can make a concerted effort to get your CSA box from an urban garden or organization that is from one of these communities,” Garth says.

Do you have passion for photography, or are you an accountant? Look for food justice organizations that need volunteers to perform specific duties. Garth has found that many organizations are saturated with unskilled volunteers, but she says organizations may have specific needs that you can fill.

Penniman says that many overburdened farmers could use help with the administrative parts of running a farm, such as marketing, web design, or grant writing.

A Green America supports both people and planet. By fighting against injustices, like food apartheid, we invest in the world we hope to see.

Mutually Inclusive
6 Ways to Protest in a Pandemic
Reduce Your Waste in Five Days
The Best Children's Books for Your Little Eco-Warrior
5 Foods to Boost Your Immune System
Activism Basics: How to Advocate for Change
Support Black-Owned Business with #BlackandGreen Body Care
Green vs. Greenwashed: Non-Toxic Hand Soap, Cream & Sanitizer
Fighting Food Apartheid
DIY: Indoor Worm Composting
Your (Kids') Guide to Staying On Task
Meet Our Members: Interview with Brady Quirk-Garvan
GA's 2020 Green Economy Victories
Gardening for Beginners: Your 15-Minute $15 Garden
Time for a New Refrigerator? Find Out with These Questions
Save Money and Reduce Your Footprint with an Energy-Efficient Home
Learn about our sponsor.