Plant a Garden, Cool the Planet

woman in her garden with plants and watering can

During WWI and WWII, Europe’s ravaged farmlands were no longer capable of producing large amounts of food, which led to a famine that affected Allied soldiers. In 1917, under the leadership of President Woodrow Wilson and then head of the US Food Administration, Herbert Hoover, the US government asked its citizens to support the war effort by starting “victory gardens” to grow their own food so that more food exports could be sent overseas.

Today, leaders in Green America’s (Re)Store It! campaign are promoting the same sense of urgency and collective action by encouraging people to plant “Climate Victory Gardens.” Rather than assisting in a war effort, these local gardens help combat an impending threat that jeopardizes everyone: climate change.

Not just any old garden will have the climate impact Green America aims for with this campaign. The key to transforming traditional community gardens and urban farms into climate gardens, or gardens capable of sequestering carbon, is in embracing gardening principles that protect soil health and biodiversity. 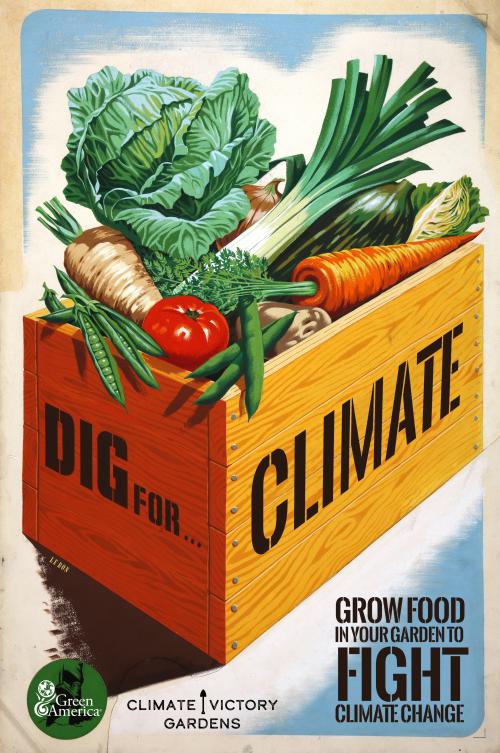 Newly launched, (Re)Store It! aims to promote regenerative agriculture, a type of farming that turns dead or degraded dirt into rich, biodiverse soil that acts as a carbon sink. A worldwide switch to regenerative farming could reverse climate change. Scientists with Project Drawdown, a nonprofit founded by bestselling author Paul Hawken, conservatively estimate that regenerative agriculture will increase by 1 billion acres by 2050, which would draw 23.2 gigatons of CO2-equivalent from the atmosphere.

“We wanted a tangible way for people to engage with our (Re)Store It! campaign,” says Green America food campaigns director Anna Meyer. “Climate Victory Gardens are a way for everyone to help turn soil into a powerful carbon sink.”

The campaign asks gardeners to commit to ten regenerative gardening principles that serve both the environment and the soil. Each climate victory gardener makes a pledge to: grow edible plants, keep soils covered, encourage biodiversity, plant perennials, ditch chemicals, compost, integrate crops and animals (not a must, but integrating animal manure and possibly chickens can make soil richer), use people power and not mechanization, rotate plants and crops, and get to know their garden and understand its efficiency and what works best for it.

“It’s about making sure that you’re growing a diverse amount of plants and that you’re building up soil that has major biodiversity in it,” she says.

Meyer recommends that new gardeners get their soil tested, especially if they suspect there could be chemicals in it. For example, “if you’re living in an urban area with a history of lots of traffic, your soil could be very lead-heavy from when gasoline had lead in it, as recently as 1995,” says Meyer.

Urban food gardeners with contaminated soil may need to construct raised beds and bring in clean soil for safety. But, says Meyer, “if your urban soil is safe or easily rebuilt, our preference is for planting in the ground. It has more of an impact in terms of carbon sequestration and building up healthy, biodiverse soil.”

The Climate Victory Gardens campaign will soon launch a website that will link victory gardeners to more resources, including gardening instructions, equipment suggestions, and advice. It will also map climate gardens across the US.

Though likely small in size, Climate Victory Gardens have the potential to enrich entire communities. The increase of local food production spurred by gardens also cuts down on the transportation needed to export foods into various cities, thereby reducing CO2 gas emissions. And as people learn about the importance of climate gardening at home, Green America hopes they will start demanding food grown with regenerative techniques.

“It goes along with the saying that it’s not about a stone; it’s about the ripple it creates,” says Meyer. “In the case of Climate Victory Gardens, that ripple spreads outward in the form of community engagement and educating a generation about climate change—all while we work together to stop the climate crisis.”