The popularity of smart thermostats is on the rise. Devices like Google’s Nest use a feature called “geo-fencing” to use sensors in your home and the signal on your mobile phone to turn themselves to an eco-friendly lower setting while you’re away. Some take a few days to learn your heating and cooling habits, then adjust your thermostat accordingly while you’re in your house or apartment, or will allow you to program and schedule settings. Many will give you regular reports on how much energy you’re saving and send you warnings if the temperature ever plummets to the point where a pipe could burst.

You can also find smart lighting that you can dim, brighten, shift colors, and turn on and off via an app. Or smart switches that allow you to turn the devices they’re connected to on and off, program them to a timer, or even check for “phantom load” power leaks (energy that drains from a device when it’s turned off) via an app. And then there are full-house monitors that connect to your breaker box and monitor your energy use all throughout your home, generating energy-use reports and pinpointing energy drains (say it with us) via an app.

Sounds nifty, right? But nearly all the new energy-saving tech Green America’s editorial team found requires a wireless connection. And, say many experts, wireless devices may not be the healthiest things you can bring into your home.

The good news is, you can cut your home energy use by 50 percent or more without wireless. 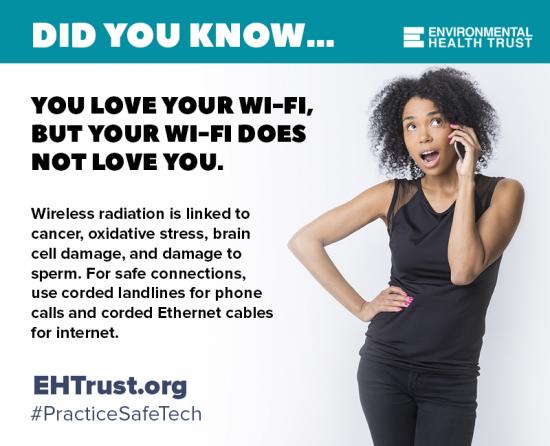 Back in 2011, the Green American sounded a warning about EMF radiation, particularly that emitted from cell phones, since people hold them close to their heads and bodies.

EMF radiation is produced by electricity as it moves through a wire. The National Cancer Institute notes that there are three different types of EMF radiation: extremely low frequency EMFs, like those emitted by electrical wiring and corded devices. On the other end of the spectrum are high-frequency EMFs like X-ray and gamma-ray radiation that are known to damage DNA, which can lead to cancer.

In the middle, you have radio-frequency EMFs, which are emitted by wireless networks, smart meters, cordless phones, and cell phones.
These wireless devices can harm human health, says Dr. Devra Davis, a scientist who is the president of Environmental Health Trust, lectures at top universities and medical schools, and literally wrote the book on cell phones and EMFs: Disconnect: The Truth About Cell Phone Radiation, What the Industry Has Done to Hide It, and How to Protect Your Family (Dutton, 2010).

“All wireless devices from smartphones to wireless laptops to baby monitors come with FCC warnings that they are not safe to use if held directly on the body because the radio frequency emissions can exceed government limits,” says Davis. “There is a growing body of experimental evidence showing that cell phone and wireless radiation is linked to miscarriages in pregnant women, lower sperm counts, increased brain tumors, and changes in blood markers that can lead to inflammatory conditions like arthritis and cancer.”

Cell phone and wireless radiation are the same type of radiation, says Davis. But cell phones are more of a worry since most people place them directly next to their heads, and children are handed them as toys.

“Every millimeter away gives you 15 percent less radiation,” says Davis.

But, she notes, wireless devices in close proximity to our bodies may still expose us to unhealthy amounts of EMF radiation: “For many smart tech devices, whether it’s a dryer, fridge, washing machine, we don’t even know where the wireless components are implanted. We don’t know where they’re located, how often they’re on.” And that, she says, could be a problem.

In recent years, more and more respected bodies have issued warnings on wireless and cell phone radiation, particularly with children, whose bodies absorb more of it than adult bodies do.

In 2011, the World Health Organization classified radio-frequency radiation from cell phones, wireless, and other devices, as a “possible human carcinogen,” the same category into which it places jet fuel and lead.

In 2011, researchers from the National Institutes for Health released a study that found altered brain activity on PET scans when a cell phone was held up to a person’s head.

In December 2017, the state of California issued guidelines to help reduce children’s exposure to wireless and cell phone radiation.

And in February, the National Toxicology Program released the results of a multi-year study on mice and rats. It found that male rodents exposed to high levels of EMF radiation grew rare, malignant tumors in the brain and heart.

“Genome research shows that humans differ genetically from rats by three percent,” says Davis. “Every agent that we know causes cancer in humans will also produce it in animals when adequately studied.”

In addition, Davis points out that the fine print in most cell phone user manuals generally warn people to keep the phones about an inch from your body, and away from pregnant women.

Save Energy Without Wireless

While new technology can make saving energy easier to do from your couch, it’s very possible to drastically cut your home energy use without it.

In our 2010 Efficiency First! issue, we laid out techniques for improving your home efficiency by 50 percent. Find our handy, updated infographic to help you do.

For example, you can easily find an inexpensive, non-wireless programmable thermostat. Just programming your thermostat to heat or cool less when you’re away or sleeping can cut your home energy use by ten percent.

And you can check for phantom load energy leaks with a Kill-a-Watt meter, which will measure the energy drain of devices and appliances you plug into it.

For a more comprehensive take on plugging energy leaks, call in a Home Performance with ENERGY STAR auditor who will pinpoint areas where your home is wasting energy and give you suggestions to fix them, in addition to flagging indoor-air pollution sources.

For a DIY approach to an audit, the free Homeselfe app (iOS, Android) takes you step-by-step through your home, asking you questions about your energy use, then generates recommendations to help you make your home more energy efficient. It even connects you with local energy rebates for which you may be eligible.

Finally, installing LED bulbs uses 75 percent less energy than incandescent bulbs, and the average US home will save over $1,000 over a ten-year period, according to a 2017 cost analysis by the Consumer Federation of America.

Use these tips from Environmental Health Trust to keep yourself and your family safe from cell-phone and wireless radiation: