The Bright Future of Solar Power

By
Eleanor Greene and Sytonia Reid

Solar is booming. Solar power is now cheaper than coal in some parts of the world, and generating power from the sun is likely to be the lowest-cost energy option globally in less than ten years, according to Bloomberg. In many places around the world, solar is already the lowest-cost option.

Even the big utilities are moving rapidly toward solar (and wind, which is also poised to best coal in terms of cost). The New York Times reports that Xcel Energy—which provides electricity to the middle of the country, from Colorado to Texas to Michigan—has asked for proposals to build large wind and solar power plants in Colorado, and bids are already coming in lower than the operating costs for coal plants. West Coast energy provider Pacific Gas & Electric has committed to making renewable energy, including solar, 55 percent of its power portfolio by 2031. Many experts think that California will hit the 50 percent renewables mark by 2025—maybe even sooner.

Solar for Every Home

Sunflare, a Los Angeles-based startup, is looking to become the next solar heavyweight with its lightweight panels. Compared to conventional solar panels, Sunflare’s panel products have the same metallic blue look, but not much else in common.

The company’s panels are thin, flexible, and lightweight. Instead of silicon and glass, Sunflare uses a stainless steel substrate with copper, indium, gallium, and selenide to make a semiconductor that’s only a few micro­meters thick. 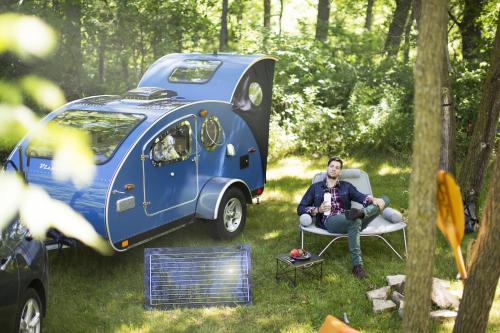 Rectangular Sunflare panels come in both standard and custom sizes. With super-thin panels come more possibilities. Rather than relying on heavy aluminum frames and skilled installers, Sunflare panels will stick almost anywhere with a special adhesive, and because they’re flexible, they can follow a curve instead of being limited to flat installations.

If a branch shades a traditional solar panel on a home’s roof, it will trigger the shutoff of that panel or a series of panels, explains Sunflare’s chief marketing officer Elizabeth Sanderson. She notes that Sunflare panels have more diodes that help bypass just the shaded area. In addition, these unique panels can be used with off-grid homes that can’t support regular panels, like trailer homes, tiny homes, or RVs.

One of Sunflare’s first customers stuck the panels onto her tiny home in Spain, allowing her to live off the grid. And Vistabule, a camping-trailer manufacturer, has worked with Sunflare to incorporate panels into the roof of its teardrop-shaped trailers.
Sanderson says she’s excited about the products’ commercial applications: “Silicon panels are four times heavier than the Sunflare panels.

Warehouses and distribution center roofs often can’t handle that kind of weight. Also, commercial building owners aren’t very happy when they have to puncture their roofs to install racking. But they are happy with Sunflare installation; it’s peel and stick. And the panels are durable and can provide more insulation for the building. It’s a win-win-win.”

Because Sunflare is in the initial phases of scale-up and in the beginning of its technology lifecycle, its prices are about 50-100 percent higher than traditional panels. However, that gap narrows as you take its much cheaper installation costs into account. Sunflare is currently ramping up as it awaits safety certification for commercial membrane roofs this month.

Of course, one can’t talk about new ways to integrate solar without talking about Tesla. With its big money and perpetual media buzz, Tesla has moved quickly from the car industry into residential solar.

In the past, one big concern with solar was how to store power generated during the day for use at night. In 2015, Tesla launched its Powerwall, a giant solar-storing lithium ion battery that solves that issue. Each Powerwall battery can hold ten Kilowatt hours (kWh) of electricity. By comparison, a car battery holds about 1.2 kWh.

The Powerwall is the best-known of a few products that let people store solar energy. LG, Panasonic, BMW, and Nissan, as well as several start-up companies, all sell “home batteries” similar to the Powerwall. (Nissan uses recycled batteries from
its electric cars to power its xStorage battery, which is about $1,000 cheaper than Tesla’s.) 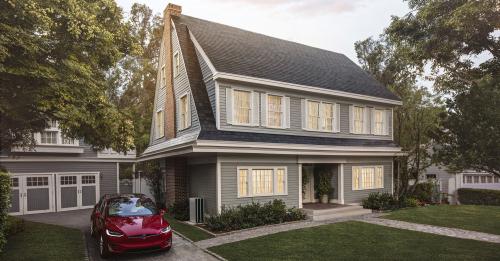 Tesla began taking orders for its Solar Roof last May. Solar Roof tiles look identical to regular roof tiles—whether you have basic gray shingles, slate tiles, or clay Spanish tiles. But Tesla tiles generate solar power, invisibly. The Solar Roof currently comes in four styles and can be installed on the entire roof or just on the sunny side.

Consumers thought it would be years or decades before the Solar Roof would hit the market. But in January 2018, Tesla confirmed that the roofs had been installed on homes of company executives, and installation has begun at the homes of non-employee customers.

Tesla has an online calculator to estimate how much you’ll spend on a Solar Roof per month based on the size of your roof, minus the value of the energy your Solar Roof would generate and any available tax incentives. For Green America associate editor Eleanor Greene’s 990 square-foot roof in Washington, DC, and $90/month energy bill, the calculator estimated her net cost at $37/month (compared to an average $22/month for regular roof shingles) over the 30-year life of the roof’s solar capacity.

Tesla guarantees the tiles will last through the life of your house (or infinity, whichever comes first) even if the solar capacity stops working after 30 years.

Tesla recently announced it would put kiosks in 800 Home Depot stores across the country to sell its solar panels, Powerwall batteries, and Solar Roofs, and Lowe’s is in talks to sell Tesla solar products as well.

Though they may sound like an enviro-fantasy, solar windows could be on the market soon. A solar window is a transparent glass window that uses sunlight to create electricity, just like a solar panel. 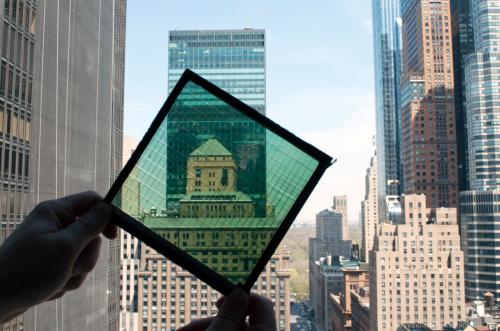 Bad news first: solar windows are still in the development stage in the US. The purpose of a window is to let light through, but solar window technology requires striking the right balance of captured light for energy and remaining light that can brighten a room.

The good news is that companies in the US and abroad have produced solar windows that work, suggesting that these technologies may be available to consumers sooner than we think.

Once it reaches the commercialization stage, the Maryland-based company plans to use these windows to turn skyscrapers into vertical power generators.

“Our company is essentially writing the chapter on large-area commercialization of organic photovoltaic devices and panels,” says CEO John A. Conklin.

Buildings consume 40 percent of electricity in the US, and the company anticipates that SolarWindow coatings could cut the annual $150 billion dollars it costs to pay for their electricity in half, according to company models, which feature SolarWindow on all four sides of a commercial building.

In addition to its commercial glass products, the company is developing window glass for residential homes.

Meanwhile, Physee, a power company in the Netherlands, has patented similar solar windows made with transparent double-paned glass. Physee has already successfully installed these PowerWindows in commercial office buildings in Amsterdam’s Zuidas business district and plans to install 1,850 square meters of them in Amsterdam’s BOLD apartment high-rise.

In June 2017, Australia’s Royal Melbourne Institute of Technology (RMIT) announced that its researchers have developed a solar paint that could eventually generate solar power on its own.

Led by Dr. Torben Daeneke, the team invented a paint made with titanium oxide, a common ingredient in paint and sunscreen, and synthetic molybdenum-sulphide, a compound that absorbs moisture in the air. The chemical combination uses both sunlight and moisture to convert water into hydrogen fuel, as well as oxygen.

Dr. Daeneke explained to the Sydney Morning Herald that the final product of the paint would need to include membranes that can harvest hydrogen selectively for energy use.

In the past, hydrogen energy has depended on unclean processes like the burning of fossil fuels. RMIT’s paint demonstrates that hydrogen can be a clean energy source when hydrogen is generated with renewables.

Solar in the City

Danny Kennedy has been in the solar business a long time, as a clean energy advocate at Greenpeace in the ’90s who went on to found rooftop solar company Sungevity in 2007. He’s part of Green America’s Solar Circle, which has brought together industry leaders to push the solar industry into quicker progress since 2002. Now, Kennedy works with green entrepreneurs at the California Clean Energy Fund, an early stage fund for clean-energy projects, and Powerhouse, an incubator for clean-energy startups.

He’s excited about anything that makes solar easier to get to customers. But what he really gets a kick out of is seeing people starting to put solar panels in unexpected places—like solar-powered trash cans from Bigbelly. (He doesn’t have a working relationship with this company.)

“Who knew you needed that? Because solar is cheap enough for people to put an engine in a trash can, municipalities can buy trash cans that compact the trash and can call to be emptied when they’re full,” Kennedy explains. “The result is less litter on the streets and more efficient litter collection, which saves cities tens of thousands of dollars.”

Kennedy names bikesharing systems as another model that wouldn’t be the same without solar—especially dockless systems like that of the company Mobike, which Kennedy met with last summer. Mobike bikes have a solar panel in the bike basket, connecting the bike’s lock and GPS to a phone app, so customers can easily locate, reserve, and unlock the bikes they want to use. Without solar, the whole automated process would require a very expensive battery, Kennedy says. He adds that providing more bikeshare options means fewer trips by car, so it decreases traffic pollution and congestion.

In 2016, solar became the fastest growing source of energy in the US, and the biggest employer of all energy industries, with around 370,000 employees, compared to 187,000 in all fossil fuels combined, according to the US Department of Labor. The price of solar fell 165 percent from 1975 to 2015, as the megawatts installed globally surged from two to 65,000 in the same period, according to a report by Bloomberg and the Earth Policy Institute.

Given the harsh realities of the climate crisis, the world’s impending approach to peak coal and peak oil, and the rapid adoption of solar worldwide, Kennedy says the future looks very bright indeed for solar power, and he expects more solar innovations to
keep coming.

“The US pioneered something world-changing, literally,” says Kennedy. “Photovoltaics, invented by Bell Labs in 1954, already have and are going to continue to completely transform civilization until we become a completely solar-powered society.”

Smart Tech for a Greener Life
Green Tech for the Future
Smarter, Safer Energy Savers
The Bright Future of Solar Power
A Living Building? Challenge Accepted
Climate-Friendly Fridges That Are Truly Cool
Smart Homes and Privacy
Staying Connected the Old-Fashioned Way
At Home with a Green Architect
The Color of Justice
Plant a Garden, Cool the Planet
Learn about our sponsor.

As Shareholders Vote at JPMorganChase, SEC Seeks to Weaken Proxy Power
(May 27, 2020)