Author Beth Porter on the challenges and opportunities of the US recycling system.

Late last year, Green America’s climate and recycling director Beth Porter released her first book, Reduce, Reuse, Reimagine: Sorting Out the Recycling System (Rowman & Littlefield, 2018). The book takes a comprehensive and engaging look at our recycling system in the US: what’s good, what’s not so good, and how we can pitch in to make it better.

Green American editor-at-large Tracy Fernandez Rysavy talked to Beth about what it will take to fix what’s broken in our recycling system, and how we can maximize our recycling—and our reuse—at home. 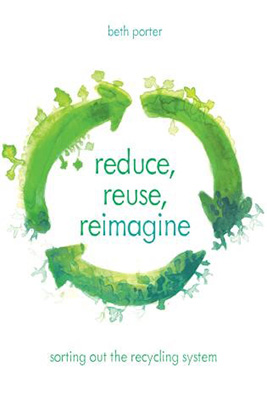 Green American/Tracy:  You note in the book that the US recycles only 34 percent of our waste. How does that compare to other countries?

Beth Porter: It depends on what part of the world we’re talking about, because some countries have more developed waste management structures than others. Germany, Sweden, and Taiwan’s recycling rates are twice that of the US’—60, 62, and 64 percent respectively. So we could do much better.

There are a number of reasons we’re stuck and we’ve been stuck for decades now. A lot comes down to consumer confusion, not just about what to recycle, but also on communicating the why. There’s so much emphasis on the fact that we should recycle, and that’s it. People ask me, “What is the return on my investment? What are the results of complying with these rules?”

People want to know recycling is worthwhile and that it is actually good for the environment. [Proving those things] could really escalate recycling rates.

Green American/Tracy: How do you answer people who ask you these questions?

Beth Porter: Recycling is a big job creator. Roughly 600,000 people in the US work in recycling, but worldwide, that number is much higher. For one job created at a landfill, ten jobs are created in recycling, because there are more processes involved in recycling.

Most of us think of the disposal benefit: recycling helps keep stuff out of landfills and reduces the need for incinerators, which have a lot of negative impacts.

Recycling also displaces the need for extraction of new, virgin materials for products, by taking all the stuff we put in our recycling bins and using it in manufacturing and new production, so we don’t need to do so much heavy mining and deforestation. Also, lower amounts of energy are used when manufacturing facilities process recycled materials instead of new, virgin materials, because recyclables have already been through processing.

Green American/Tracy: You mention “moral licensing” in the book, where people engage in good behavior, but then reward themselves by indulging in not-so good behavior. How can we overcome moral licensing, so we recycle and reuse more?

Beth Porter: I found studies showing that when people have local recycling programs, they tend to waste more. It’s the most responsible disposal method, but it doesn’t erase the responsibility to use fewer resources.

The moral licensing phenomenon seemed at first like human nature—like “I worked out this morning, so I’m having a piece of cake.” (And I’m certainly guilty of that!) But in Europe, it’s not as common. In southeast Asia, it’s very minimal. Consistent behavior is more important there than swinging on the pendulum of good action, bad action, good action.

Curbing moral licensing happens at an individual level. A big thing we can do is try to observe ourselves when we buy something unnecessary or pick up a single-use item—be aware and take a pause. When we take a pause, we interrupt this behavior.

Green American/Tracy: While individuals can do a lot to curb waste, companies need to act, as well. On that note, I was fascinated by your discussion of “planned obsolescence.” Can you talk more about that?

Beth Porter: Planned obsolescence is  when companies design products to have a working expiration date from the moment they’re produced. Common examples are electronics, smart phones, automobiles, even textbooks—anything we know has a shelf life or time limit that starts from the moment we produce it.

There’s a big push in the US called “the right to repair.” There are right-to-repair laws introduced in 18 states to guarantee that electronics would be able to be repaired by a wider selection of businesses than currently exists.
For example, Apple products under warranty can only be repaired by authorized Apple service stores, or you void the warranty. These practices incentivize us to buy stuff and dispose of it quickly, since we’re not able to easily repair items that are pretty much essential.

France is implementing clever policy mechanisms to attack planned obsolescence. In 2015, it passed a law demanding that French manufacturers and vendors explicitly state a product’s estimated lifespan on product labels. Manufacturers also must inform vendors how long spare parts for a product will be produced, so vendors can inform buyers. Failing to do so can result in a hefty fine. Additionally, France now directs manufacturers to provide a two-year warranty for all sales.

Ending planned obsolescence would result in a slight increase in product prices, but since you wouldn’t have to replace things so often, they’d be cheaper in the long run, and use fewer resources.

Green American/Tracy: What are the most common mistakes people make that contaminate their recycling?

Beth Porter:  If the wrong materials accidentally get into a batch of recycling during processing, they can ruin the entire batch. So we can take steps at home to help prevent this kind of contamination.

First, wish-cycling is a colloquial term for when we throw stuff in the recycling bin and don’t know if it’s recyclable, but we hope it is. It’s a well-intentioned habit, but it can make recycling less effective and less profitable. People think, “My plastic fork, paper napkins, and batteries are made of recyclable materials, so I’ll put them in my bin, and someone will sort it out.” It’s true, someone will, but adding in things that aren’t accepted for curbside recycling slows down the system, adds extra transportation-related emissions, and increases costs for recycling facilities. Wish-cycling batteries and electronics has increased fires in trucks and in recycling facilities, too.

Plastic bags are a big one you should leave out of your bin. They are recyclable only through those special drop-off boxes at your local grocery store. If you put them in your curbside bin, they can get erroneously sorted at recycling facilities and cause contamination, because they are flimsy. But the biggest problem is they can get caught in machinery and can shut down the entire facility for the time it takes to remove them. In fact, avoid wish-cycling anything that can tangle in machinery: bows from gifts, garden hoses, string, and so on.

Instead of wish-cycling flimsy plastic, you can go to Plasticfilmrecycling.org to see all the types you can recycle at your grocery store—dry cleaning bags, zip-lock bags, films that wrap toilet paper, etc.

Broken glass is also a pretty big contaminant. Glass is infinitely recyclable, but broken glass can ruin batches of other recyclables. Worse, it’s hazardous for people hand-sorting recycling. Companies have safeguards, but it’s important to remember there’s someone on the other side of the bin.

Contamination can also happen when we put something with food or beverage residue into our bins. Make sure things are empty and dry. Dump out excess food (obviously, food waste is something to avoid when possible, as well). Give items a quick rinse. Then towel or shake dry.

Green American/Tracy: What are the keys to fixing our recycling system in the US? Is it up to governments, or can individuals do something to help?

Beth Porter: Historically, a lot of the push to increase recycling programs comes from communities. In the book, I share stories of people who got recycling started or expanded in their communities. It’s necessary to force the hand of the government at times. Obviously, our political situation right now is not ideal for environmental issues, but surprisingly, recycling can be bipartisan. There’s a bipartisan recycling caucus in Congress.

Since recycling decisions are often made at the local level, there’s a lot of influence you can have just by letting elected officials know that these issues are important to you.

Also, share your knowledge about recycling rules. Be the friend people can text to ask if something is recyclable.

Beth Porter: [laughs] Yes. My boyfriend is so patient. Any time we had a dinner party and someone heard I was working on a book on recycling, they’d have, like, 30 questions.

You Home, Detoxed: Green American Feature
13 Toxic Chemicals Lurking in Your Home
The Room-by-Room Home Detox Guide
Planting Seeds for Clean Air
6 Simple Steps to a Safer Home
Turning Crisis into Creation with Green Affordable Homes
Swap Out Toxics to Green Your Home
Reduce, Reuse, Reimagine...and Then Recycle
Ready Your Finances for a Climate Disaster
Learn about our sponsor. 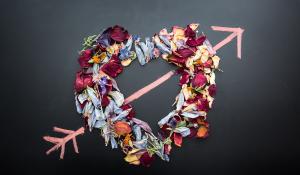