Big, rechargeable batteries are key to a green future. They’re required for electric and plug-in hybrid electric vehicles, which are a huge part of how the world plans to combat climate change. Norway, the UK, the Netherlands, India, and France have all set timelines for bans on the sales of new cars with fossil-fuel-powered engines. China has also made a commitment to phase out the combustion engine but hasn’t set a date. Home storage cells for saving solar energy generated by day for use at night, like Tesla’s Powerwall, have already mitigated reliance on dirty fossil fuels. But far from sleek electric cars and green homes, barefoot children and vulnerable adults make up the beginning of the green battery supply chain—all because these batteries they help create use a mineral called cobalt, a byproduct of nickel and copper.

The mining practices used to extract cobalt from the Earth involve child labor and dangerous working conditions. Even if you don’t have a taste for cutting-edge green tech, you’ve probably had your hands on something touched by problematic mining practices: Anything with lithium-ion batteries, including all cell phones, tablets, and laptops, uses cobalt.

Caption for header photo: A man enters a tunnel dug with shovels in a cobalt mine located 22 miles from the town of Likasi in the Democratic Republic of Congo. Schalk van Zuydam / Associated Press

Where Cobalt Comes From

Amnesty International and The World Bank estimate more than half of the world’s cobalt originates from the Democratic Republic of Congo (DRC). The DRC meets more than half of worldwide demand for cobalt through artisanal miners. (The rest comes from industrial mines in China, Australia, Zambia, and Russia.) Artisanal mining sounds quaint, but what it means is that miners don’t have an employer—they dig mines with shovels instead of power diggers and climb through them without safety equipment and without engineers to map out safe
mining routes.

An estimated 40 million people earn their living in artisanal mining (not just in cobalt), according to the World Bank. In comparison, industrial mining operations employ only seven million worldwide, meaning that most miners don’t have an employer.

Children as young as seven sift piles of ore coming out of artisanal mines, looking for pure cobalt. During this process, they may inhale toxic dust from heavy metals. The miners sell what they find to refiners at local markets, who may not give a fair price.

The Hazards of Cobalt Mining

Experts do not consider cobalt a “conflict mineral”—like tungsten, tantalum, tin, and gold—because the profits from the mines go to the miners, not to military groups for weapons purchases. But cobalt miners still have significant safety issues to worry about.

Amnesty International and Afrewatch’s 2016 report, This is What We Die For, compiled research about the human rights and health concerns of artisanal cobalt mining. The report highlights that since most miners do not have any safety equipment, they’re exposed to cobalt dust, which can cause asthma and breathing problems, and even a fatal disease called “hard metal lung disease.” One scientist from the University of Lubumbashi in the DRC told the Washington Post that a high number of premature births and birth defects may be linked to toxic exposure related to mining activity in the country overall.

Hand-dug mines, which can be up to 330 feet deep, according to the Amnesty report, are poorly ventilated and are prone to collapse. There aren’t official data on the number of fatalities, but a DRC radio station tracked more than 80 miner deaths between 2014 and 2015. The report says, “The true figure is likely to be far higher, as many accidents go unrecorded, and bodies are left buried underground.”

Child Labor at the Mines

The DRC government has promised to eliminate child labor in mining by 2025. But with 40,000 children working there in cobalt mining alone, the problem is “massively complicated,” says Mark Dummett, business and human rights researcher at Amnesty International. He doesn’t believe the DRC can eliminate child labor that quickly.

“You can’t just send police in and chase kids out of the mines. You need to put in place all kinds of measures: They need to go to school instead, so there need to be schools in place. There need to be economic incentives for parents as well,” Dummett says.

He’s heartened by the country making such a commitment though. When Amnesty came into the country to do research on the problem in 2017, a government official had denied any children were working in mining at all.

What Big Tech Can Do

Benchmark Mineral Intelligence analyst Caspar Rawles told Investing News Network (INN) that the supply for cobalt could become critical as soon as 2020, when most electric vehicles will come to market.

Cobalt mines do exist elsewhere in the world; Canada, Australia, and the US all have industrial mines that are far safer than artisanal mines and provide better pay. Even with new mines opening in these countries, both Rawles and Dummett say the demand for DRC cobalt will continue to increase.

“We forecast the DRC to become a bigger part of the cobalt supply pie, to become more dominant in the near term,” Rawles told INN. “There is no lithium-ion [battery] industry without the DRC.”

Tesla’s CEO Elon Musk promises that Tesla will only use cobalt mined in North America for its products, but Dummett thinks that won’t be possible because of the outsized portion of the supply that comes from the DRC.

Companies are racing to develop new batteries that use less cobalt content, so they won’t have to rely so heavily on the DRC, likely due more to the political instability in the country and the soaring price of the mineral, than to human rights concerns. But because the demand for lithium-ion batteries is so great for the booming electric vehicle market, Dummett says the demand for cobalt will rise even if the amount needed in each battery goes down.

The end game for tech companies wanting to be responsible is to tackle the health, safety, and human rights concerns around DRC cobalt mining.

“It’s very difficult for companies which rely on cobalt to avoid DRC cobalt, so they all have to address the problems [with mining in the country],” Dummett says.

In February, Apple announced that it would buy its cobalt directly from miners, instead of buying the complete batteries from manufacturers, which get their cobalt through refiners. Apple is looking to sign contracts for several thousand metric tons per year. Samsung, Tesla, BMW, and Volkswagen are all racing to follow suit, according to reports from Bloomberg.

Companies are making this change because the supply of cobalt is dropping while the demand is skyrocketing, explains Dummett. They’re not doing it to improve transparency. That said, by cutting middle merchants, companies are creating a system in which they could have a huge impact on the wages and safety of workers mining cobalt if they wished, as they’d have control over every step of the mining process.

“At the moment, these miners work in dangerous and exploitative conditions, because companies just want to buy the cheapest available cobalt, without caring about where it has come from,” Dummett says.

If they were working on the ground, , big tech companies could create an official industry where right now, artisanal mining is king. They could build mines that would pay adult laborers a fair wage, enough to feed their families and send their children to school, and provide safer conditions for mining.

Companies could also institute electronics take-back programs, to help increase the amount of old electronics that are responsibly recycled. Recyclers remove cobalt and other minerals from electronics so these minerals can be reused, which reduces the need to mine more.

To start creating change in the cobalt industry, Dummett says that companies like Apple that are securing multi-year cobalt supplies first need to zero in on where it comes from, especially if they have no sense now.

Shockingly, 26 out of the 29 companies—including smelters, battery manufacturers, and consumer-facing tech companies—that Amnesty International contacted about their supply chains said they could not or would not disclose where they got their cobalt. It’s possible that some may not know their full supply chains.

“We think there’s a good chance that cobalt that’s been mined in these dangerous artisanal mines has entered the batteries of every major [tech] company. No company was meeting what we consider to be [best practices for] responsible sourcing of minerals,” Dummett says.

Consumers can do the following to pressure companies to do better for cobalt miners and the Earth:

To reduce the need for new cobalt, it’s critical to recycle your old electronics—don’t let them sit in a drawer! 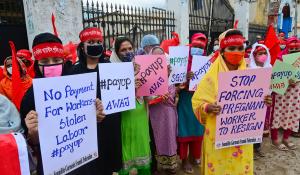 Above: RMG workers held a protest rally against the retrenchment and forced resignations of workers and firing of pregnant women caused by factory closures during COVID-19 pandemic in Dhaka on June 26, 2020. Photo by Mamunur Rashid.

Did you know there is a whole sector of American workers who do not have the right to organize, to overtime pay, or legal protection from workplace discrimination and harassment?